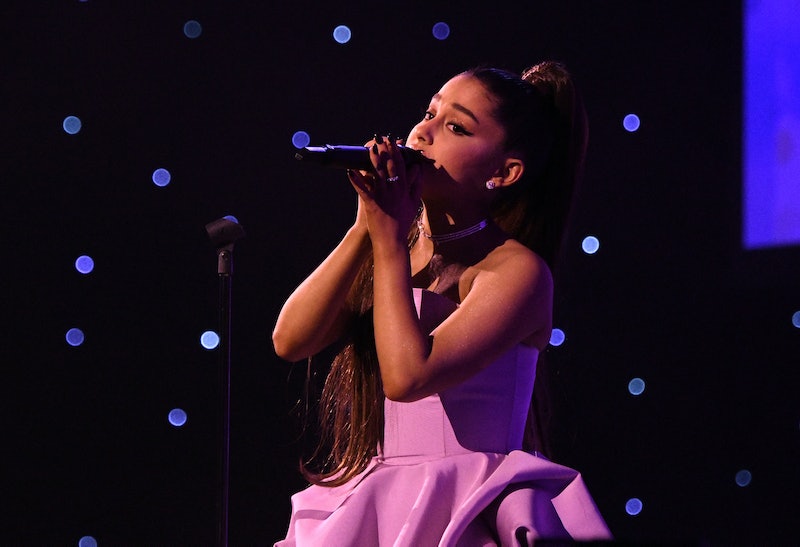 Have you noticed that a new mystery man has been making frequent appearances on a certain singer's Instagram page? His identity isn't that much of a mystery, though, seeing as how she almost always tags him in the pics. So, if you're wondering who is Ariana Grande's BFF Doug Middlebrook, well, then, all you have to do is go on social media.

If you do a little digging through both Grande and Middlebrook's social media pages, there's evidence that the pair has been friends since 2014 — at least. On Oct. 5 of that year, Middlebrook made his debut on Twitter, writing, "my first tweet. persuaded into it by @ArianaGrande."

While his presence on the platform was extremely short-lived — he posted a flurry of tweets for two months, but has been silent ever since — he tagged and shared photos of Grande's brother Frankie on more than a few occasions. Perhaps he was friends with Frankie first, and then his friendship with Ariana blossomed shortly thereafter? Who knows. What's clear is that he's been close with Grande and her family for quite some time now, but he appears to have a spot in her professional crew, too.

While it's unclear when and how the two initially met, they're certainly attached at the hip these days. Want proof? It's all over their respective Instagram pages.

Earlier this year, Refinery29 described Middlebrook as, "An Instagram influencer and Grande's best friend." The outlet also reported that he "keeps his personal life private," but his Instagram is filled with photos of him and his friends — Grande included.

In March 2016, Middlebrook posted a photo of himself alongside Grande, her former Victorious co-star and friend, Elizabeth Gillies (aka Mean Girls' Cady Heron in the "Thank U, Next" video), and their blogger bestie, Alexa Luria (aka Karen). "I love these Women," Middlebrook captioned the pic.

Clearly, Middlebrook isn't just a fringe friend to Grande. He's all up in her inner circle and has been for years. In January 2017, he shared another photo of himself attending the Women's March in Los Angeles with Grande, Gillies, and another Victorious alum: Matt Bennett (aka the guy brushing his teeth next to Grande in "Thank U, Next). Anyone else seeing a pattern here?

Of course, Middlebrook has other interests, too, outside of his famous friends. His Instagram reveals that he's a big fan of musical theater, and stans Barbara Streisand pretty hard, too. He's also spent some time in the studio with Grande, and frequently accompanies her for big events.

Not only that, but according to a piece written about Middlebrook on Medium, he was the tour and production manager for the singer's One Love Manchester benefit concert in 2017, worked on her "Dangerous Woman" tour, and has overseen the performances of several big-name Broadway stars.

So while he may be known to Arianators as one of Grande's best friends, Middlebrook is definitely talented in his own right. He has stuck by her side both personally and professional for several years now, and it's safe to assume he'll probably be by her side for many more years to come.