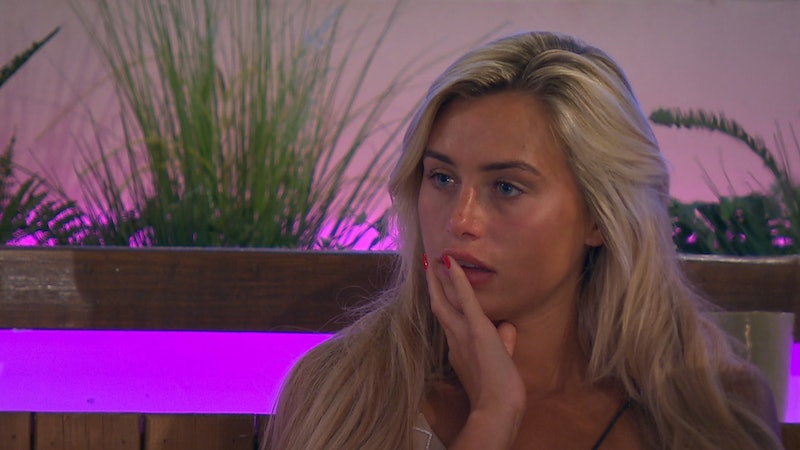 Despite the near constant drama that has consumed the Love Island villa since the boys returned from their lads tour of Casa Amor, there have been surprisingly few arguments. This all looks set to change during Friday's episode, as the villa erupts into a multitude of rows following the Islanders banging Ministry of Sound pool party and the shock dumping of four contestants. One of the contestants heavily involved is Ellie, who previously coupled up with Dr Alex, and who is now coupled up with Charlie Brake. So who is Love Island star Ellie Brown?

As Megan Barton-Hanson and Laura Anderson come to verbal blows about comments Laura made during Thursday night's show, the Friday preview also informed viewers of a forthcoming — and quite frankly, unexpected — argument between Georgia Steel and Ellie. It's the first time Ellie's found herself embroiled in any conflict with the girls, and it's sure to bring her back into the public gaze after a quiet few days on camera.

So who is Ellie? Well, Radio Times reports Ellie is a 20-year-old business development manager from Newcastle (although ChronicleLive suggests she has left that position to pursue a career in modelling in London) and self-confessed noisy eater, who joined the show alongside the now dumped Islander Zara McDermott a couple of weeks ago. After arriving in the villa, Ellie first coupled up with junior A&E doctor Alex George but their relationship came to a quick — and rather fiery — end, after Ellie admitted she just wasn't attracted to him and Alex ranted that Ellie had merely used him to secure herself a place in the villa.

If you'd forgotten that particular spat — and I wouldn't blame you because a lot of Love Island drama has gone down since then — here's a quick reminder of the pair's previous war of words.

Since her argument with Alex, Ellie has kept a relatively cool head in the villa and actually made some headway with her search for love. She is currently coupled up with self-confessed socialite, Charlie Brake, but what of her pre-Love Island life? Well, not that much is known about Ellie before she joined the show. ChronicleLive — and this has since been confirmed on screen — reports that Ellie knew the recently dumped Islander Adam Collard before joining the villa, as the pair had been snapped on nights out together. So, what else?

Well, Ellie can be found on social media, but — while her Instagram handle (@brown.elle) already has around 243,000 followers — her Instagram only dates back to June last year, so it doesn't tell followers much about Ellie's past. She also has a Twitter account but that was only created last month and won't tell you much either. Thus, what there is to know about Ellie must be deduced from her actions in the villa so far, as well as her pre-Love Island interviews.

“I haven’t got the ability to look past a situation when I’m in it," she explained. "If somebody annoys me in that moment, I get very emotional. I say things that I will probably regret saying.” Aligning that information against her argument with Georgia, viewers can be pretty certain things are going to get heated between the pair.

It's more than safe to say that a lot of Love Island viewers were equally shocked to hear the news of Ellie and Georgia's forthcoming beef. And, excited or not, viewers are pretty much in agreement that the Ellie/Georgia argument seems très random.

Here are just a few of their reactions:

So, what are Ellie and Georgia fighting about? Guess everyone will find out later.

More like this
Molly-Mae & Tommy Fury Revealed Their Baby Girl's "Really Unusual" Name
By Sophie McEvoy and Sam Ramsden
'Love Island' Has Added Yet Another Bombshell To The Villa
By Bustle UK
Every Season Of 'Love Island' Ranked Best To Worst
By Alice Broster, Frances Stewart and Sophie McEvoy
This Pre-'Love Island' Video Of Olivia & Zara Together Changes Everything
By Bustle UK
Get The Very Best Of Bustle/UK
Sign up for Bustle UK's twice-weekly newsletter, featuring the latest must-watch TV, moving personal stories, and expert advice on the hottest viral buys.