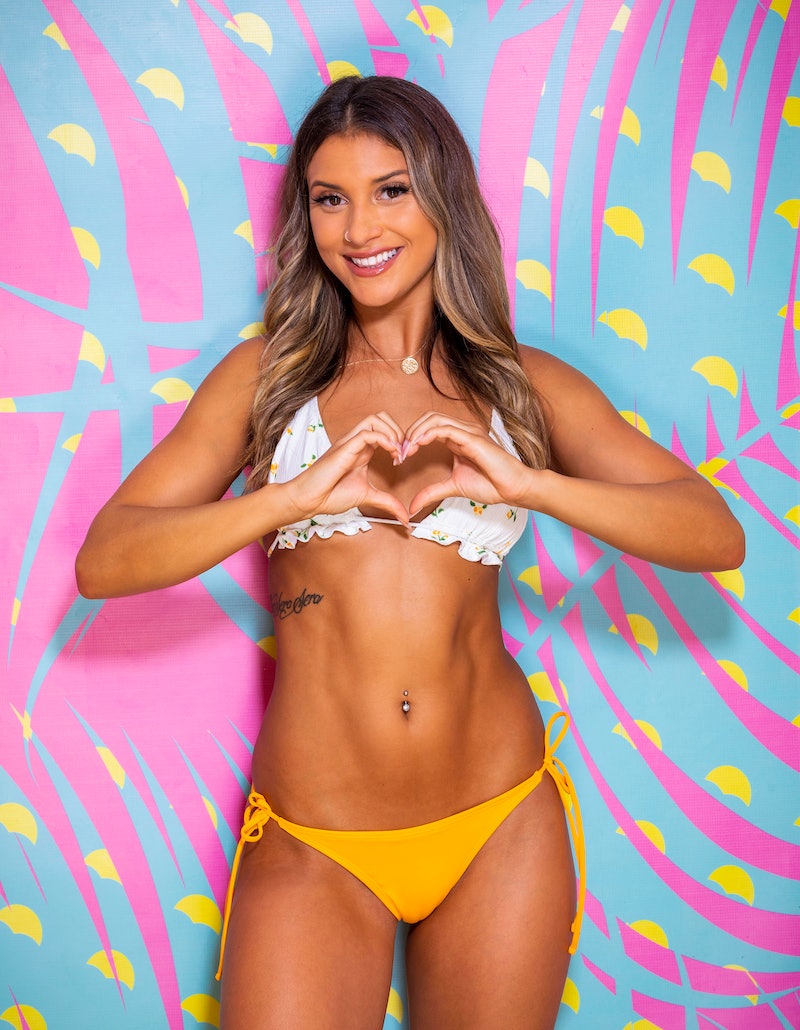 Almost a full month into villa living, many lovers have come and gone, the finale is growing nearer, and it's getting increasingly difficult to welcome newcomers with open arms. Cast members ready or not, Emily Salch joined Love Island U.S. on Monday night and she's there to shake things up. Along with her came two additional newbies: Anton Morrow and Jered Youngblood.

Of the three, original islanders seem to be most interested in Emily — she's confident, mysterious, and she seems fun. All of the girls flooded her with compliments upon meeting her, and Kyra took it a step further by admitting to finding her "hot as hell" and totally her type. She even seemed to get timid and nervous when Emily joined their group conversation.

Emily is a 21-year-old student at Binghamton University in New York where she's a member of a sorority and studies political science. When she graduates with her bachelor's degree, she wants to attend law school. In her brief introduction on the show, she said she wants to become a lawyer because she's "fiesty as hell" and "never lose[s] anything, especially arguments." She also warned the other islanders. "Boys, watch out, I'm coming for you," she said. "Girls, watch out, I'm coming for your boys." But is she?

Her Instagram page documents her life as a college student, including lots of partying. Most of her remaining grid photos (there are only 105) can be categorized into two groups: swimsuit pics and her posing with her tongue sticking out. All of those aspects of her social media explain the type of person she said she was looking for: someone who's "goofy but adventurous" and keeps life interesting.

Kyra, who automatically began crushing on Emily, was feeling down prior to her arrival because Cashel left the island. Kyra assured the other girls that nothing could happen between her and Emily, but during the next challenge, the group was tasked with a mix-up of giant beer pong and truth or dare that may have changed things. It was guys versus girls, and whenever someone's cup was targeted, they had to answer to a dare — in the pouring rain. The wet challenge shenanigans led to Emily kissing two people: Eric, whom she said was her type along with Weston, and Kyra. Oddly enough, those two — Eric and Kyra — were leaning into coupling up after Cashel's exit, but Kyra said she was too hurt to pursue anything serious. Now, it looks like Emily could potentially take that spot. She later admitted that she really enjoyed her kiss with Kyra.

In an E! News exclusive clip from the July 30 episode, the two women discuss sexuality. "I guess you could say I'm bi," Emily tells Kyra. "Do you think that you could, like, have feelings for a girl?" Kyra asks. Emily isn't sure. "I don't know, I've never, like, actually liked a girl that liked girls," she says. "I would be down to, like, trying, maybe, seeing where things go."

Between this spark and Demi Barnett's impending relationship with a girl on Season 6 of Bachelor in Paradise, reality TV is finally, slowly but surely, waking up.