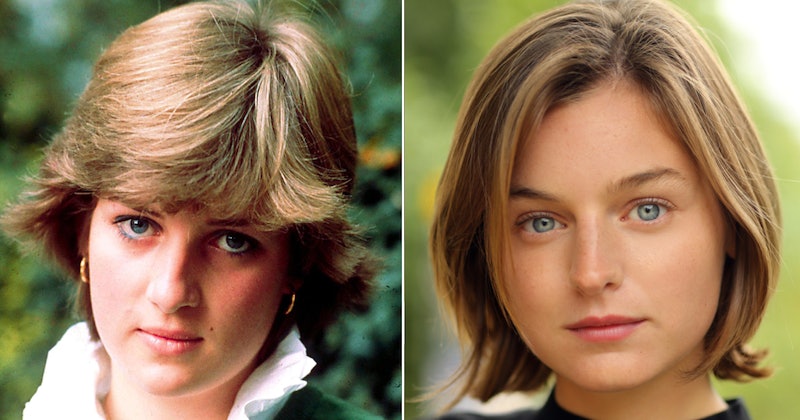 Period dramas are so good. Seeing people dressed in gorgeous old clothes and speaking with funny accents. What more is there to life really? Well there are, of course, period dramas based on history, which just add a whole new level of scandaliciousness. Especially when it comes down to noted public figures like, oh I don't know, the Queen. All the casting on ITV's biopic series about Queen Elizabeth II has been lit AF, but the most recent one is perhaps the most hotly anticipated. You guessed it: Lady Di. But who is Emma Corrin, the actress playing Diana in The Crown?

Corrin has only recently finished up at uni, graduating from Cambridge University. I know, right? Swanky. Hailing from Tunbridge Wells in Kent, Corrin is fairly early on in her career. This, however, doesn't seem to be stopping her from getting some pretty huge roles.

OK so fans of Grantchester, calm down, I recognised her too. Yes, Corrin starred in the latest season of the hit hunky vicar show. She played Esther Carter, the daughter of a religious fanatic, who finds herself unmarried and in the family way. All this and her little bro is accused of murdering her mum? That's a lot for Esther to deal with. (Don't get upset the mum was a total d bag.)

Corrin also stars in a yet-to-be-released film called Misbehaviour. It's the story of a group of women who plan on messing up the 1970 Miss World Competition in London. In what appears to be true Corrin form, she is straight in there with the big-wigs like Keeley Hawes and Keira Knightley. She really has hit the ground running in her acting career, and good on her I say.

The creator of The Crown, Peter Morgan, couldn't hide his excitement about the casting when speaking to The Hollywood Reporter:

"Emma is a brilliant talent who immediately captivated us when she came in for the part of Diana Spencer. As well as having the innocence and beauty of a young Diana, she also has, in abundance, the range and complexity to portray an extraordinary woman who went from anonymous teenager to becoming the most iconic woman of her generation."

Season three of the hit show fast approaches with its new cast line up, including Helena Bonham Carter as Princess Margaret and Olivia Colman as the Queen (swoon on both accounts). Sadly, though, it has been revealed that Diana won't be making an appearance until the fourth season.

Y'all, let's be real, Corrin does look an awful lot like a young Diana. Which helps a bit because these are some serious shoes to fill. You know, playing one of the nation's/world's most-loved figures. But it seems like Corrin knows what a big deal it is. In a statement about the role, Corrin said:

"I have been glued to the show and to think I'm now joining this incredibly talented acting family is surreal. Princess Diana was an icon and her effect on the world remains profound and inspiring. To explore her through Peter Morgan's writing is the most exceptional opportunity and I will strive to do her justice!".

Although no date has been confirmed for season three of The Crown, it is definitely going to be released later this year, The Express reports. Sadly, that means approximately another year until we see Corrin as a young Diana, but heck, looks like it will be worth the wait.