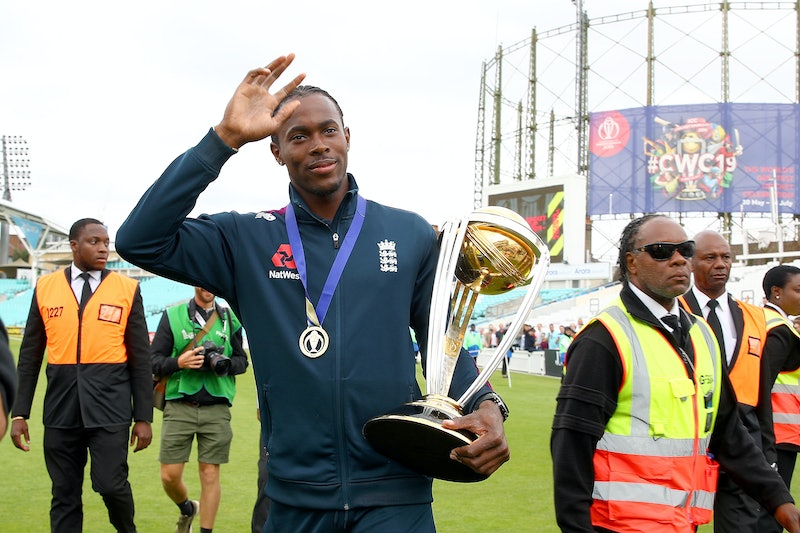 On July 14, the 2019 Cricket World Cup final aired and it’s been dubbed one of the best games of cricket ever played. It was a wild weekend of sport and one star that came out shining the brightest was Jofra Archer. The bowling sensation may have only made his international debut a few months ago but he’s the one everyone is talking about. Through his journey to the World Cup, there was a lot of discussion about his life off the pitch, but who is Jofra Archer dating? His talent, perseverance, and ambition have made him a world cup winner but is he sharing his celebrations with a significant other?

While Archer may have been relatively unknown to anyone outside of the cricket world before the 2019 World Cup, he has certainly made a name for himself in the last few months. You only have to watch interviews with him or look at his social media to see how passionate he is about the game.

It would appear that, while he loves cricket and is super close to his family (his posts about his mum are SO cute), Archer is single. At 24, he's at the top of his game and it’d seem the Barbados-born athlete has been setting his sights solely on being the best cricket player he can. And it’s certainly paid off.

According to the Guardian, eight million fans tuned in to the "deciding over" of the Cricket World Cup final on July 14 and spectators and players alike could hardly believe their eyes as the game was nail biting until the very end. ITV reported that Archer nominated himself to bowl the decisive Super Over that won the trophy. It’s reported that he said, “it's one of the only tournaments I've won in my life and from the beginning of the tournament, the guys started so well and I'd be quite disappointed if we didn't win.”

It’s almost unbelievable that Archer didn’t make his debut with England until May 2019. He’s certainly solidified his place in the team. However, it wasn’t always certain whether he would get picked. According to ITV, he was born in Barbados to a Bajan mother and an English father. Rules put in place by the England and Wales Cricket Board dictate that a player has to have been a UK resident for seven years before playing cricket for their country. However these rules changed in November 2018 and, after three years of living in the UK, Archer was eligible to be considered for the World Cup squad.

If you’re not a cricket fan then this weekend might be the first time you heard Jofra Archers name but it certainly won’t be the last. With what seems like a super tight family support unit around him, teammates by his side, and the nation's cricket fans behind him, he’s thriving. And who knows what’s in store for him in the future?

More like this
4 Surprising Celeb Throuples That Got The Internet Talking
By Sophie McEvoy
Mimi Webb’s IRL Situationship Inspired “Red Flags”
By Catharina Cheung
David Beckham’s Controversial Qatar Deal Skyrocketed His Net Worth
By Catharina Cheung
All The Ways You Can Watch The Super Bowl In The UK
By Asyia Iftikhar and Darshita Goyal
Get The Very Best Of Bustle/UK
Sign up for Bustle UK's twice-weekly newsletter, featuring the latest must-watch TV, moving personal stories, and expert advice on the hottest viral buys.