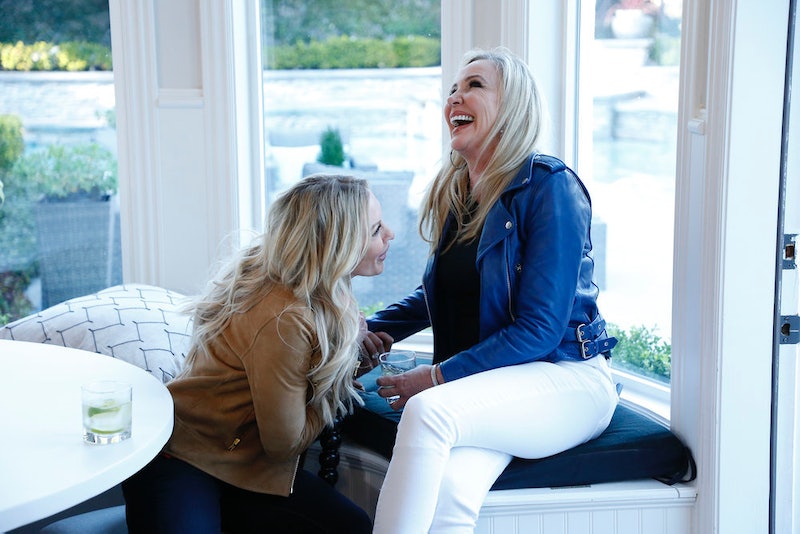 The women of Real Housewives Of Orange County have been allowed to be themselves — and let us watch — for over a decade now, and that includes seeing them fight, get married, get divorced, and work things out in the process. Shannon Beador especially has had a real time of it lately, going through a very painful, public divorce and struggling with her self esteem. But on the new season of Real Housewives Of Orange County, things are different — Shannon has a new RHOC boyfriend and she’s feeling good. Who is the guy?

Longtime viewers of Real Housewives Of Orange County will remember just how painful it was to watch Shannon’s ex-husband, David, move on so quickly after their separation. He was reportedly cheating on her to begin with, but when they officially split, David pretty much acted like his marriage never existed. Cue Shannon getting even deeper down in the dumps. Thankfully, Shannon’s turned her life around and part of that can be attributed to not only loving herself but also loving John Janssen. She’s had a rollercoaster couple of years, and it seems like now things are evening out.

Shannon recently told TooFab that meeting John was a “surprise” and they were introduced through mutual friends. “I had a connection and a comfort with him that I haven't experienced with anyone before, so I'm really grateful that he's in my life,” she said. Shannon also said that her daughters like John, which is important, given the close relationship Shannon has with her girls. “They see that I'm happy, and they want me to be happy,” she said.

According to his LinkedIn, John W. Janssen is the President of Partner at Wood Gutmann & Bogart, which is an insurance brokerage in Orange County, where he’s been for almost 20 years. He, like Shannon, went to the University Of Southern California — in fact, that’s how they first bonded when they met. John doesn’t have any obvious social media networks that he’s been tagged in, but it seems like he’s a pretty nice guy with a good job and a full head of hair.

Most importantly, he seems to really like Shannon and they are beaming in every single Instagram picture, which is always nice to see. Shannon deserves some happiness after the rough years she's had.

It seems like John is fitting in well with the rest of the RHOC crew, too, as he recently went out on a triple date night with Shannon; Tamra Judge and her husband, Eddie; and friends Kelly and Johnny Louch. Shannon’s divorce and spiral were really hard to watch, so it’s great to see Shannon happy and confident again. “I’ve never been happier. I’m in a really great place,” Shannon told Us Weekly. “My friends have known [John] for 30 years, so I didn’t have to make sure he was there for the right reasons.. I’m very much in love.”

Cheers to the happy couple, and let’s hope they’re living it up for many more years to come.

More like this
RHOP’s Robyn Dixon Explained Why Juan Paid For Another Woman's Hotel Room
By Brad Witter
'RHOP' Stars Robyn & Juan Reportedly Got Remarried & Filmed The Ceremony
By Brad Witter
Erika Jayne's Estranged Husband Tom Girardi Has Been Indicted On Fraud Charges
By Jake Viswanath
Everything To Know About A Potential 'RHODubai' Season 2
By Kadin Burnett and Brad Witter
Get Even More From Bustle — Sign Up For The Newsletter
From hair trends to relationship advice, our daily newsletter has everything you need to sound like a person who’s on TikTok, even if you aren’t.