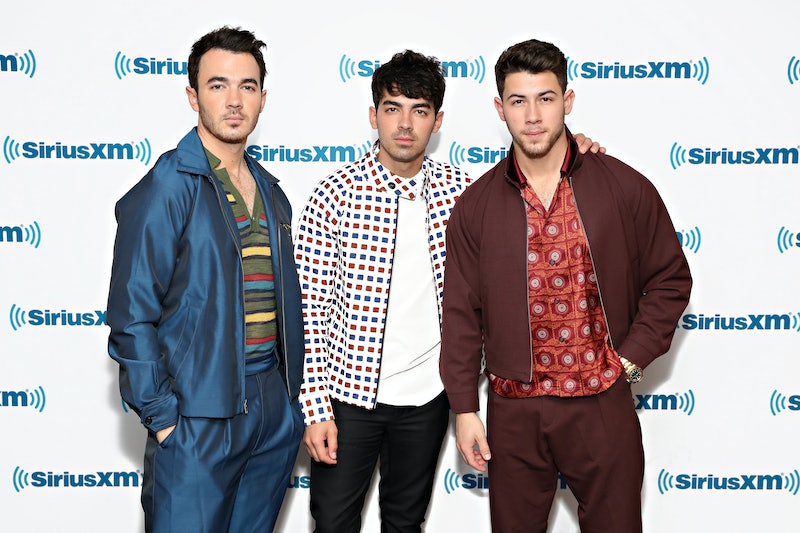 Between “I Believe” and “Hesitate,” the Jonas Brothers’ new album Happiness Begins is filled to the brim with love ballads for their respective wives. Following the Friday, June 7 release, Jonas Brothers fans have been hard at work decoding the song verses. It’s already been well established that “I Believe” alludes to Nick’s romance with Priyanka Chopra, and “Hesitate” serves as Joe’s love letter to Sophie Turner. But who is “Love Her?” about? The song is the perfect marriage ballad.

The Jonas Brothers' “Love Her” begins with the verse...

“Drive me crazy, make me mental

No other buttons she can push

Then she’s afraid she's said too much”

... before diving into the chorus,

"'Cause when you love her

No matter the fight you know she's always right

And they say love can hurt

But seein' her smile can get you every time

“Love Her” certainly sounds like a ballad for partners that have been together for quite some time. But perhaps the most compelling piece of evidence comes in the form of social media teasers leading up to Happiness Begins' release. On Tuesday, June 4, the Jonas Brothers took to Instagram to share the track list for the album prior to its Friday unveiling. In a post that credited songwriters for each track, the Jonas Brothers captioned, “Always gotta show love to the songwriters!”

Along with Grammy-nominated Mike Elizondo (who has collaborated with Dr. Dre and written tracks such as Eminem’s “The Real Slim Shady”), “Love Her” lists all three brothers — Joe, Nick, and Kevin — as songwriters. Given these subpar detective skills, it wouldn’t be far off to conclude that “Love Her” pays homage to the trio’s respective wives: Chopra, Turner, and, of course, Kevin’s wife, Danielle.

Jonas Brothers fans were quick to piece together the inspiration behind "Love Her." Twitter user @yahMON_mon8 lamented, “Hi! If the Jonas Brothers don’t do a video to ‘Love Her’ all about their wives,,,,,, they stupid!!!!!!!!!! Just looking out for them!!!!!!!!!”

Fan account @runawayswiftme wrote, “This song makes me want to find someone who will love me the way the Jonas Brothers love their wives.”

Given these fan reactions, it would be safe to assume that the song — which has been paralleled to the trio's 2007 track “Lovebug” — drew inspiration from the Jonas Brothers’ respective marriages. In December 2018, Nick and Chopra tied the knot in a series of beautifully intimate ceremonies in the Quantico actor’s home country of India. Meanwhile, Joe and Turner wed in a surprise Las Vegas ceremony in May following the Jonas Brothers’ performance at the Billboard Music Awards. As for older brother Kevin, the musician wed longtime partner Danielle in 2009 in a low key ceremony; the couple share two daughters, Valentina, 2, and Alena, 5, together.

It's a safe bet that “Love Her” will definitely be played at every Jonas Brothers fan’s wedding for years to come.