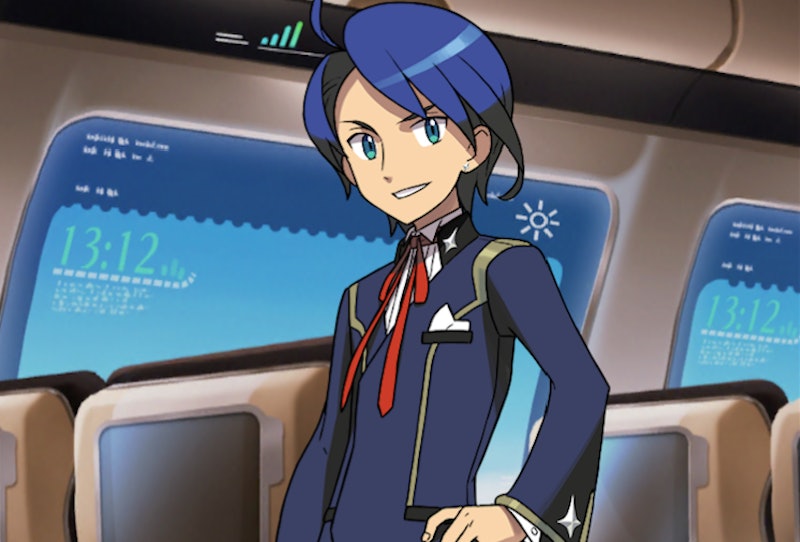 Just when I thought I was finally over the age of animated crushes, here comes Luca, the Well-Dressed Boy from "Pokemon Duel," to turn my world upside down. If you're new to the game and have not yet heard tell of Luca, he's the avatar in the app who serves as your mentor of sorts, and guides you through the tutorial on how to battle on "Pokemon Duel." And yes, the strategy game is about as complicated as anything labeled "strategy game" can expect to be, but with Luca on our side, I get a feeling we're all gonna be okay. (Insert unprofessional winky face here.)

Luca's absurd cuteness and obvious flirtation aside (WE WERE MEANT TO BE TOGETHER, I CAN FEEL IT), he is actually an original character to Pokemon lore. While the television show did have a female character named Luka and a male character named Lucas, Luca the Well-Dressed Boy is truly one of a kind. Bustle has reached out to The Pokemon Company for further intel regarding Luca's origins, but in the meantime, I think we can all agree that he is a precious sweet summer bae we need to protect at all costs. Those eyes! That smile! The swish-swoosh of his blue hair!

Luca's purpose in the app is to explain the game, which is a far cry from last summer's "Pokemon Go" — in fact, the only real similarity is that they involve Pokemon. This app was released by The Pokemon Company in-house rather than through Niantic, and Pokemon battles are done using your team of Pokemon figures (called a "Duel Set" in the app) to try to get to your opponent's side of the board, using strategy to navigate your pieces and battle their pieces along the way. Once you've advanced in the game, you can customize your pieces' battle abilities, so you can be up to snuff when you go toe-to-toe with your friends.

The app is available in iOS and Android as of January 24. And speaking of available — Luca, you can call me anytime.