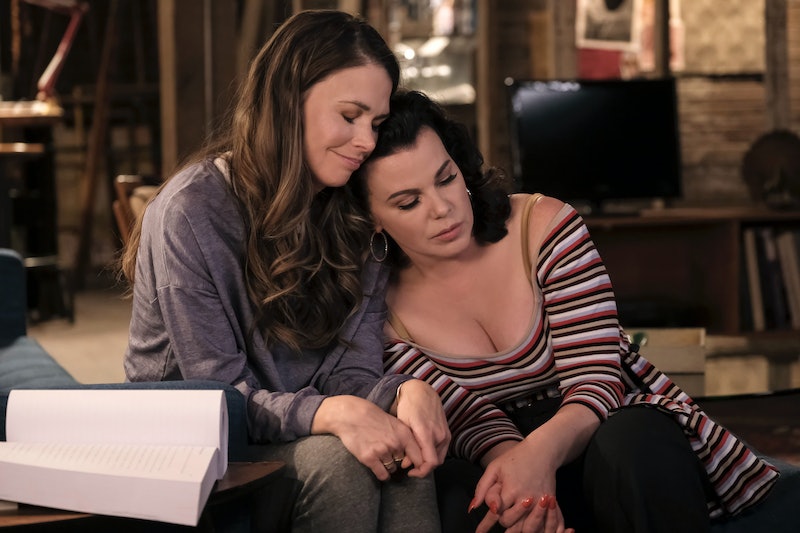 As the main character of Younger, Liza Miller gets all the good relationship bits. That’s fine, I guess (#TeamCharles), but what about the rest of the show’s ensemble? Like Maggie, for example. Maggie deserves more screentime always , and it’s wonderful that Younger is finally giving Maggie a chance to do her thing. It's been a while since she had a dedicated love interest on the series, but you still might recognize who Maggie is dating on Younger these days. A blast from the past is coming back to jump-start Maggie’s rock-and-roll heart once again.

Remember Malkie, the Orthodox Jewish lesbian that Maggie dated back in Season 3? Well, when everyone comes over for dinner so Lauren can have her crew meet her new girlfriend... it turns out to be Malkie. Wow, is Brooklyn small or what? Malkie and Maggie split up in Season 3 because Maggie wasn’t ready to welcome Malkie and her group of friends into her life, and she walked, giving away probably what was the best relationship fans have seen her in. Heck, it was the only real relationship Maggie’s had over the course of the show. She has some issues with commitment.

And Malkie tells her this at dinner, saying, “You’re a middle-aged woman who’s scared to let anyone in. You love the chase, but you never want to get real.” “It’s what you do best,” she adds, just to drive the point home. But after some soul-searching, Maggie visits Malkie’s boutique, the two exchange some nice words, and everything seems really hopeful and nice. Maggie is turning over a new leaf, telling Malkie, “I’m ready to do the work.” Did you just swoon? Because I just swooned.

Wait, you’re going to swoon again — Malkie doesn’t think Maggie is serious about getting back together, so Maggie gets Malkie’s face painted on an ugly brick wall near her shop. Swooning! Kissing! It’s all so beautiful. And a much needed break from the ongoing Charles and Liza "will they-won't they" love story. I mean, now that those two are giving things a shot, viewers are going to need a little distraction.

Maggie has spent her time on Younger in various stages of hookup, but the stories are focused so much on Liza and Kelsey’s relative love triangles that Maggie hasn’t got her due — until now. Maggie prides herself on being independent and self-sufficient, which are great traits a person can have, don’t get me wrong. But no man or woman is an island, and sometimes, you just want someone to eat dinner with and tell you you look pretty when you’re having an “I’m gross” day.

Maggie is realizing that she’ll never have those things unless she breaks down her walls. Maybe her painting of that big ugly wall for Malkie is a literal and metaphorical step in that direction. As she says, she’s ready to do the work. Part of this work, though, is going to be what drove Maggie away in the first place — Malkie’s extended circle of friends and family in Brooklyn. Malkie has a community, and that community comes with her. It’s not going to be easy for Maggie, especially because she’s used to being alone all these years, but it will certainly be worth it in the end. Which is something this show never fails to remind us.