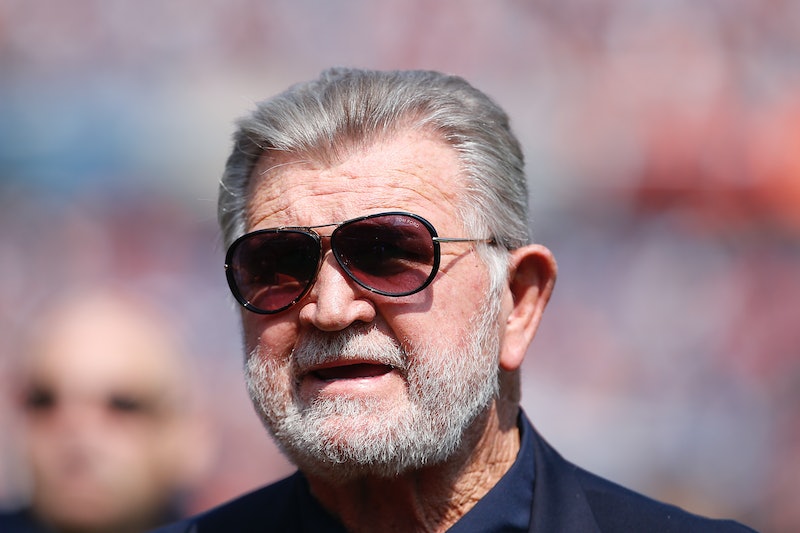 Former Chicago Bears coach and player Mike Ditka said there's been "no oppression" in more than a century during a radio interview on Monday, the Chicago Tribune reported. Ditka has been an adamant critic of NFL players who choose to take a knee during the national anthem to protest police brutality in the United States. In this latest interview, Ditka accuses the players of falsely painting themselves as victims of nonexistent oppression.

“All of a sudden, it’s become a big deal now, about oppression,” Ditka told Jim Gray on Westwood One’s pregame show. “There has been no oppression in the last 100 years that I know of. Now maybe I’m not watching it as carefully as other people.”

The key words here are "that I know of." There has clearly been evidence of oppression in the past 100 years, it just seems as if Ditka was able to put it out of his mind. The Tribune points out that when Ditka played for the Bears in the mid-1960s, his fellow teammates Brian Piccolo and Gale Sayers became the team's first interracial roommates.

Someone else noted on Twitter that Ditka, born in 1939, was 23 years old during the March on Washington in 1963, during which Martin Luther King Jr., along with hundreds of thousands of other activists marched for the civil and economic rights of African Americans. The Civil Rights Act wasn’t even passed until 1964, the year after the Bears won the NFL championship, the Sun Times points out, and the Voting Rights Act was passed in 1965.

Not to mention, the KKK has had a resurgence since Donald Trump's election, with one Klan member telling The Independent that the group has been growing in size. The hate group has held public marches, including one in Charlottesville, Virginia, that injured more than 19 people and resulted in one woman's death.

Earlier in the interview with Westwood One, Ditka was asked about Muhammad Ali and Jesse Owens taking a stand for social justice. Both athletes were vocal about civil rights. “I don’t know what social injustices [there] have been," the former coach replied. "Muhammad Ali rose to the top. Jesse Owens is one of the classiest individuals that ever lived. Is everything based on color? I don’t see it that way. You have to be color blind in this country. You have to look at a person for what he is and what he stands for and how he produces — not by the color of his skin. That has never had anything to do with anything."

Ditka's comments are a prime example of how a lot of white people have turned a blind eye to racial discrimination in America simply because it doesn't effect them. They don't want to discuss white privilege so that they can continue to benefit from it. The fact that Ditka can ignore decades of systemic oppression against people of color shows how blinding white privilege can be.

One of the main reasons white supremacy has been able to thrive in this country is because of white complacency, and a common refusal to speak out when witnessing injustice. Our own president was unable to publicly condemn white supremacists. According to feminist and activist Peggy McIntosh, most white people are not aware of white privilege and therefore are unable to see how it affects them or those around them.

"Describing white privilege makes one newly accountable," she writes. "As we in Women’s Studies work to reveal male privilege and ask men to give up some of their power, so one who writes about white privilege must ask, 'Having described it, what will I do to lessen or end it?'"

The entire reason people like Colin Kaepernick, who began taking a knee during the anthem last year, engage in civil disobedience in the first place is to get the attention of those who turn a blind eye to oppression. It's to send a message to people like Ditka and Trump that oppression is alive and well and we need to do something about it.