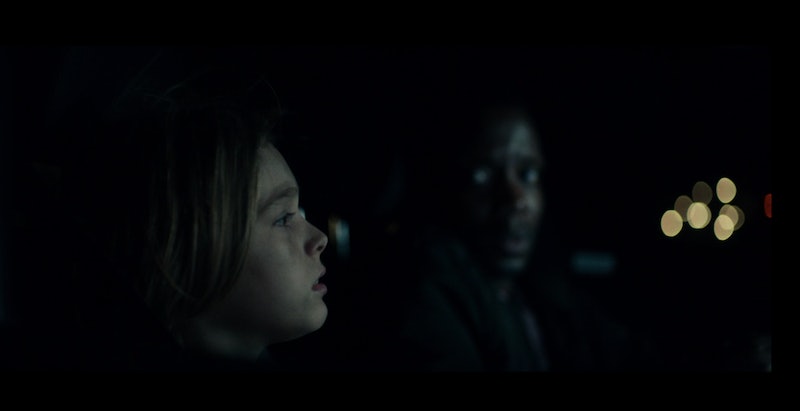 Normally when people see an enticing movie trailer, the general reaction is disappointment that they have to wait a couple months to see the actual film. Well, during Sunday night's Super Bowl, Netflix and producer J.J. Abrams changed things up completely by releasing a trailer for The Cloverfield Paradox — followed by the news that the movie would be available to stream immediately following the big game's ending. For once, eager fans wouldn't have to wait more than a few hours to see a highly-anticipated film. But one thing audiences couldn't avoid, though, even with this new model, was still having plenty of questions about the actual movie. For one thing, who is Molly?! The Cloverfield Paradox introduces this new character with little explanation, and her role seems very, very mysterious.

Played by Clover Nee (fitting name, eh?), Molly is a young girl who a doctor named Michael (Roger Davies) finds standing in the rubble of his destroyed hospital after unfathomable attacks. She wails for help, and he rescues her, driving her away to safety. In the car, she explains that her uncle has died, probably in the hospital's destruction, and Michael promises her that they're going to track down her parents. In the meantime, Michael gets the OK from a friend via text to use his shelter, and when the duo arrive there, Michael uses his medical skills to tend to Molly's injured arm. He also eventually manages to make contact with Molly's parents, and hears that they're grateful their daughter is alive and well. Later, Michael learns through a phone call that his wife, Cloverfield Space Station worker Ava (Gugu Mbatha-Raw), is returning to Earth, while Molly watches on curiously.

And that's basically the extent of what's known about the young character. It's totally possible that Molly doesn't have any significant purpose in the movie other than giving Michael someone to take care of while he's desperately looking for answers about his wife, who's suffering on the Cloverfield Station and without communication to Earth. After all, Michael does give a moving speech to Ava via phone message about trying to be there for others and save as many people as possible even when disaster is striking all around them. Molly might simply be a girl in the wrong place at the wrong time, an innocent rescued by Michael and brought to shelter before hopefully eventually reuniting with her family.

But this is Cloverfield we're talking about, a franchise in which very few things appear without reason or a deeper purpose. It's entirely possible that Molly might be a bigger character than we realize, someone whose role will be fully explained in the fourth Cloverfield movie (whenever that arrives) — especially because of how similar the shelter she and Michael use in Cloverfield Paradox is to Howard's home in 10 Cloverfield Lane. Could Molly and the shelter be the connection between the two movies and the series overall?!

It's unknown just yet, and don't expect to find answers anytime soon. One thing's for sure about these movies — if Molly does have a bigger role to play in the overall franchise, fans won't find out until the next Cloverfield film rolls around. These movies are shrouded in such secrecy that barely any plot details get released before the films themselves, let alone spoilers about who characters are or how they factor into the general story. It's true that Molly might be just a totally normal girl with awfully bad luck, but it's also true that she could easily be someone else entirely and have a major part to play in any upcoming Cloverfield films. Only time will tell...