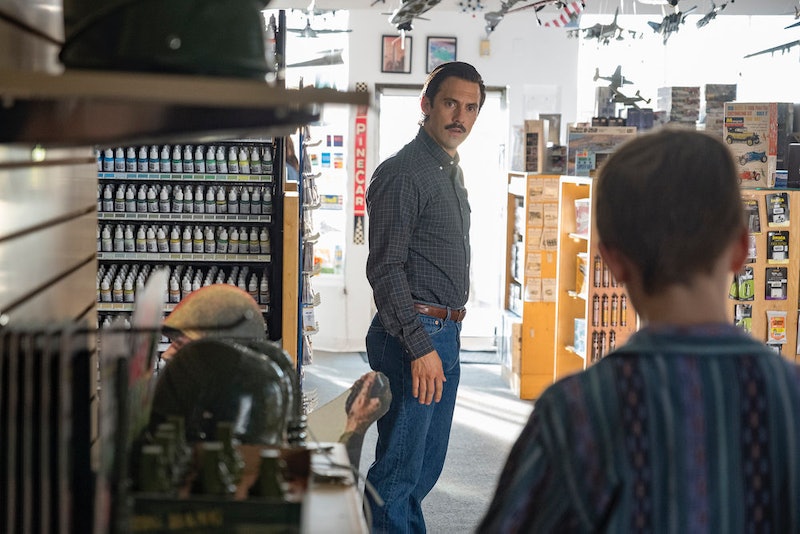 The pilot of This Is Us unveiled a mystery, and the program hasn’t slowed down since. Viewers know about Jack, his undying love for his family, and his tragic death, and now, in Season 3, the show is starting to fill in the gaps of what happened to him before he met Rebecca. One of those huge moments was his service in the Vietnam War — a mysterious time viewers know little about, but may finally be explained thanks to This Is Us' Mr. Robinson, a new character introduced just briefly in Episode 3.

In the Season 1 finale of This Is Us, Jack is back from Vietnam, and he tells everyone he was just a “mechanic” and didn’t see any fighting — probably so no one would ask him about his experiences. But, as we all soon learned, Jack’s time in Vietnam culminated in one huge tragedy — the loss of his younger brother, Nicky. Jack doesn’t talk about his time in the war, and frankly, it seems like no one really asks him about it. When Kevin demands Jack buy him war toys, he refuses, and then calmly explains that he went to war, and it was bad, and he can’t deal with tanks and guns because they remind him too much of the past. This is about all an 11-year-old can handle when it comes to talking about post-traumatic stress disorder, and it’s probably all Jack can manage, too.

Flashing forward to the present day, Kevin realizes that, even though he just starred in a war movie, he knows nothing about his father’s time in Vietnam (thanks a lot, Terry Gross) and sets out to track down some information. The first step is emailing Mr. Robinson, a man who, according to a box of stuff that Rebecca gave Kevin, may have served alongside Jack. In the email, Kevin explains that he really has no choice but to contact him because he thinks that Mr. Robinson can shed some light on what happened overseas.

This is a huge ask because, just as Jack didn’t really want to talk about the war, Mr. Robinson may not want to either. That seems to be a common reaction to such emotionally charged experiences, as many Twitter users reported their family members felt the same way in regard to their Vietnam memories — most were too painful to share.

Hopefully, Mr. Robinson can tell Kevin more about Jack’s actions in Vietnam, and he may even have some insight into how Nicky died. Only one Pearson son came back to Pittsburgh from the Vietnam War, and losing Nicky changed Jack forever. Perhaps Mr. Robinson — and any other fellow vets that Kevin can find from his dad’s platoon — will be able to talk to Kevin in a way that Jack never could. Kevin may not be able to get his father or his uncle back, but he can celebrate them and recognize the sacrifices they made for America, and maybe Mr. Robinson can help.