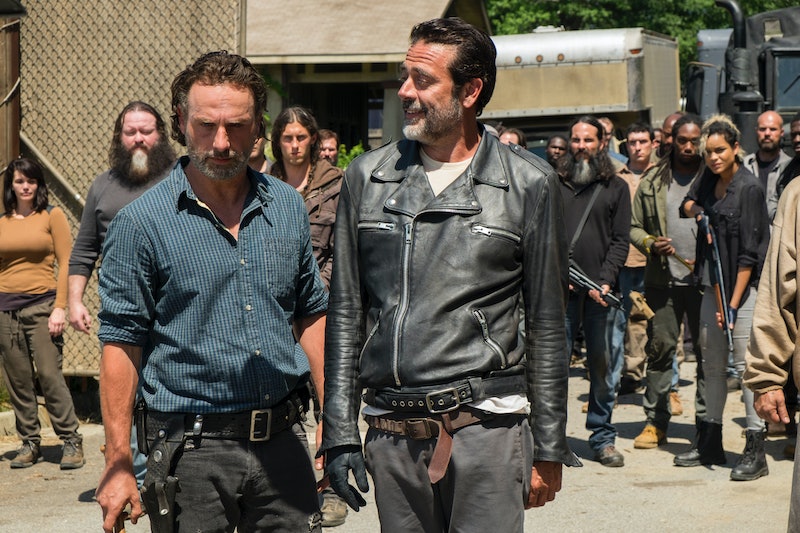 Season 7 of The Walking Dead has been introducing viewers to an absurd amount of new characters and the one group that appears to link all of the communities on The Walking Dead is the Saviors. The gang led by the evil Negan seems to be everywhere. They've been terrorizing the Hilltop, the Kingdom, Alexandria, and — based on the episode "Swear" — the newly introduced community called Oceanside. They might not be covering sea to shining sea of the zombie-filled U.S., but the Saviors have been an ever-present force on The Walking Dead since Season 6 and I don't think that will change anytime soon. So if you have been getting confused about all these new characters, I'm here to provide you with a who's who of the Saviors.

I think by now you're probably more familiar with Negan than you wish you were. And as despicable as he may be, you gotta admit he's built himself a pretty expansive empire. Because his territory is so large, you may have lost track of all of his Savior minions. Even the gang at Alexandria is learning just how massive his group is and how far their reach is after they mistakenly only attacked a satellite station outpost and not the Savior's official compound, the Sanctuary. Negan obviously needs many a right-hand man (sorry, too soon?) to help him rule, so while you don't need any explanation about who Negan is, you might want some information about his multiple main henchmen (and henchwomen!).

Here are the Savior underlings who have received the most screen time to help you understand just who Rick and the gang are up against.

Dwight has been featured a lot on The Walking Dead, so you most likely are up on ole' Ironface. He has been messing with Daryl since Season 6 and he has a weird thing for stealing Daryl's stuff. (Even the angel wings vest? What is your damage, Dwight?) The series revealed in Season 7, Episode 3, "The Cell," that after he tried escaping the Saviors in Season 6 with his wife and her sister, he was caught by Negan. To save Dwight's life, his wife agreed to marry Negan. (Ohhh, that's your damage.) He's now one of Negan's main men, but there could be hope for this Savior to come to the good side.

Sherry was Dwight's wife, but she was forced to marry Negan after they were caught escaping. In Season 6 she was out on the road with Dwight and her sister Tina (who died in that episode), but now she is stuck in the Sanctuary. While she looks better physically, she is far worse emotionally — especially since her appearance in the doctor's office during "The Cell" indicated that Negan is trying to have a child with her. She is a friendly face to Daryl at the Sanctuary where he has no one else, but her advice has been to just do what Negan says. And unfortunately, that's exactly what she's doing to stay alive and it doesn't seem like a great plan.

Simon has also been around since Season 6, but he was promoted during Season 7, Episode 5 "Go Getters." He has now taken over interactions with the Hilltop, which means he gets to harass Gregory. (Honestly, I'm cool with Gregory getting harassed.) This switch of power came about since Rick and crew killed the Saviors who used to deal with the Hilltop at the outpost and also because Negan and Simon are probably pretty suspicious that the Hilltop had something to do with that slaughter. I anticipate that Simon actor Steven Ogg will continue chewing up the scenery on The Walking Dead for a bit after also being on HBO's Westworld for a few episodes.

Only seen in Season 7, Episode 2, "The Well," so far, Gavin is the leader of the group who interacts with the Kingdom and he actually seems relatively reasonable. He appeared to be genuinely pleased with the amount of pigs the Kingdom had provided to the Saviors and even cooperated with Ezekiel when a Savior and a member of the Kingdom were fighting (more on that in a minute). Though he's still smarmy, for a Savior, he wasn't half bad in his first appearance.

On the other side of the despicable spectrum is Jared. This long-haired dude works under Gavin and is assigned to the Kingdom detail. He antagonized the Kingdom's Richard (the guy who feeds the pigs) and the two men began fighting. While Richard would have easily bested Jared, Ezekiel called Richard off, which led to Jared calling "free shots" and hitting him. Gavin did order him to stop, but Jared made sure to give Richard the finger and then oink like a pig when they were leaving. Just like his hair, Jared is gross. Let's hope he is a character who dies in Season 7.

One of the few women high up in the ranks of the Saviors is Arat. She was heard over the walkie-talkie in "The Cell" and then appeared in Season 7, Episode 4 "Service." When the Saviors descended upon Alexandria, Arat was the one who realized that the gun inventory that Olivia was in charge of was incorrect. Not much else has been revealed about Arat, but it's clear she is important when it comes to the Saviors.

Joey's lovely nickname of "Fat Joey" comes from Negan himself. During "The Cell," Negan told Dwight to let Fat Joey go out to get a runaway Savior. Instead, Joey stayed back to guard Daryl, gave him a sandwich, and then didn't lock up the cell correctly. Turns out though, this was a calculated play orchestrated by Negan to see what Daryl would do. Joey appears to be the perfect lackey for Negan since he takes Negan's bullying while being obedient.

Since it seems the Saviors aren't going anywhere, there are bound to be plenty more of them to keep track of — but the communities who are under Negan's thumb better join forces soon to put a dent in Negan's large ranks.

More like this
'Criminal Record' Is The 'Doctor Who' Reunion We’ve All Been Waiting For
By El Hunt
Emilia Clarke Shares More Details About The New 'Game Of Thrones' Series
By Maxine Harrison
“The Door Is Always Open” For Another 'Breaking Bad' Spin-Off, Says AMC Boss
By El Hunt
Regé-Jean Page Spoke Out On His Rumoured 'Bridgerton' Return
By El Hunt and Maxine Harrison
Get Even More From Bustle — Sign Up For The Newsletter