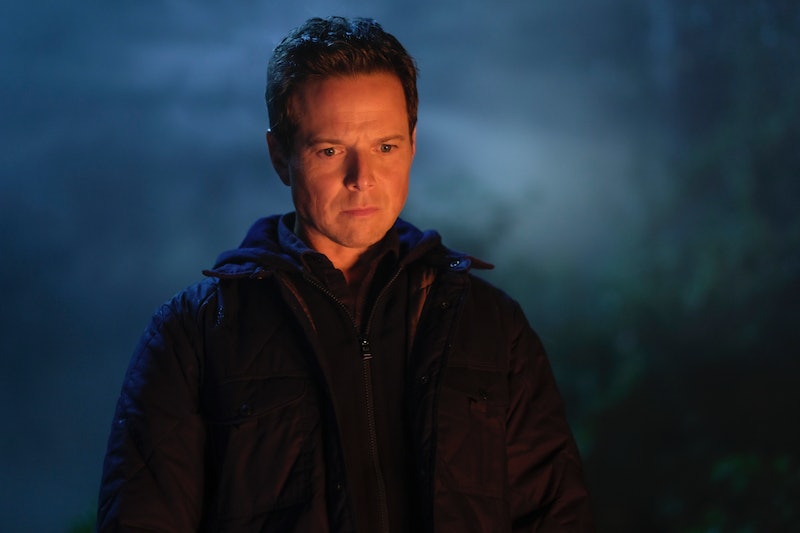 Courtesy of The CW

Spoilers ahead for Nancy Drew. It’s definitely, without a doubt, possibly true that Nancy Drew's dad, Carson Drew (Scott Wolf), did it. Did what, you may ask? It’s unclear. And to whom? Maybe Sea Queen Lucy Sable, or the recently murdered Tiffany Hudson or, dare we speculate, his client Ned Nickerson. And why did he do whatever it is he did to whomever he did it? THERE’S NO WAY TO BE SURE. But Josh Schwartz’s CW series assures us that everyone has secrets, and those of Nancy Drew’s widowed dad are spilling from his small-town attorney briefcase faster than his sleuthing daughter can jimmy a filing cabinet.

The harbor town of Horseshoe Bay is chockablock with mystery right now: Who killed Tiffany, the wife of wealthy Ryan Hudson, who has spent his summers in this coastal Maine idyll since he was a kid? Who killed Lucy Sable nearly 20 years ago, on the same night she was crowned Sea Queen? The two cases, like the police chief’s ragtag suspects, have so far been connected by little more than Nancy Drew herself.

But in the final scene of the most recent episode, Carson is seen burning a blood-soaked dress suspiciously similar to the organza confection Lucy supposedly died in two decades earlier — before Nancy and her Scooby gang were even born. It’s far from the first suspicious move he's made. In the series premiere, Carson's revealed to be having a clandestine romance with his dead wife’s best friend — Karen, a town police officer on the Tiffany Hudson case.

To be fair, everyone in Horseshoe Bay is a total liar. George, Nancy’s boss at the diner, is sleeping with Tiffany's husband Ryan. Nancy’s boyfriend Nick served time on a manslaughter charge for which the key witness was — wait for it — Tiffany Hudson. The same Tiffany Hudson from whom Nancy’s coworker Bess, who claims to live in a mansion but in reality lives in a van, stole a mega-carat diamond.

It’s not Carson Drew’s lying that makes him standout in his haunted hometown. It’s that he’s so good at it. When Nancy catches her father and Karen mid-tryst, Carson tells his daughter he was afraid to hurt her with the truth of the romance so soon after her mother's death. The Concerned Dad bit is plausible, but as the series progresses, he’s emerging as the kind of guy who has an answer for everything, who can deftly bat away probing questions with the composure of, well, a trial lawyer.

When Nancy asks him about an old memory — she recalls seeing her parents digging an antique trunk from their backyard in the middle of the night — Carson explains they were just trying to recover great-grandma Rosalind’s old silver. And when she asks him about that bloody tulle dress in the attic? “I didn’t know it was still up there,” he tells her. “That was a prop I used to scare your mom with years ago. I got it at a thrift store, threw some food dye on it, and we had some laughs. And I guess we must have left it up there.”

That Carson is lying — why bother destroying a prank dress? — is obvious. Why he’s lying his less so. Unlike with George and Ned, Nancy Drew hasn't discovered much by way of motive for her father. Which isn’t to say she believes him. “I thought I knew my dad but if he could lie about Karen,” she warns, earlier in the episode, “he could lie about anything, including what happened to Lucy Sable.”

Lucy is probably the series most un-pindownable character, appearing in flashback as a real person who fell from the bluffs but whose body was never found and also, it seems possibly, a ghost. The bloody dress in the Drew family attic coupled with the fact that Lucy was never found suggests there's more to the Case of the Missing Sea Queen than we know.

“People here in this town, they trust you,” Ryan Hudson says to Carson when he’s trying to convince the attorney to join his legal team. There are whispers that the young widower was involved in Tiffany’s death. “So you can buy me a little good will with the locals.” The suggestion is that Carson is above suspicion in Horseshoe Bay, but that’s not the same as being guiltless.

Despite assuring Nancy’s mother that he’d never work for the Hudson family again (Why not? Still unclear, like most everything else.), Carson ends up taking the case. Her needs the money. “You’re not a kid,” he tells Nancy when he shows up to bail her out of jail after she's apprehended breaking into the town morgue. “This girl detective act isn’t cute anymore.”

The show is portraying Carson, once again, as the Concerned Dad. But if he did have a hand in Lucy’s disappearance, the real concern would be living with Nancy Drew and the bloody dress in the same house. During the final burning of the dress, after Nancy is has been bailed out, we see Carson close his eyes against the flames with something that smacks of regret. Whether it’s for whatever bad thing he’s done or simply for letting Nancy get so close to the truth, the jury’s still out.