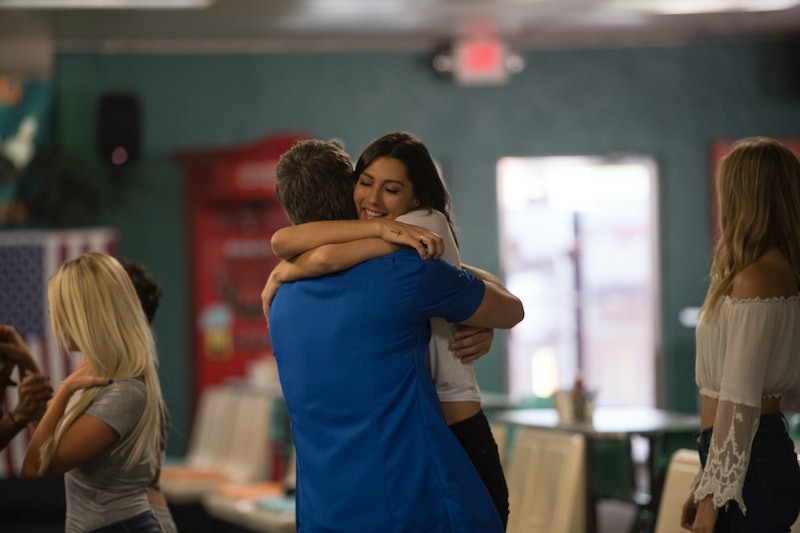 Remember how Chris Harrison said that this was going to be the most dramatic seasons of The Bachelor ever? Well, he says that about every season, but in the case of Arie's season of The Bachelor, it's pretty true. This season is pretty high up on the drama scale. From Krystal turning on all of the women to Bekah's age thing, a lot was happening. But the cherry on top of the drama sundae has to be Becca's ex returning to beg for her hand in marriage. Yep, that happened. Who is Becca's ex-boyfriend Ross on The Bachelor? (He declined to comment on his relationship with Becca when asked by Bustle.)

Becca has been open about her past relationships, so it hasn't been hard to find information on Ross aka Ross Jirgl. He and Becca dated a few years ago, according to Reality TV World — one of Becca's old Facebook photos is a pic of the two of them. According to his LinkedIn, he went to Minnesota State (which makes sense because in the aforementioned photo, he is wearing a football uniform from the school) before getting a Master's Degree at Indiana State University. Ross is currently a Sport Performance Coach at Stanford — a position he's held for about a year now.

Ross and Becca were together for seven years, and he got her through her father's death. That's actually why, as Becca told Arie on one of their one-on-one dates, the relationship lasted a lot longer than it should have. She said:

Relationships ebb and flow, and Ross and Becca's ran its course... until now. They loved each other one, but Ross is back (aided by producers, of course), and he wants to win Becca back. Now, this moment has been the tease heard 'round the world for the whole season.

It's about to get awkward, y'all! Ross is all like, "I didn't know that you get to propose at the end of this and I want my girl back." I don't know how Ross doesn't know how The Bachelor works considering this is Season 20-something, but OK. The whole point is a proposal. Ross saw Becca slipping away, and he couldn't stand back and let it happen. As Ross is talking to Arie, he says that he and Becca are soulmates and that he wants to marry her. Of course, Arie isn't necessarily down with this — Becca is in his group of final women, and he's already told her he loves her. Arie. Was. Mad. "If Becca were to leave, I would just be crushed," he said. "The whole thing makes me so angry and upset. It blows my mind."

Becca has already told Arie that she's in love with him, so unfortunately, it seems like this is too little, too late for Ross. He may love Becca, but she's moved on from this relationship, and she's looking to her future. Unless Becca is still holding a candle for Ross, he'll go home empty-handed. But, hey, ABC — are you looking for a new Bachelor for next season? Because this guy seems way more interesting than Arie (and he's very cute, too!).