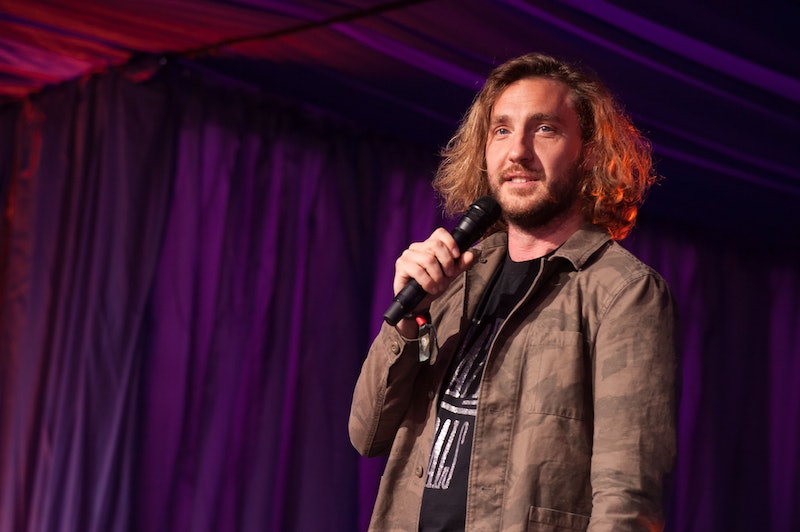 The Strictly Come Dancing 2018 lineup is almost complete, with a total of eleven stars now officially confirmed for the upcoming series. In 2017, a total of fifteen celebrities took to the dancefloor, suggesting there's only four more annoucements left to make. And the eleventh contestant to be confirmed? Comedian Seann Walsh, who you might recognise from his appearances on Live At The Apollo and 8 Out Of 10 Cats. Not ringing a bell? Let's get you caught up — who is Seann Walsh?

Walsh announced he'd be participating in Strictly on the August 17 edition of The One Show, where he was revealed as a contestant alongside BBC news presenter Kate Silverton. He's one of the UK comedy scene's most established comedians; plus, he's a TV comedy staple. Wondering why he looks familiar? As the BBC notes, he's appeared on TV shows including (deep breath) Virtually Famous, Celebrity Juice, Play To The Whistle, Bad Move, 8 Out Of 10 Cats, Live At The Apollo, Alan Carr's Chatty Man, The Jonathan Ross Show, Russell Howard's Stand Up Central, and Tonight at the London Palladium. Just a few little, under-the-radar TV appearances, then. Walsh even scored a major slot on U.S. television earlier this year, appearing on Conan in February.

He's a pretty prolific tourer, too: according to his website, he's got a staggering 55 UK tour dates lined up between September and December. What's more, they'll take him all over the country, from Durham to Southampton — not especially local to the BBC London studios, then. Here's a question: how's he going to find time to rehearse? Will his yet-to-be-announced partner accompany him on tour? Will he be forced to Skype them from his dressing room?

Perhaps, you might think, Walsh is already a skilled performer, so comfortable in his jazz shoes that he'll only require a quick half hour before the Strictly live shows to pin down that choreography? According to the man himself? Not so much. "Having seen videos of me dancing on friends’ phones from the night before, it’s safe to say I’m petrified," he said in an official statement (he's also "so excited", though). He added, "I’m really looking forward to the lifts, the Lycra and the laughs, although as Craig would probably say 'dancing is no laughing matter dahhhhling…'"

So that's four contestants left to be announced, as mentioned above — providing, of course, this series of Strictly sticks to last year's celebrity quota. Time to start breaking in those ballroom shoes, devotees — there's stiff competition for that glitter ball.