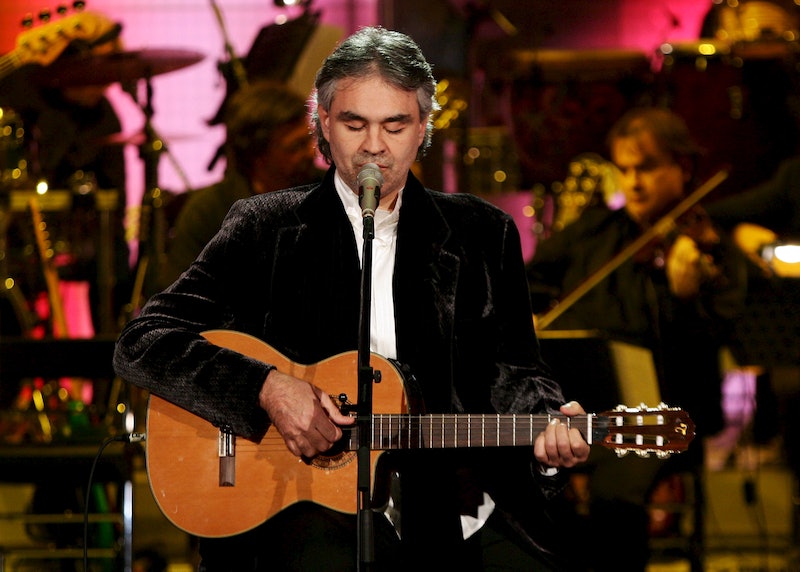 Imagine if you had a ton of money to blow on your wedding. The cake would be huge, the dress would be outrageous. But who would provide the music? 2 Chains? A$AP Rocky? Kendrick Lamar? While, unfortunately, none of those acts will be make an appearance at Princess Eugenie and Jack Brooksbank's wedding (but, I mean, who knows? Stay tuned!), the royal couple still has someone behind the mic to boast about. While I'd love to see the Queen treated to a rendition of "Humble", really, it's Andrea Bocelli who is singing at Princess Eugenie's wedding.

The walls of St. George's Chapel at Windsor Castle will be bouncing with the sound of opera star Bocelli's out of this world voice. People Magazine revealed on Oct. 8 that the blind opera singer had been chosen to perform at the ceremony, and that he will be performing two pieces. People also reported that alongside Bocelli, the 850 guests will be treated to performances from the Royal Philharmonic Orchestra during the nuptials. James Vivan, the director of music at St. George's Chapel, has also composed descants for two hymns which will be sung during the ceremony.

According to The Sun, Bocelli will be performing Ave Maria with an orchestra conducted by Carlo Bernini, before some readings take place during the ceremony. He'll then sing Panis Angelicas, one of his best known works. So, prepare to be utterly spellbound. "If God would have a singing voice, he must sound a lot like Andrea Bocelli," Celine Dion once said, as Classic FM reported. The opera's singer voice, which is admired by some of the best musicians across the globe, is set to blow any of St. George's Chapel's remaining cobwebs away.

Bocelli should be recognisable to a lot of viewers today, not just fans of classical music and opera, since he also has heaps of pop crossover appeal. He performed alongside the vocal powerhouse that is Ariana Grande back in 2015, on the song "E Più Ti Penso", which was made for the film Once Upon A Time In America. And, "of course it's good," The USA Times said after its release. But that's certainly not his strangest collab. Bocelli's even teamed up with Ed Sheeran, and on multiple occasions, too.

They first teamed up together on Sheeran's song "Perfect Symphony", and performed it together live in a spell-binding performance at Wembley Stadium, as Billboard reported on June 15, 2018. They reportedly also performed Sheeran's mega hit "Perfect" together, and Bocelli told the Evening Standard back in March that the recording the track left his sons in awe. He also revealed in the same interview that Sheeran flew all the way out to Tuscany just for the day, because he was so desperate to make the recording work.

That's the kind of demand that's placed upon one of the world's best singers. So, it makes sense that Bocelli will be making guests go gooey eyed at one of the most in demand weddings of the year.