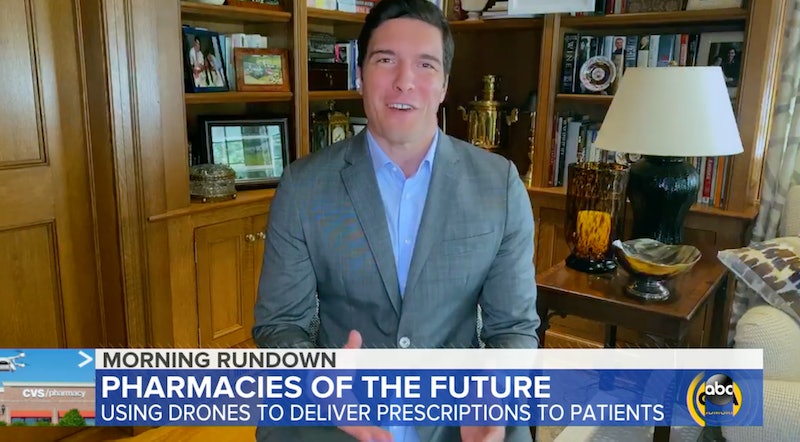 Like the passage of time, “pants” (also see: “bras”) are no longer real constructs in the age of COVID-19 quarantine. Will Reeve, Good Morning America’s pantsless reporter, could certainly attest to this. The ABC reporter went viral after he dialed into GMA on April 28 with hosts Amy Robach and Michael Strahan for the morning segment, “Pharmacies of the Future,” which touched on the use of drones to deliver prescriptions to patients during the pandemic. As he addressed the “final leg of the prescriptions' journeys,” Reeve’s literal pantsless legs were on full display, bringing to life everyone’s work-from-home nightmare.

In the beginning of the segment, Reeve’s legs were hidden by the graphics at the bottom of the screen filled with text. After a few clips in between, however, the segment returned to Reeve in a wide shot that showed much of his bottom half, revealing that he was not wearing pants. Towards the end of the segment, Robach is perceptibly taken aback, but she and Strahan remain composed as they ended the interview.

After the moment went viral, Reeve clarified that he was wearing shorts, “I promise.” Though, if he was wearing shorts, they were pretty short. He elaborated further on Twitter, writing, “Trying to be efficient I got ready for a post-GMA workout a little too soon this morning. The camera angle, along with friends, family, and several hundred strangers on social media made me rethink my morning routine.”

He continued, “Any sartorial tips from these people who are wearing a belt, trousers and shoes during their work video calls at home are most welcome. Now, back to work. Wearing pants.” So, who is the internet’s latest viral quarantine star? Reeve actually has a claim to fame that has nothing to do with forgetting to wear work pants to virtual work.

An ABC reporter who got his start as an ESPN sports correspondent, Reeve is the son of the late Christopher Reeve, the famed actor best known for his role as Superman in the ‘80s, and the late Dana Reeve, an actor who starred in Law & Order and Above Suspicion. Like his parents, Reeve acted prior to his journalism career in the movies In the Gloaming and The Brooke Ellison Story, both of which were directed by his father. Reeve also serves as a board of director for the Christopher & Dana Reeve Foundation, his parents’ foundation dedicated to spinal cord injury research. His parents became advocates for the disabled after Christopher’s horse-riding accident in 1995 left him quadriplegic.

“My parents were — and remain — my heroes and role models, so joining the Reeve Foundation board was a natural fit, considering much of my time with my parents was defined by my dad’s life with a spinal cord injury with my mom as his primary caregiver,” Will told Quest in 2019. “My involvement was never something I really thought about; it was just something that existed from the time I was a young child, and progressed organically.”

Given Reeve’s esteemed résumé as reporter, actor, and philanthropist, one thing’s for sure: no one — absolutely no one! — is immune to WFH perils in the age of ‘rona. And if there is a lesson to be learned form his experience, let it be this: you might not have to wear work pants to your zoom meeting, but you might want to wear sweats or leggings that cover your thighs — just in case.