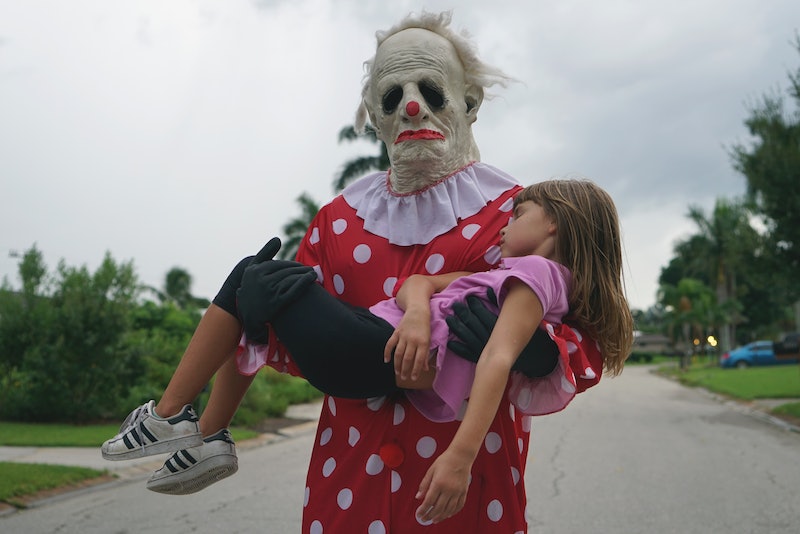 The 2016 clown craze — that disturbing moment in time where people all over the world reported creepy clown sightings — is thankfully over, but the mystery still lingers. A new documentary looks into the clown who possibly started it all. In 2014, a Naples, Florida clown named Wrinkles became an Internet sensation when a video of him crawling out from the drawer of a little girl's trundle bed spooked kids and adults alike. Later, ads with his phone number showed up all over town, and some parents did take him up on his offer to scare their misbehaving children straight. Out in theaters now, the documentary Wrinkles The Clown, by director Michael Beach Nichols, explores the identity of the man underneath the makeup and also the culture that led to his viral fame.

Scored like a horror film, Wrinkles shows all the different ways in which the public received the scary clown, through several interviews, YouTube videos, and voicemails left at Wrinkles' contact number. Callers are of all different ages; some leave messages of admiration, some of violence and hate. Viewers meet a child who loves clowning and sees Wrinkles as a role model; they also hear parents calling in and reporting their children's bad behavior, while said children wail in the background, terrified of what Wrinkles will do to them. Despite the questionable parenting on display, Wrinkles has never been accused of perpetrating violence against anyone. Still, he's an almost mythic figure.

So one of the main draws of the documentary is that the filmmakers actually speak to the clown himself. The film shows Wrinkles off duty, going through his daily routine living out of his van, and also shows his hobbies like fishing and walking through the city, as well as going to strip clubs. His face is only partially revealed and his voice is changed, so you get a general idea of the old man underneath the creepy mask.. or so you would think.

Spoilers ahead! The twist in the film is that the older man who appears in those scenes is not Wrinkles, and even the narrative of the 65-year-old retired clown as reported by The Washington Post is fiction. The video of him in the little girl's bedroom, those mysterious sightings around Naples, and many of the videos on the YouTube channel HvUSeenWrinkles were all orchestrated by a team whose ringleader still refuses to reveal his identity. Nothing spooky or supernatural there — just an understanding of the pop culture rise of coulrophobia (a.k.a. the fear of clowns) and viral culture.

The film demystifies the urban legend. Wrinkles is a character — the product of minds that think like successful YouTubers and influencers, who create and curate content for their personal brands. Wrinkles also analyzes that character's impact on society and looks into the psychology behind what makes clowns so scary in the first place.

As Bad Clowns author Benjamin Radford explains in the movie, there's something that many find inherently creepy about clowns. The jokes, the honking nose, the makeup — it's all a performance. But behind all that is the unknown. Who is the person behind the persona? Radford adds that because of typical clowning stunts and behavior, audiences can see clowns as "hyper-human" or even "inhuman," and this makes them a potential threat.

Thus, the paranoia that spread along with these sightings was inevitable. The documentary also looks into the possible real consequences of the Wrinkles character, which are the dangerous criminal clowns who followed after him. While a number of clown sightings were just pranks, some were not. In Sept. 2016, NBC reported that a teen in Ohio was chased by a knife-wielding man in a clown mask. In the same month, ABC reported that another person in a clown mask robbed a Tennessee bank while armed with explosives. In the film, the obscured mastermind behind Wrinkles says, "It was kind of scary to see where it was going because I didn't know if...Did we have anything to do with this? Before you know it, you have this creepy clown phenomenon."

Wrinkles The Clown isn't a horror movie, as it turns out. But it does look at the scary, real-world repercussions of digital content, even when that content is intended to be harmless entertainment. So while thrill-seekers shouldn't expect any real scares from the doc, they'll get a deeper look into a strange, formerly unexplained phenomenon.

More like this
On TikTok, Miles Teller Is The Latest It Boy
By Meguire Hennes
The Guide To “Witches Stairs” & Why They’re Actually Great For Small Spaces
By Emma Garza
Twitter Has *A Lot* To Say About Justin Timberlake’s Beat Ya Feet Dance
By Sam Ramsden
Fans Think Beyoncé’s “Break My Soul” Is Calling For A New Great Resignation
By Sam Ramsden
Get Even More From Bustle — Sign Up For The Newsletter