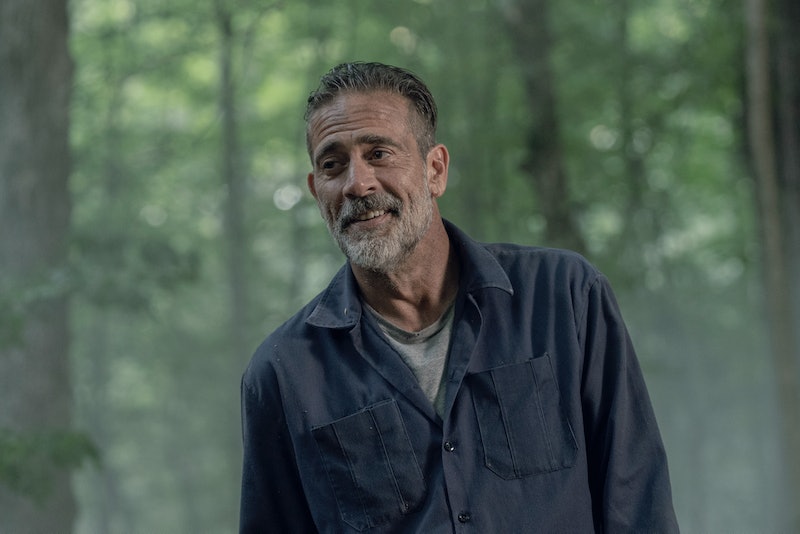 As much as Negan has tried to change his villainous ways, the sins of his past can't just be forgotten, which is why many were ready to see the former Big Bad finally meet his maker during last week's episode, "Silence the Whisperers" after he accidentally killed again. However, someone let Negan escape on The Walking Dead before any kind of justice could be served. And while it's unclear who it was that helped him bust out of his prison cell, series showrunner Angela Kang confirmed to Entertainment Weekly that the mystery person's identity will be revealed. But it isn't who you'd think it would be.

"It's not Lydia," Kang told the outlet in an interview, despite the fact that Lydia herself had confessed to the deed last Sunday, shortly after Negan's absence was discovered. But evidently that was just a ruse she used in order to lock herself up behind bars and away from those who wish to do her harm. But if Lydia didn't do it, then who did? She was certainly the one who was on the best of terms with Negan up to this point and she was grateful to him for helping to save her life. If he hadn't intervened, there's a good chance she would've been killed, so setting him free would've been an understandable way for her to return to the favor. And yet it seems Negan has another ally in his arsenal that fans have yet to learn about.

Considering who was in Alexandria at the time, the best guess would probably be Aaron, who owed Negan a debt of gratitude for helping him survive a walker attack when he was temporarily blind. That's not to say that his hatred for Negan and everything he's done has magically gone away, but the unexpected act of kindness forced Aaron to see a side to Negan he never knew existed and could have incentivized Aaron to want to pay him back. But that's all mere speculation at this point.

Ironically, though, letting Negan out was completely unnecessary since Kang also made a point of sharing with EW what Gabriel's decision would've been had he been given the chance to cast his vote regarding Negan's fate. "I think that Gabriel would have voted to not kill him," Kang added. "Ultimately he believed the fact that Lydia is saying, 'He saved me and it was an accident,' and the fact that Daryl believes her, and the fact that he knows that Negan has been trying."

However, perhaps the most important question that remains is where will Negan go now that he's a free man? According to Kang, viewers will get that answer fairly quickly, promising "We’re going to find out very soon where he has gone." Could there be a Negan and Alpha team up in the near future? Considering that he just saved her daughter's life, that alliance may be the smartest move he could make — and prove to be Alexandria's worst nightmare.