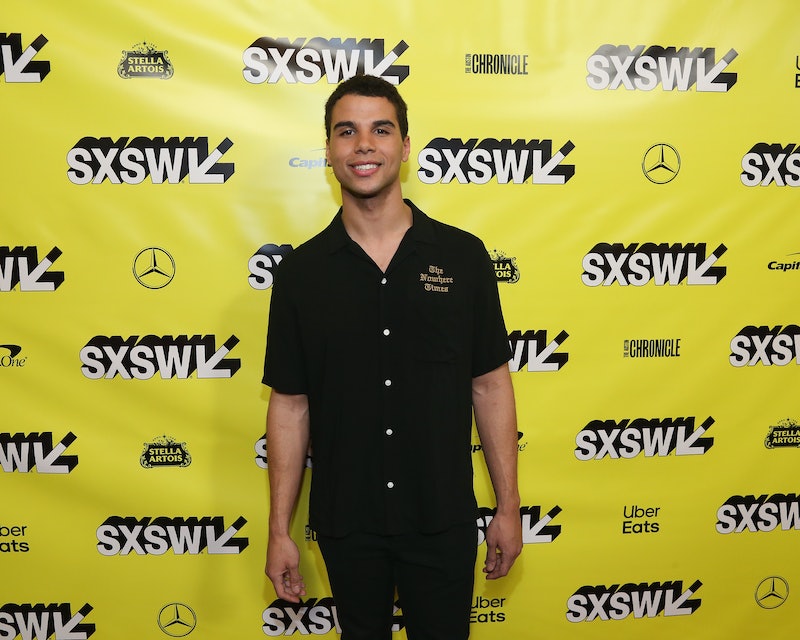 Love, Simon was revolutionary for increasing the visibility of young LGBTQ love stories on the big screen, and now it's new TV series spinoff, Love, Victor, is hoping to have the same effect on the small screen. The series stars Michael Cimino as the titular Victor, a sexually confused 16-year-old who's the new kid at Creekwood High School. But one new character named Andrew already has social media buzzing and is threatening to steal the show. So, who plays Andrew on Love, Victor?

Andrew is portrayed by a 23-year-old actor named Mason Gooding. Gooding may not be a household name, but he already has a pretty impressive résumé for someone his age. He has appeared in a number of TV series, including one-episode guest spots on Star Trek: Picard and The Good Doctor. He also had a three-episode arc on HBO's Ballers as professional surfer Parker Jones, and he's appeared in four episodes to date of the Freeform comedy Everything's Going to Be Okay, playing Luke. He also popped up alongside fellow up-and-coming actors Isabela Merced, Shameik Moore, Jacob Batalan, and Kiernan Shipka in the 2019 Netflix Christmas movie, Let It Snow.

Gooding's most notable role to date, however, was in another 2019 movie: Booksmart. If you've seen the acclaimed high school comedy — which Rotten Tomatoes ranked as the best comedy of the 2010s — then you no doubt remember Gooding's character, Nick. The high school hunk played a major role in the film, as it was his year-end party that protagonists Molly (Beanie Feldstein) and Amy (Kaitlyn Dever) tried desperately to reach over the course of the film. Nick was also the object of Molly's affections throughout the bulk of the film, making the character indispensable to the film's overall plot.

Booksmart was a pretty big hit, grossing over four times its budget at the box office and drawing tons of critical praise and even some awards season attention. But if you haven't watched Booksmart, or anything else that Gooding has been in, and you still think that the actor looks familiar, well, there may be a good explanation for that.

Gooding did not burst onto the acting scene out of nowhere, he actually has a very famous and very successful father. Cuba Gooding Jr., who has starred in films like Boyz n the Hood, As Good as It Gets, and Radio, and who won a Best Supporting Actor Oscar for his role in Jerry Maguire, is his father.

Gooding is adding to his rising profile with his scene-stealing role on Hulu's Love, Victor, and it's just the latest project for the up-and-coming actor. Odds are that you'll be seeing a lot more of Gooding in the not-too-distant future, especially if Love, Victor turns out to be a hit.

More like this
Netflix Shut Down 'Bridgerton' S3 Rumours About A “Very Dark” Storyline
By Bustle
Ashton Kutcher Wants Danny Masterson “To Be Found Innocent” In Rape Retrial
By Jake Viswanath
All The ’70s Easter Eggs You Missed In 'That ’90s Show'
By Grace Wehniainen
At 28, Debra Jo Rupp Was Living A Much Different '70s Show
By Grace Wehniainen
Get Even More From Bustle — Sign Up For The Newsletter
From hair trends to relationship advice, our daily newsletter has everything you need to sound like a person who’s on TikTok, even if you aren’t.