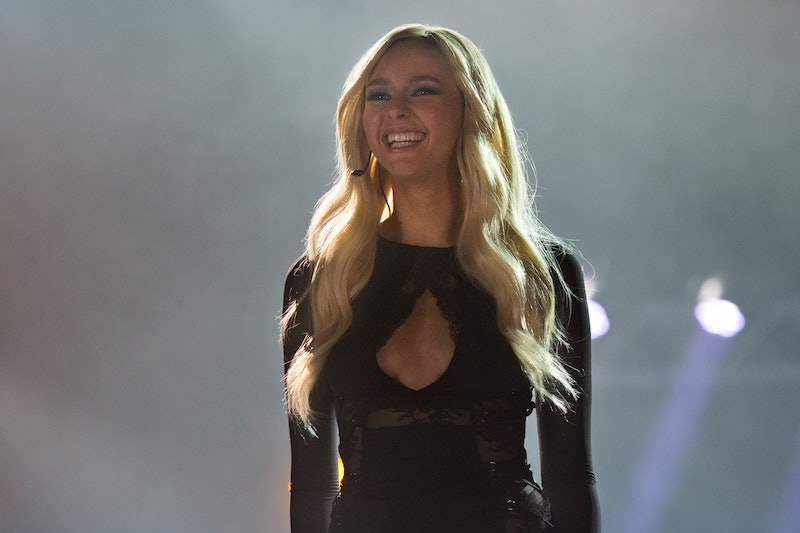 Britney Spears is a pop legend who's led an extraordinary life marked by towering highs and shattering lows. So, it's surprising that it's taken this long for Lifetime to turn that life into one of its famous TV biopics. Britney Ever After premieres Saturday, Feb. 18 on Lifetime and chronicles the former Mickey Mouse Club member's roller-coaster of a career, as well as a personal life that's been re-purposed as tabloid fodder. Perhaps it goes without saying that Spears is not playing herself in the Lifetime movie. So who plays Britney Spears in Britney Ever After? Natasha Bassett earned the role and will step into the pop princess's dancing shoes.

One of the artist's most recognizable qualities is her friendly Louisiana accent. But Bassett doesn't hail from the same "south" as Britney Spears. The actor is from New South Wales in Australia and grew up doing theater in and around Sydney. Bassett told Us Weekly that successfully mimicking Spears' speech was the first hurdle of the job. “The minute I found out I had the part, I started speaking in her accent right away," she said. "I was staying in accent for a full week before shooting, and I actually stayed in accent throughout the entire shoot. So I think some of the crew still don’t even know I’m Australian.”

Britney Spears is a role that requires a triple threat actor who's able to move and sing in a way that makes audiences forget they're not watching the real thing and sells the really tense and emotional moments of the star's eventful life. Bassett's pre-Spears résumé includes a stint on the short-lived NBC comedy Camp and roles in Australian TV and film dramas like Rake and The Last Goodbye. Most recently, she appeared in the Coen Brothers golden age of Hollywood musical comedy Hello, Caesar!, playing an ingenue with the very glamorous name of Gloria DeLamour.

In the same Us Weekly interview, Bassett said that she had some catch-up to do in order to recreate some of Spears' most famous dance routines, though she enjoyed the training. And, along with a crash course in movement, she's taking with her a new, intimate perspective on the private challenges of a very public life. “Sometimes with this movie, they would do 20 different camera angles for one emotional scene. So sometimes I was just crying for seven hours, which is not always fun," Bassett said to Us Weekly. "But now I have a tremendous amount of respect and admiration for Britney because the way she dealt with the challenges she was facing in her life, she dealt with those challenges in an amazing way."

But Bassett's most applicable qualification for the job may be her admiration of the woman she's portraying. "I listened to her music so much growing up," she told Entertainment Tonight. "I have videos of me as a tween practicing her songs in the mirror with a hairbrush in my hand." And though this biopic doesn't have the authorization or blessing of Spears and her team, Bassett told Entertainment Tonight that she hopes her idol will tune in anyway. "It's really a love letter to her and to her story, so I really hope she watches it and I just wish her all the happiness in the world."

Will Natasha Bassett's portrayal and Britney Ever After do justice to the "Toxic" singer? The real Britney Spears is irreplaceable, but imitation still is the most sincere form of flattery.