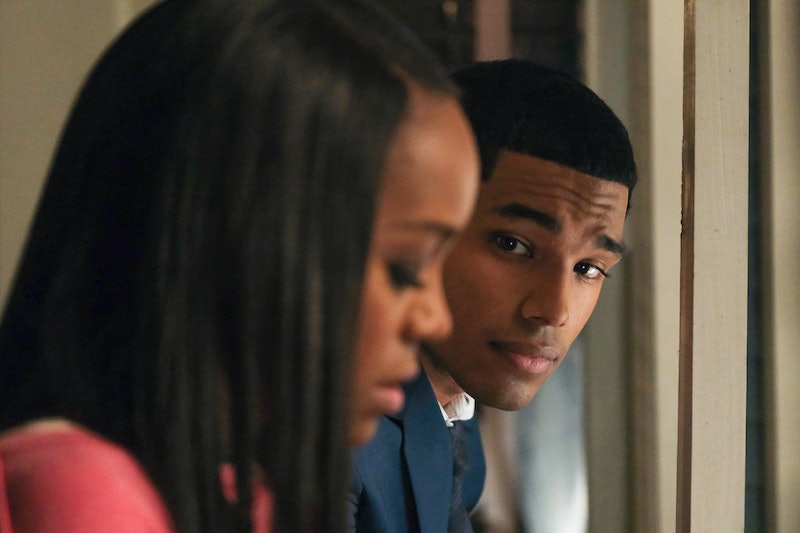 Vivian is in town on How To Get Away With Murder, and she didn’t come to play — and neither did Marsha Stephanie Blake, who plays Gabriel’s mother on the series. This actress has had one majorly busy of a year, working on projects with Hollywood’s best, brightest, and biggest names.

On HTGAWM, Blake is Vivian, Gabriel’s mom and Sam’s ex-wife. Vivian is still a mystery at this point — she could be working for the FBI, she could be on Annalise’s side, she could be in Pennsylvania just to collect her son and make things right with him. Right now, we don’t really know, but it's likely not going to end well given how much information has been revealed due to her arrival. Her visit caused Gabriel to admit to killing her ex-boyfriend Paul, who died of an overdose, and that Sam had come to visit when Gabriel was just 11-years-old. All of this information means she has a ton of motive to work against Annalise, if not murder her before the season's end.

Even Blake doesn’t quite know what Vivian’s up to — in an interview with Entertainment Weekly, Blake said that she gets “little to no information” about her character’s trajectory on the show. “I think it’s actually beautiful that I don’t actually know. As a fan of the show, I would love all versions of what that meeting with the FBI means, but it could also not mean what they think it means,” she said. “It could mean nothing. That’s how this show is; it’s kind of great.” She has enjoyed some of the more intense scenes, like when she and Annalise discuss Sam.

Blake added in the same interview, "That scene was weirdly hard to shoot in that I had personalized it so much in my own life. But it was easy because I was doing the scene with Viola [Davis], who is just such a master and I really feel like we understood essentially those two women because we’ve been there. I’m speaking for myself. I will say that I thought it was a really resonant, eye-opening moment. I hope it resonates with other women and women of color."

Before HTGAWM this year, Blake played Linda McCray on Ava DuVernay's Netflix series When They See Us, which followed the case of the Exonerated Five (formerly the Central Park Five) and the injustices they faced at the hands of the New York City court system. Of her time doing the series, Blake told Hollywood Life, “It’s one of the most impactful things I think I have ever done and will ever do.” Blake is also in the new Netflix film The Laundromat, directed by Steven Soderburgh and starring Meryl Streep, Gary Oldman, Antonio Banderas, and Sharon Stone. Her other credits include roles on shows like The Blacklist, Quantico, The Good Wife, Orange Is The New Black, and more.

So it's likely that even though the story of How To Get Away With Murder is coming to an end, Blake will likely be on your big and small screens in the very near future.