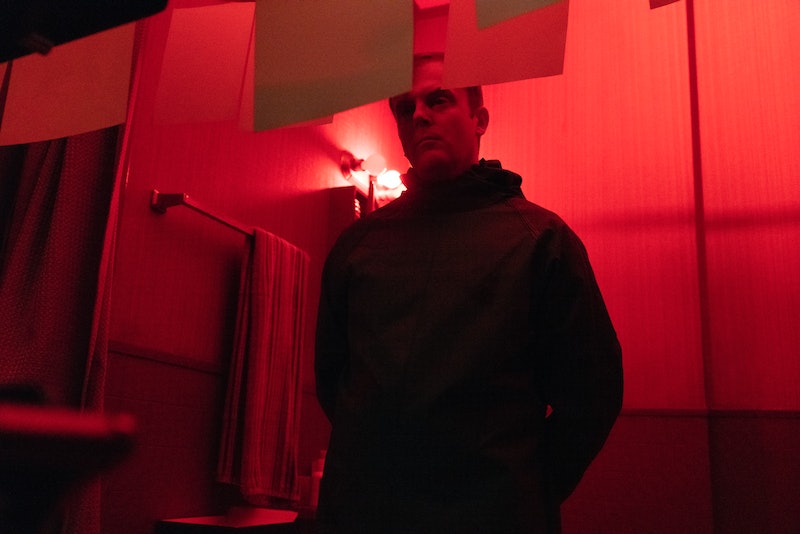 With David Tennant's Kilgrave, Janet McTeer's Alisa Jones, and even Sigourney Weaver Hand leader Alexandra, Jessica Jones has faced off with some pretty worthy adversaries. Gregory Salinger in Jessica Jones Season 3 is the main villain for the final installment of the Netflix Marvel series. And while this man doesn't appear to have any superpowers, you know he has got to be pretty bad if he's the last villain that Jessica will be facing after her time on The Defenders and in her own series. Jeremy Bobb plays Salinger on Jessica Jones when it premieres on June 14 and you've probably seen him on your TV before.

In Netflix's press materials, Salinger is described as a psychopath and he particularly resents Jessica because of her superpowered abilities. Salinger entering Jessica's life leads her to team up with her estranged best friend and sister Trish Walker, who now has a few powers of her own after getting surgery in Season 2. Showrunner Melissa Rosenberg tells Bustle in an interview that their goal with Salinger was to see Jessica take on someone without powers who is just as evil and deadly as someone with them.

"He has a great intellect and excessive knowledge of many, many, many different subjects," Rosenberg says of Salinger. "And that was a foil we had not seen her deal with yet. So we really wanted to see how she would deal with that versus how Trish would deal with it."

As the Season 3 trailer shows, Salinger has the ability to hit Jessica where she is most vulnerable by saying she's not a hero. And Bobb's delivery of this line shows how menacing he is even if he doesn't appear to be that dangerous at first glance. Bobb should also be a familiar face since has appeared in many TV shows over the years, including a number of Netflix-specific ones. He played Chief of Staff to the president in Hostages and the manager of the titular hospital in The Knick.

He was on the right side of the law (although his characters didn't always do the right thing) both as Agent Stan Cole in Manhunt: The Unabomber and as corrections officer Dennis Lambert in Escape at Dannemora. And he has played a reporter a couple of times since he was journalist Nick Henslow in House of Cards Season 2 and the unscrupulous newspaper editor A.T. Grigg in the Netflix miniseries Godless.

Most recently, Bobb was in Russian Doll. He played the smarmy professor Mike, who interacts with Natasha Lyonne's Nadia during her time looping 36th birthday party. So while the characters Bobb plays aren't quite as merciless as Salinger seems to be, they sometimes are a bit unscrupulous.

Next up for Bobb is the upcoming HBO series The Outsider based on the Steven King novel and he'll appear in the Elisabeth Moss, Tiffany Haddish, and Melissa McCarthy movie The Kitchen. So while Salinger won't last long on Jessica Jones (after all, even if he survives, the show is over after Season 3), you're bound to see the character actor Bobb keep popping up. Just hope his other roles aren't as deadly as Gregory Salinger.

More like this
Nicola Coughlan Shared A Lady Whistledown Excerpt From ‘Bridgerton’ Season 3
By Grace Wehniainen, Alyssa Lapid and Sam Ramsden
Netflix Reveals First Look At Wednesday In The 'Addams Family' Spinoff Series
By Bustle Editors
A New 'And Just Like That' Table Read Pic Confirms A Key Character's Return
By Jack Irvin and Grace Wehniainen
Viserys’ Fate On 'House Of The Dragon' Could Differ From The Book In This Surprising Way
By Grace Wehniainen
Get Even More From Bustle — Sign Up For The Newsletter