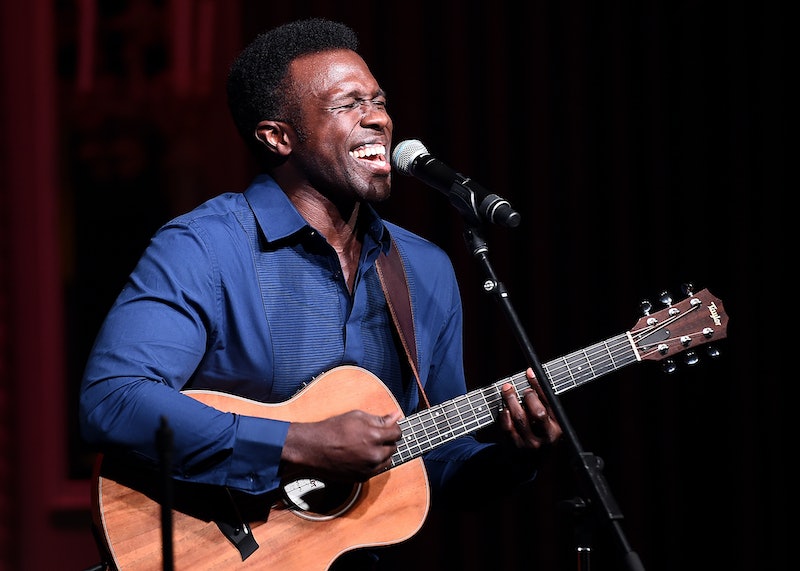 Everyone in See seems to be talking about Jerlalmeral, but it's a while before audiences get the chance to lay eyes on him. When Joshua Henry, who plays Jerlalmeral in See, finally shows up, it's clear why Jerlalmeral is so lauded amongst the other characters — in a world where humanity has been without a sense of sight for centuries, he's the only person in the world who can see — that anyone knows of.

Joshua Henry hasn't appeared in many movies or television series prior to his appearance in See, but has become a fixture on Broadway over the past decade. Henry has originated roles in The Scottsboro Boys, and Shuffle Along, and was nominated for Tony's for his performances in Violent, The Scottsboro Boys and Carousel. He even made headlines in the past month for snatching a phone out of an audience member's hand mid-performance while acting in The Wrong Man.

Despite having only brief appearances throughout See, Henry's character Jerlalmeral is responsible for nearly everything that happens in the show. Jerlalmeral's relationship with Maghra leads to her giving birth to two children that inherit his sense of vision, and make Maghra's community, the Alkenny, the subject of a very literal witch hunt. Jerlalmeral's former relationship with Queen Kane — who refers to him as a God multiple times — leads to her funneling her kingdom's resources into hunting him down, even threatening to kill her best tax collector and witch hunter for failing to find him.

Then there's the box of books that Jerlalmeral gives to Baba Voss, the man tasked with raising his twins. The box of books and other learning materials from the previous world gives them the knowledge to make tools, the relearn modern medicine, and a great deal of tension and conflict amongst the Alkenny.

While the hunt for Jerlalmeral kicks off the conflict between Queen Kane and the Alkenny, as well as the twin-inspired strife within the Alkenny, what See holds for Jerlalmeral is unclear after his first scene. Following his meeting with Baba Voss at the beginning of Episode 2, Jerlalmeral disappears once again and over a dozen years pass by before the end of that episode — meaning that his children are young adults and are still dreaming about one day meeting their father.

While only time — specifically the amount of time it takes for new episodes of See to air on Apple TV+, which drops weekly after its initial 3-episode premiere — will reveal what becomes of Jerlalmeral, it's likely that the show isn't done with him yet.