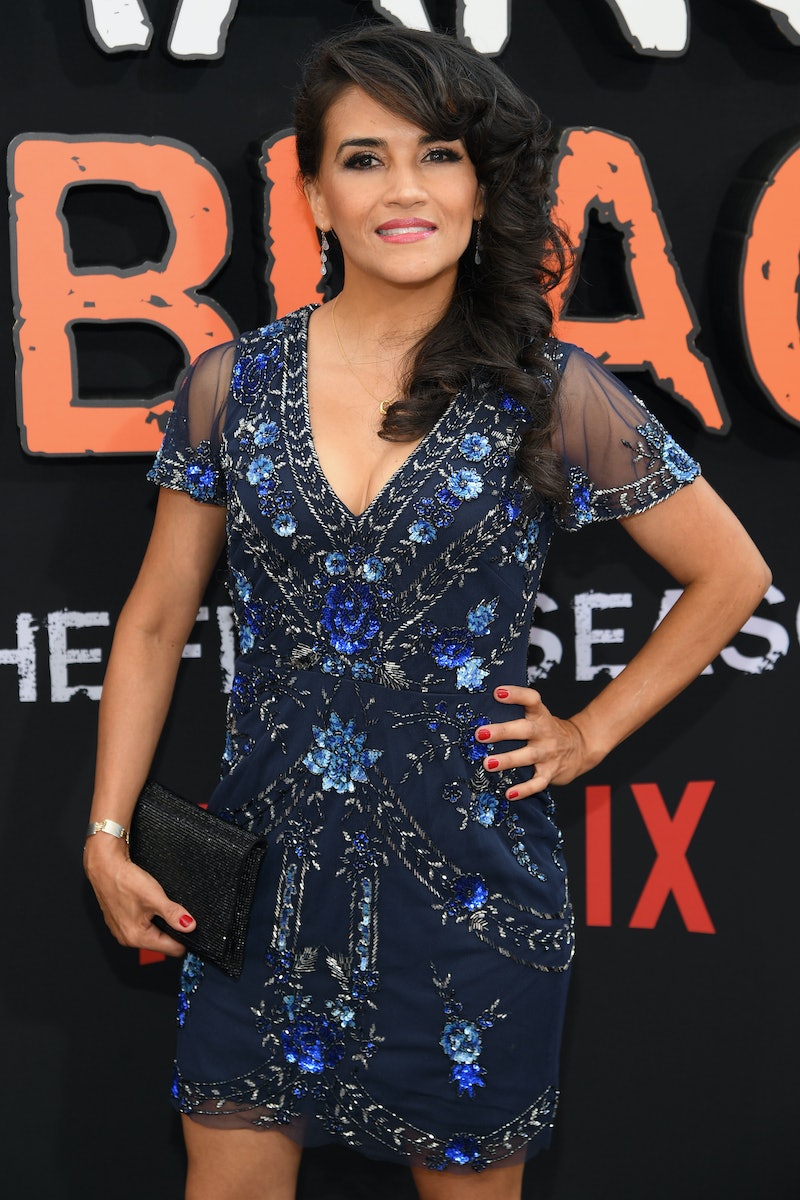 Spoilers ahead for Orange Is the New Black Season 7. It could've been risky to introduce a new character so far into a legacy show like Orange Is The New Black, but Karla only needs 13 episodes to relay her crucial and painfully relevant story. The ICE detainee from El Salvador is played by Karina Arroyave, a veteran actress best known for her role as Jamey Farrell in 24. But rather than working in counter-terrorism like Farrell, her OITNB character struggles to cope with the inhumane conditions of a Litchfield immigrant detention center and defend her right to live in the U.S. with her two sons.

The show's sixth season closed with a heartbreaking realization: immediately following her early release from prison, Blanca Flores (Lauren Gomez) was detained and dragged of to an ICE detention center. When Season 7 picks up, she's housed in a warehouse-type building crammed with bunks and dehumanizing, unsympathetic guards, awaiting a trial that could lead to her deportation at any moment. When that hearing comes, Karla's precedes hers, and Blanca watches from the bench as she recites her rights and demands more time to seek effective counseling. Inspired and awe-struck, Blanca decides to stand before the judge and do the same.

Karla is a widowed mother who's separated from her two young boys, and without funds for a lawyer, is determined to do the best she can to represent herself. Blanca seeks allyship with her and is at first met with resistance, but Karla eventually agrees to help. She sits at the detention center's desktop computers and pores over as much immigration case law as she can, using resources she learned about while working at a law firm. She'll do anything to get back to her kids, who land in foster care because of her detention. But in the end, her tireless efforts aren't enough. She's deported to El Salvador, and in her last scene, is stranded in the desert with a broken ankle while trying to cross back over the border and reunite with her sons.

Crime shows seem to be Arroyave's niche, as she's appeared on Law & Order SVU, Criminal Minds, and Blue Bloods. She's also starred in the films One Eight Seven, Dangerous Minds, and Lean on Me. Her acting career spans 30 years and is peppered with dozens of guest star roles, TV movies, and theatre appearances. According to Stella Adler Studio of Acting, she's also a playwright and screenwriter. When asked what it was like to work with Arroyave, OITNB co-star Gomez told Bustle she had no problem diving into such heavy, emotional material.

Karla's story represents the harsh realities many immigrants are facing in the U.S. right now, particularly when it comes to family separation — an issue that has become increasingly contentious under the Trump administration. As an immigrant herself, Arroyave, who is from Colombia, is a staunch advocate for immigrant rights and is vocal in her opposition to the United States' current policies, which have led to the rapid detention of thousands of people in recent years (according to CNN, 2018 saw the largest number of detainees since 2001). Arroyave has also taken firm stances on the abortion bans and other hot button social issues, which likely only further impassioned her OITNB role.

When she's not speaking out about her allyship on social media, Arroyave loves to dance and practice floral design. She often shares videos of her free-spirited dance sessions and pictures of beautiful flower arrangements. She even created a video tutorial on how to properly arrange a dried bouquet. She currently resides in New York and loves a good skyline pic for the 'gram. Hopefully in her next role, we'll get to see a bit of this lighter side, too.