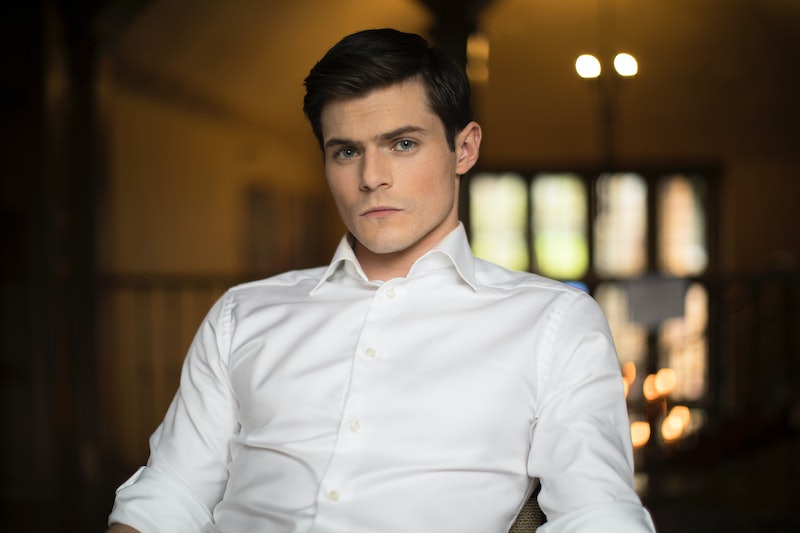 Pretty Little Liars: The Perfectionists is bringing plenty of familiar faces to the table, but there are also some new ones who you'll need to familiarize yourself with. So who plays Nolan Hotchkiss on The Perfectionists? He's someone you might recognize from another dark mystery series. The actor in question is Chris Mason, and he's no stranger to stories plagued with trauma and secrets.

He played Leo Humphries on Season 3 of Broadchurch, the British drama starring David Tennant and Olivia Colman. He also co-starred with Perfectionists star Sasha Pieterse in The Honor List, and she told Entertainment Tonight that she might have swayed things in his favor when he was gunning for the part. “I emailed our casting director and I was like, 'You have to hire him immediately,' and he was the last character we cast and we just had a ball,” she said.

The Perfectionists is Mason's first recurring role since his stint on Broadchurch concluded, and it could be a doozy. According to the Oregonian, Mason's character could be a major point of conflict on the show. Nolan Hotchkiss is the son of Claire Hotchkiss, whose wealthy family is a huge supporter of the university in The Perfectionists' new town of Beacon Heights. That sounds innocent enough, right? Not so much.

Per the Oregonian: "Nolan is a real piece of work ... who seems to take pleasure in cynically manipulating his supposed friends." That's enough to worry anyone, but hey — it wouldn't be a Pretty Little Liars spin-off if there weren't frenemies stabbing each other in the back at every turn. Mason has shared a few behind-the-scenes shots from The Perfectionists on his Instagram, but other than that, there's really not much we know about his character, or how his role will proceed once the show debuts.

Nolan is also a character in the Perfectionists novel, so fans of the books might know a little more about where his path leads. But it's unclear how closely the show will follow that — as we know, the TV adaptations of books definitely can exercise a bit of creative license.

In fact, show creator Marlene King said there are definitely ways viewers can expect The Perfectionists to diverge from the book. "I don’t want it to be a spoiler for people who haven’t read the books yet, but the books have a twist in them that would be kind of impossible to pull off on a TV show," she told Entertainment Tonight. "So I think it was great inspiration for the show, but we kind of go off [book] a little bit sooner rather than later — unlike with PLL, which I think we were really true to the first four books."

King also assured everyone that new fans are just as welcome in The Perfectionists' universe as longtime PLL enthusiasts are. You don’t have to have watched Pretty Little Liars to enjoy The Perfectionists, but you'll find a lot of Easter eggs in the new show if you do," she continued. "Just prepare for a fun new ride.

So, if you want to know more about the mysterious Nolan Hotchkiss, you'll just have to tune in to the latest chapter in this addictive franchise's story. No matter who you are, it feels like you'll have reason to be intrigued.