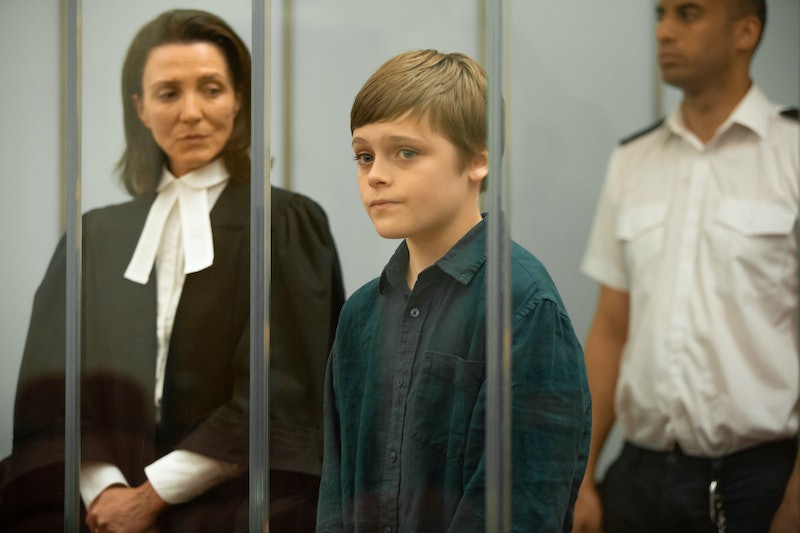 The shocking tale of a young child on trial for murder is told in BBC Two's one-off drama, Responsible Child. The series is directed by the award-winning documentary filmmaker Nick Holt and centres around 12-year-old Ray, who must face the legal system as an adult after stabbing his mother's partner. But who plays the boy on trial in Responsible Trial?

As the Radio Times reports, the character of Ray is portrayed by child actor Billy Barratt, who will be familiar to fans of Blinded By The Light and The White Princess. He is also starring as Young Scrooge in the upcoming (and highly anticipated) BBC adaptation of A Christmas Carol. According to the British Film Institute, Barratt also previously starred in ITV's Mr. Selfridge as Ralph, and in the 2018 Disney sequel, Mary Poppins Returns. The young actor's latest role arrives in BBC Two's factual drama Responsible Trial, in which he portrays 12-year-old Ray — who along with his older brother, is arrested after stabbing his mother's partner. Despite his tender age, Ray must stand trial in an adult court, and viewers will be given a peek inside this often overlooked aspect of the UK legal system.

As Deadline reports, the drama is based on a true story, and will be told within two different time frames, including the events which occurred prior to the murder, and the courtroom drama which subsequently unfolded.

In addition to Barratt, the cast of Responsible Child also includes Killing Eve's Owen McDonnell, Noughts and Crosses star Shaun Dingwall, Vera's Debbie Honeywood, Les Misérables actor Angela Wynter, and more. Elsewhere, the controller of BBC Drama, Piers Wenger, has stated the plot of Responsible Child "raises one of the most complex and challenging questions of our time," and promised the drama will explore "the age of criminal responsibility in England."

So, it sounds as if viewers have yet another brilliant BBC drama to look ahead to, and you can catch Responsible Child on Monday, December 16, at 9 p.m. on BBC Two.

More like this
This First Look At 'The Gold' Shows Jack Lowden In A Whole New Light
By El Hunt and Sam Ramsden
A New Netflix Doc Will Explore The Unsolved Murder Of Jill Dando
By Sam Ramsden
'The Last Of Us' Has Officially Been Renewed For Season 2
By Darshita Goyal
'Abbott Elementary' Fans Probably Missed This 'Parent Trap' Easter Egg
By Sam Ramsden
Get The Very Best Of Bustle/UK
Sign up for Bustle UK's twice-weekly newsletter, featuring the latest must-watch TV, moving personal stories, and expert advice on the hottest viral buys.