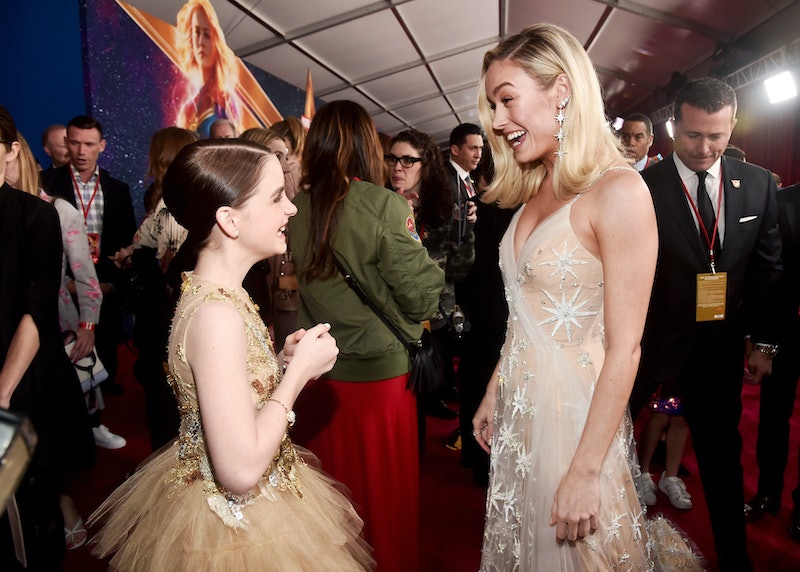 Captain Marvel arrives in theaters across the country on Mar. 8, and it's bound to send shockwaves across the universe. Carol Danvers/Captain Marvel (Brie Larson) crosses galaxies to defeat the shape-shifting alien race, the Skrulls, in the epic onscreen origin story. As much as it might inspire you to try to shoot light beams out of your hands and learn how to fly a plane, Captain Marvel will also probably move you emotionally. The movie includes flashbacks to younger versions of the superhero that are bound to pull on your heartstrings. There are two actors who play young Carol in Captain Marvel: London Fuller who plays six year-old Carol, and Mckenna Grace, who's 13 year-old Carol.

Carol's past plays such a big part in the '90s-set film because when you first catch up with her, Captain Marvel had forgotten her whole life as Carol Danvers. After turning into a superhero with alien DNA due to a Kree-Skrull battle, Captain Marvel has been living among the Kree aliens for years. When she begins questioning her powers, she embarks on a journey to recover her past, which, of course, Fuller and Grace play a big part of.

While you might not recognize Fuller from her previous roles, which include a couple of appearances on Modern Family, Grace will probably be a little more familiar. The 12 year-old actor has already created a name for herself after starring in several high-profile movies and shows.

After getting her start playing a little girl named Faith Newman on The Young and the Restless for a year, Grace's acting career has skyrocketed like Captain Marvel blazing through the sky. The young actor played Young Emma on Once Upon a Time for two years before playing a young Tonya Harding in I, Tonya in 2017. That same year, Grace starred in Gifted, in which she played a young prodigy named Mary who was being raised by her uncle, Frank, played by Chris Evans.

While walking on the red carpet at the Captain Marvel premiere, Grace told Marvel interviewers that she didn't remember talking to Evans about what it was like for him to play a Captain America for so many years, but that it was definitely on her mind. "I'm just a really big fan ... So whenever I did get to work with him it was just like, whoa," she said.

And it sounds like Grace had an equally thrilling experience working on Captain Marvel, where she technically joins the superhero squad. And she has a lot of admiration for her character, Carol. "I think that she's always had this strength inside of her and it just bursts out and she's just this super awesome powerful superhero," she said.

On the same red carpet, Fuller, the even younger Carol, talked about what she's gained from the movie. "It feels to me like I’m not the only girl who has strong powers. Every girl around the world has strong powers," Fuller said.

The different stages of Carol's life portrayed in Captain Marvel are part of an inspiring through-line that connects the superhero's past as a brave, determined young girl to her present as a mega-powerful woman. And all three actors who play her are a part of that.