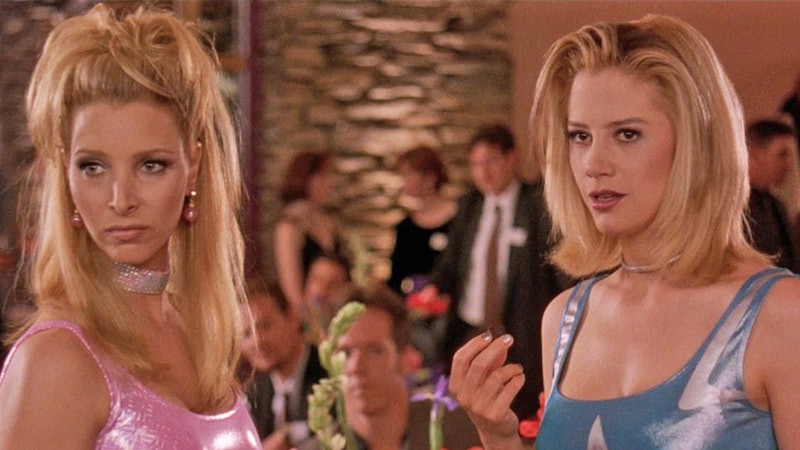 Prepare to feel extremely old right now. Romy & Michele's High School Reunion came out 20 years ago, on April 25, 1997. If possible, the movie is even more relevant today, as '90s kids will be braving their own high school reunions in the very near future. Despite coming out so long ago, Romy & Michele's High School Reunion remains one of the best '90s buddy movies ever made. It stars Lisa Kudrow and Mira Sorvino, as 28-year-old besties who feel they haven't achieved much since high school (is anyone else relating super hard right now?). The pair decides to lie and tell everyone at the reunion that they invented the Post-It note, in what's turned out to be a very memorable movie moment.

In the film, Romy and Michele decide to lie about inventing the Post-It note, and believe no-one will know the true story behind the product's invention. However, the pair fall out when Romy claims she wants to tell everyone that Post-Its were her idea, and that Michele just decided to make them yellow. While it all worked out fine in the end, and the besties managed to reconcile their differences, shouldn't we be asking who really invented the Post-It note? And aren't they, like, pretty annoyed that Romy and Michele stole their thunder?

The company behind the original Post-It note, 3M, claims that two of their employees, Arthur Fry and Spencer Silver, invented the product. Fry was looking for a bookmark that wouldn't fall out of place, and Silver's job at 3M was to develop adhesives. Together, the pair came up with what is now known as the Post-It note, by combining their ideas. Developed in the early '70s, the product was eventually rolled out in 1979, when it became a huge success.

However, lawsuits have been brought against the company, claiming that the idea was based on a product called "Press-on Memos". Whatever the truth of the matter, it's clear that Post-It notes weren't invented by Romy and Michele, much to our collective dismay.

In a completely cute interview with HuffPost Live in Oct. 2015, Sorvino even got to chat with co-creator Fry about Post-It notes, and the impact of Romy & Michele's High School Reunion on his life. While the actor had to concede that she had nothing to do with the product's creation, '90s kids everywhere will agree that Romy and Michele remain role models for life.