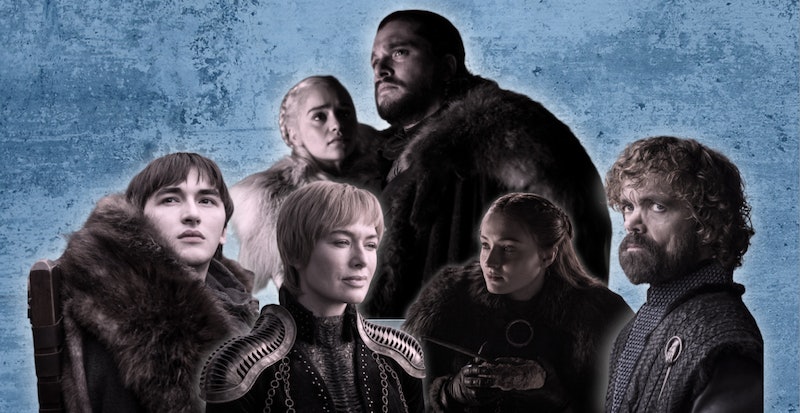 Winter is coming. If you know anything about Game of Thrones, you know those three words have been so important to the series since the first episode that they've been memed, plastered on ads, and even become the name of a prominent fan site in the eight years since the HBO show became a worldwide phenomenon. But despite this ominous refrain being uttered by wholesome heroes like Ned Stark and Jon Snow for dozens of episodes, the noble houses of Westeros have been far more interested in battling each other for a seat on the Iron Throne in scheming displays of political manipulation than in preparing for The Great War.

It's no wonder, then, that we know next to nothing about the plan for ruling Westeros should the living defeat the Night King and his army. Game of Thrones cannot be teasing us with an epic battle between humans, dragons, and once-dead zombies only for a Lord or Lady to take up the Iron Throne and dial the clock back to scheming dynastic politics. So, what would democracy actually look like in a post-White Walker Game of Thrones?

From the beginning of the show, Daenerys Targaryen, the only known surviving member of the Targaryen family, and Jon Snow, the supposed Stark bastard, were positioned as heroes. And heroes they have been: Daenerys brought dragons to life when they were considered long dead, helped end slavery in Slaver’s Bay, and built a whole army with fleets from nothing on the sheer strength of her conviction that she was the true heir to the Iron Throne.

Jon Snow, on the other hand, has had humble beginnings. Raised as Ned Stark’s bastard, he joined the Night’s Watch to become its youngest commander. He fought the Wildlings, before bravely recognizing their true common enemy — the marching dead — and bringing them through the Wall for safety. That act led to his death at the hands of his own men, though he was reanimated by Melisandre — a sign that he may be destined for greater things. Alive once again, he's been relentless in educating the people of Westeros about the Night King. Now that he’s learned he’s not really a bastard, but Rhaegar Targaryen’s son Aegon and the true heir to the Iron Throne, he could be the hero who will defeat the White Walkers. But if he does, what happens when the dust settles?

Game of Thrones cannot be teasing us with an epic battle between humans, dragons, and once-dead zombies only for a Lord or Lady to take up the Iron Throne and dial the clock back to scheming dynastic politics.

Even without the looming threat of death, the noble houses in Game of Thrones have an unhealthy obsession with power that disregards the well-being of the common people. Cersei Lannister, the incumbent Queen and Protector of the Realm, is infamous for using fear to rule. So was Aerys Targaryen, the Mad King who was defeated when he threatened to burn his enemies. In Season 5, Daenerys famously proclaimed that she wanted to break the wheel that pits the noble houses against each other; that she would be the one to to revamp the governance in Westeros. But if Seasons 7 and 8 are any indication, Daenerys is showing signs of becoming the power hungry ruler her father once was.

For someone wanting to break the wheel, Daenerys has notoriously avoided going into details of how she'll do it. She was insistent that Jon Snow bend the knee for any help in fighting the White Walkers. When Tyrion tried to bring up the conversation of governance and how she plans to choose her heir, she shut him down. Despite claiming she is nothing like her father, Daenerys had Randall and Dickon Tarly burnt by her dragons for refusing to bend the knee against the advice of her Hand, effectively destroying the Tarly house. In the Season 8 premiere, Daenerys walked into Winterfell with the full power of her two surviving dragons, using fear to cultivate loyalty rather than effective leadership. She butted heads with Sansa, who is more preoccupied with providing for her people and allies and actually understands what it takes to rule. And now, with her unhappiness upon learning Jon’s true lineage, how long will it be before Daenerys snaps into doing something drastic?

Game of Thrones has subtly called out monarchist politics by giving us rulers who, if not outright dangerous, quickly proved themselves to be incapable of ruling. The show has hinted that achieving lasting peace in Westeros lies in an egalitarian, democratic setup. So if Daenerys Targaryen isn't the person for the job, who is? Each season, Jon Snow has made it pretty clear that he is not built for ruling; that he desires nothing more than to be left in peace. The one to lead a democratic Westeros shouldn't be someone reluctant to do so, but rather someone who has only worked for the people, and cares more for political stability than power — someone like the political mastermind and skilled man of whispers, Varys.

Varys, a eunuch from Lys, rose to become a master political manipulator from virtually nothing. From the beginning of the show, Varys revealed himself to be one of the few men with conscience, whose actions were always inspired to protect the realm. He was instrumental in making sure Daenerys lived, foiling Robert Baratheon’s plot to have her killed. He believed Daenerys’ rule could bring true peace and prosperity to the realm, but promised her in Season 7 that if she were to fail, he would be the first to speak truth to her power.

If Westeros becomes a democracy, it’s important for the privilege of noble houses to crack, the endless chain of power transference to end, and for governance to be devised by an able cabinet that is elected with people’s participation. Varys has the experience, the acumen, and the background to sympathize with the poor and oppressed. While we’re at it, we could have Sansa be the Foreign Minister, Arya the National Security Advisor, Tyrion head the Department of Education and Welfare, and Gendry head the Department of Labor. Or perhaps the government could be a democracy under a constitutional monarchy, like today’s Great Britain, with Sansa taking over the throne as wise, regal counsel to Varys’ parliamentarian.

Though Game of Thrones has fashioned itself as a Middle Earthian saga of power and magic, it would be satisfying for the show to end on a note that points to modernity and equality. The show has been criticized in the past for its toxic patriarchy and an almost obsessive depiction of nudity, so for the show to turn around, break the wheel of privilege, and have an able, asexual, empathetic commoner leading the government would be a true, befitting climax.

More like this
Viserys’ Fate On 'House Of The Dragon' Could Differ From The Book In This Surprising Way
By Grace Wehniainen
You’ll Definitely Recognise Both Of Ty Tennant’s Parents
By Maxine Harrison
'House Of The Dragon’s Theo Nate Is A “Massive” 'GoT' Fan
By Maxine Harrison
'The Lord of the Rings: The Rings of Power' Revisits Iconic Spots From 'The Hobbit'
By Darshita Goyal
Get Even More From Bustle — Sign Up For The Newsletter