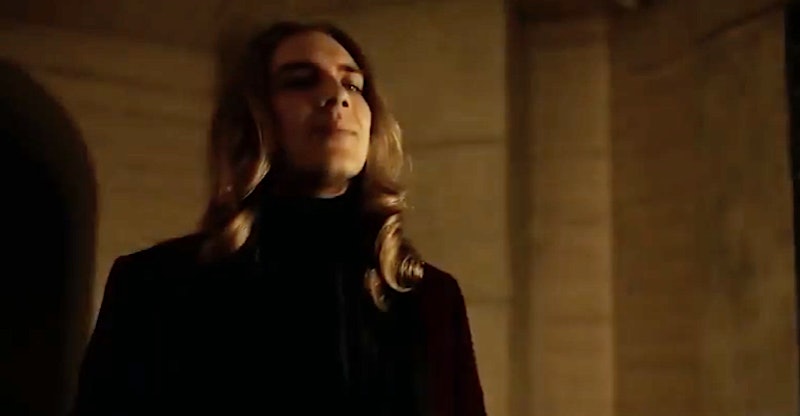 The premiere of American Horror Story: Apocalypse found the world being thrown into utter chaos as nuclear missiles were launched at various major cities all around the world. Only a select chosen few people were given the means to survive, and even though the episode provided a glimpse of what the new world looks like at Outpost 3 (cube meals, color coordinations and all), it neglected to answer one of the biggest, and perhaps most important, mysteries of all: who started the apocalypse on American Horror Story in the first place and why?

That's not to say that we don't have any information on the matter. When Timothy (Kyle Allen) and Emily (Ash Santos) enter Outpost 3 for the first time, they are greeted by Sarah Paulson's Wilhelmina Venable, who goes on to explain more about the shadow organization responsible for these fallout shelters. They're known as the Cooperative and, according to Ms. Venable, consists of 12 of mankind’s greatest minds who want to ensure the survival of humanity in the wake of a nuclear holocaust. They get their funding from the rich and elite, who are willing to shell out a pretty penny in order to secure a spot in one of the bunkers. However, they also round up people, like Emily and Timmy, who apparently have something genetically special in their DNA that make them worthy of surviving. By all outward appearances, the organization's motives appear to be well-intentioned, but is that necessarily the case? And is Venable telling the truth?

At the end of last week's episode, Outpost 3 was visited by a man who seems to rank pretty high up in the chain of command within the Cooperative. His name is Michael Langdon, and if you think that name sounds eerily familiar, it should. Played by Cody Fern, Michael is actually the grown up son of Vivien Harmon (Connie Britton) and Tate Langdon (Evan Peters).

If you recall, at the end of Murder House, Vivien died giving birth to twins who had two different fathers. The twin that died during child birth belonged to her husband, Ben, but the other one that survived was the product of when Tate assaulted her when they first moved into Murder House. A medium named Billie Dean Howard told Tate's mother, Constance, that her son's child would go on to become the "antichrist," but she still decided to raise him as her own and gave him the name Michael. The season ended with viewers getting a little taste of what this kid could be capable of (like killing the nanny, for instance).

So that fact that he's now a prominent figure in the Cooperative may suggest that this organization isn't as helpful as it seems. If Michael really is the antichrist, it's entirely possible that he's responsible for the apocalypse altogether. He may not have been the one to launch the missiles, but he could definitely be the one who set the idea in motion.

The only question is, has he infiltrated the organization without their understanding of his true intentions or are they in on the whole thing? Given that Ms. Venable and her henchwoman Miriam (played by Kathy Bates) have been secretly deviating from the Cooperative's orders by torturing the very guests they're supposed to be protecting, it wouldn't be surprising if the Cooperative itself it meant to be doing good, but Michael is using it for his own means.

Then again, maybe the person responsible for starting all of this could be someone else entirely and Michael is just taking advantage of an opportunity. Either way, he definitely has to be connected in some way. But it takes a village to bring about the end of days, so if anyone else is involved in this endeavor, we'll find out soon enough.