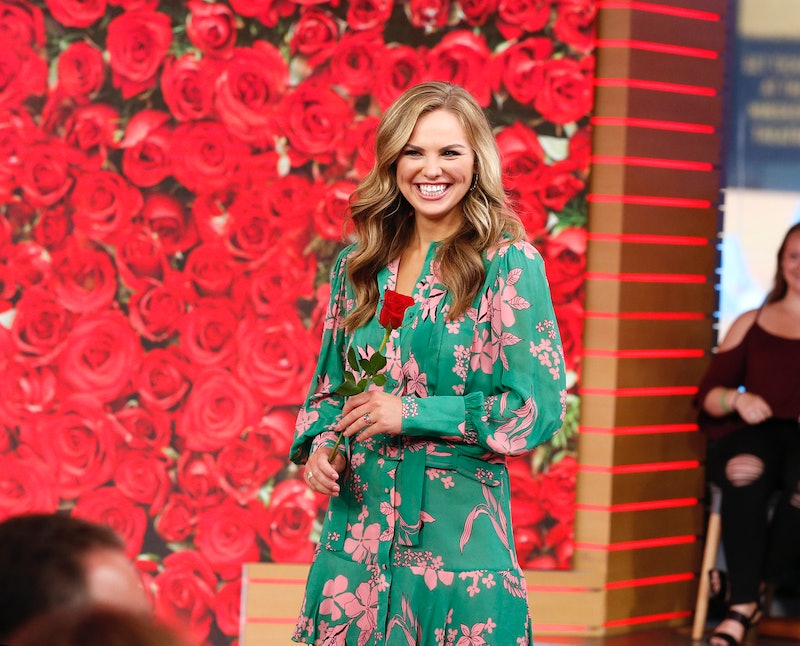 Bachelor Nation still doesn't know who will receive Peter Weber's final rose, but the show's producers are already preparing to announce their next star. Despite the fact that there are still several episodes of The Bachelor season left, Good Morning America will reveal who will be the next Bachelorette during their show on Monday, March 3. The big news was first shared by GMA producer Tony Morrison on Twitter, who also added that the lucky lady will be answering questions from fans after being revealed on the show.

Traditionally, the new Bachelorette is announced during the After the Final Rose special, as she tends to be one of the finalists — or the winner herself, as in the case of Becca Kufrin, whose breakup with Arie Luyendyk was aired during the finale special. However, in 2017, the show's producers announced that Rachel Lindsay would be the Bachelorette weeks before the finale for Nick Viall's season aired, so it's not totally unusual for The Bachelorette to break their own rules.

At the time, Chris Harrison revealed on Live With Kelly that they made the announcement earlier than usual due to the fact that filming for Rachel's season was set to begin "days" after the finale aired, and they wanted to begin casting for her season. On Feb. 27, Reality Steve tweeted that the first filming location for the new season of The Bachelorette had already been revealed, so the producers could be in a similar situation, and feel like announcing the Bachelorette early in order to get a jump on casting and filming.

Naturally, the Good Morning America announcement has sent Bachelor Nation into a frenzy of speculation about who will be chosen as the 16th Bachelorette. The timing of the announcement seems to suggest that the producers have chosen someone from a previous season to be the next Bachelorette, instead of someone from Peter's drama-filled season.While many have theorized that Hannah Brown could return to The Bachelorette after ending her engagement to Jed Wyatt in the finale of her season, the former beauty queen announced plans to rejoin the Dancing With the Stars Live Tour for several dates in March, which would conflict with filming and prevent her from returning. However, Hannah isn't the only former Bachelor contestant to reportedly be considered for the role.

According to Cosmopolitan, former contestants Tia Booth and Tayshia Adams were being considered to be the next Bachelorette. Tia made it to the final four on Arie's season and appeared on Bachelor in Paradise in 2018 while Tayshia was one of the final three contestants on Colton Underwood's season and dated John Paul Jones on the most recent season of Paradise. Both women have built up a great deal of fan support on their respective seasons, so they would make sense as possible Bachelorette picks.

Another popular theory is that the Bachelorette producers are considering reaching even further back into the show's history to cast Clare Crawley as the Bachelorette. She was famously the runner-up on Juan Pablo Galavis' 2014 season, and then later appeared on the inaugural season of Bachelor in Paradise.

Of course, there is one woman from Peter's season who is reportedly in the running: Kelsey Weier, who made it to the final four, but was eliminated after her hometown date. In his Feb. 26 article, Reality Steve reported that Kelsey had been interviewed by producers for the role, but the Iowa native told People at the Women Tell All taping that becoming the next Bachelorette "was never my intent or goal" before appearing on the show. (Which, for the record, is not a "no.")

With so many possible options — from current and past seasons alike — it seems like anyone in Bachelor Nation could possibly be the next Bachelorette. Now, they just need to hold themselves over until Monday morning to find out, once and for all.