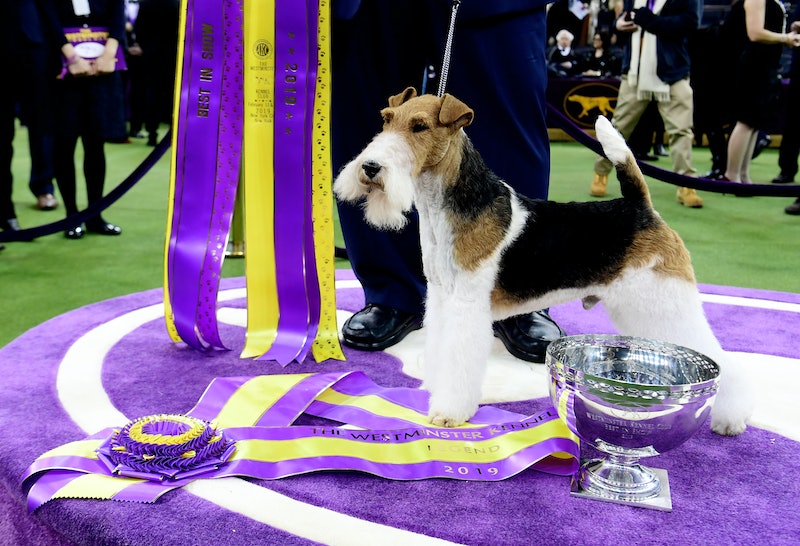 Many hold firm the belief that every dog is the best dog. Big dogs are good, small dogs are good. Ones with short ears, long ears, smushed faces and snouts are ALL good. But that sort of mindset has to be abandoned once a year during the Westminster Dog Show. Comparable to the Academy Awards in the Dog Showing world, the Westminster is one of the largest dog shows in the world. The competition was tough during yesterday during the 143rd rendition of it, but in the end it was King, a Wire Fox Terrier, who won the Westminster Dog Show.

This weekend, the city went to the dogs. Pups of every shape, size, and color gathered in NYC for the competition and celebrations. Barking could be heard blocks away, and bones were in generous supply. Really, the scene was something out of a dog lover's fever dream. A weekend of grooming and preparation culminated in the big event yesterday, Feb. 12, at Madison Square Garden. BuzzFeed reports a total of 2,800 dogs and more than 200 breeds were featured during the two days of competition.

But, the excitement didn't begin with the presenting of the final ribbon. In fact, this was only the grand finale. The whole event was worth celebrating.

Dog shows work similarly to other awards competition. Bracket-like, if you will. It is the same general premise: there are different categories, and the winner of each of those goes on to vie for the top spot.

The seven groups are terrier, toy, working, sporting, non-sporting, hound, and herding, according to the American Kennel Club. Aside from the terrier that went on to win it all, the winners of each category were a Havanese, a Boxer, a Sussex Spaniel, a Schipperke, a long-haired Daschund, and a Bouvier de Flandres, respectively. Though, in an unforeseen turn of events, the Schipperke was ruled ineligible following its win (the first for the breed) for an "ownership-related issue," Westminster officials told USA Today. A conflict of interest between one of the judges and the dog's owners.

King, though, was the star of the show. Per USA Today, the winning Wire Fox is the first terrier to earn the title in almost a decade; Sky, another wire fox terrier, won in 2010.

It is interesting to see just how different the showing world is from the typical American dog owner. The Golden Retriever, for example, has held the status of most popular breed in the United States for 27 years. But, a Golden Retreiver has never won a Best in Breed title, let alone a Best in Show. That pattern holds true for most of the other dogs that consistently rank most popular.

The Wire Fox Terrier, which won the Best in Show title this year and is, in fact, the winningest breed in history is not even in the top 100 most popular dog breeds in the United States.

Whatever your preference, nobody can resist watching a room of pups doing their absolute best to win the hearts of the thousands watching. It is not hard to fall in love with each and every one.