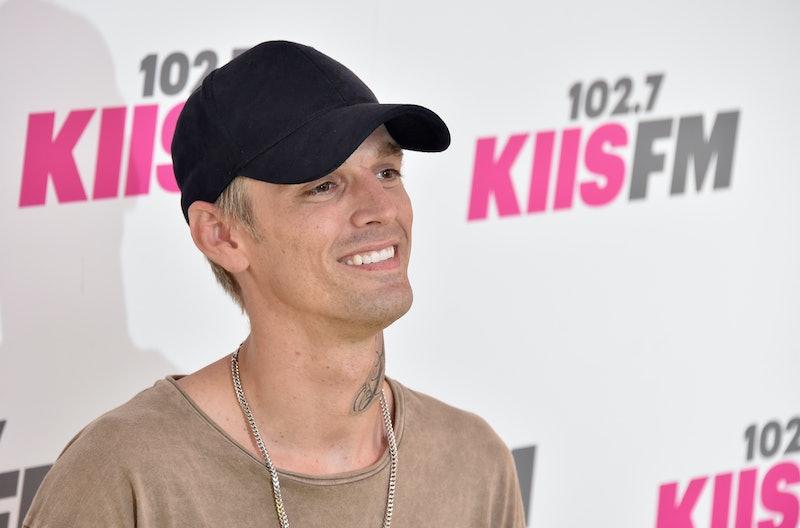 Aaron Carter, brother of Backstreet Boys singer Nick Carter and a former pop star in his own right, is back in the spotlight for the new season of Marriage Boot Camp: Family Edition. Because the show is focused on his family, it's unlikely that it will address other aspects of his personal life. But seeing him onscreen may prompt viewers to wonder if Carter is dating anyone in 2019, and how they might be supporting him as he navigates this turbulent time.

Carter has been linked to a few women within the past year or so, but he appears to be single at the moment. He was previously dating artist Lina Valentina, but confirmed to Us Weekly in August that they'd broken up after a year together. He told the outlet in a statement that though they'd "talked about having kids," their relationship eventually turned "unhealthy" and they thought it best to go their separate ways. "I don't have any regrets being with Lina, and… I think this decision was the mature one," he continued. "My soulmate is out there somewhere, and I'll meet her soon."

Unfortunately, their split doesn't seem to have been amicable. A few weeks later, E! reported that Carter had taken out a restraining order against Valentina. (The order was reportedly dropped in September after Carter failed to show up in court, per TMZ.)

In September, Carter sparking dating rumors with YouTuber Trisha Paytas after photos of them kissing circulated online. However, Paytas clarified in a YouTube video that though they'd hooked up in the past, there wasn't "that chemistry there," and their relationship was strictly platonic.

"I'm a lonely person and I want a boyfriend but we're just friends," she said. "I'll always say good things about him even if he trashes me. I think we both just need love in our lives and we'll be happy."

Carter also asserted on Twitter that he's single and "not rushing into anything."

He does, however, have a lot going on with his family. According to a preview for Marriage Bootcamp, Carter blames himself for the deaths of his sister (who died of a drug overdose in 2012) and father (who passed from a heart attack in 2017).

"I felt like I had been responsible for the death of my sister, for the death of my dad, for my family falling apart," he tells the show's doctors in the clip. His mom, who is also on the show, feels that pain, saying in a confessional, "He just was so busy with his own life that he wasn't there, and I think he wanted to be there for them. In his heart, he feels like he could've done something more."

There's more family drama off-screen, too, though since it's so recent, it probably won't be addressed on Marriage Bootcamp. In September, Aaron's brother Nick filed a restraining order against him, claiming Aaron had made violent threats against him and his pregnant wife, Lauren Kitt. Shortly afterward, Aaron denied Nick's accusations on Twitter, instead alleging that Nick was retaliating against him for speaking to one of the women who previously accused the BSB member of sexual assault. (Bustle reached out to Aaron's assistant and Nick's reps for comment on the situation, but did not receive a response.)

Aaron, who has been open about his mental health struggles over the years, concluded by tweeting that he was in recovery and needed people to support him right now. With all of that in mind, it's probably best that he's focusing on himself and staying healthy until the right person comes along.