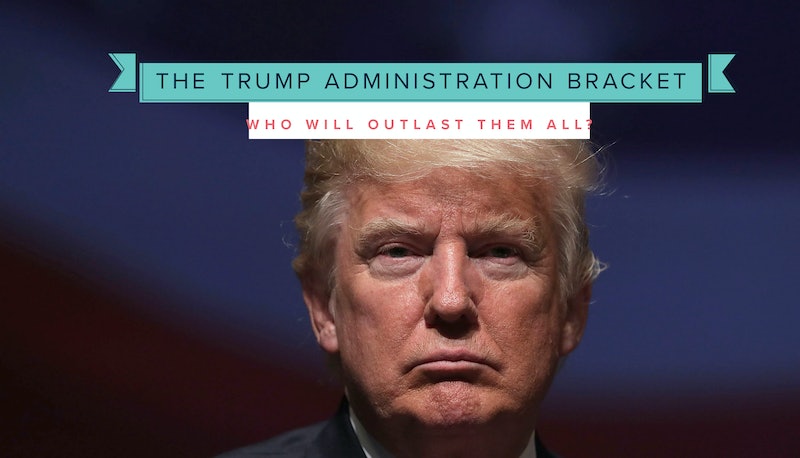 Michael Flynn. Reince Priebus. Sean Spicer. Anthony Scaramucci. And now, Steve Bannon. The ghosts of the Trump Administration past. Some big players in President Donald Trump's inner circle have quickly come and gone, and it's getting pretty hard to keep track of them all. But now you can at least try, with a printable Trump Administration Bracket. Who will outlast them all?

My money is on Ivanka, but even that's not a guarantee. There's been constant controversy swirling around the president's daughter, with many people begging her to keep her father in line and calling her out when they feel she's complicit in what's happening to the United States. That's a bit embarrassing, that the country feels the first daughter needs to straighten out the president — and if there's one thing Trump has proven, it's that he'll get rid of anyone who embarrasses him.

In the approximately seven months that Trump has been in office, there have been more than 10 people in crucial roles who have left, quit, been fired, or are otherwise just no longer in the White House. The Trump administration's leadership has been in constant turmoil, and while people might feel like celebrating Bannon's departure, his absence won't suddenly mean that everything's going to be peachy from here on out.

Click this link to download the above image as a printable Trump Administration Bracket. Print it out, hang it on your bulletin board, keep track of the crumbling White House, and maybe weep a little as you realize that you're happy certain people are gone but are still devastated by the fact that our country's leadership is in shambles.

Obviously, don't forget to go ahead and mark Jared Kushner as the winner of his round vs. Bannon. You got a bit of a head start.