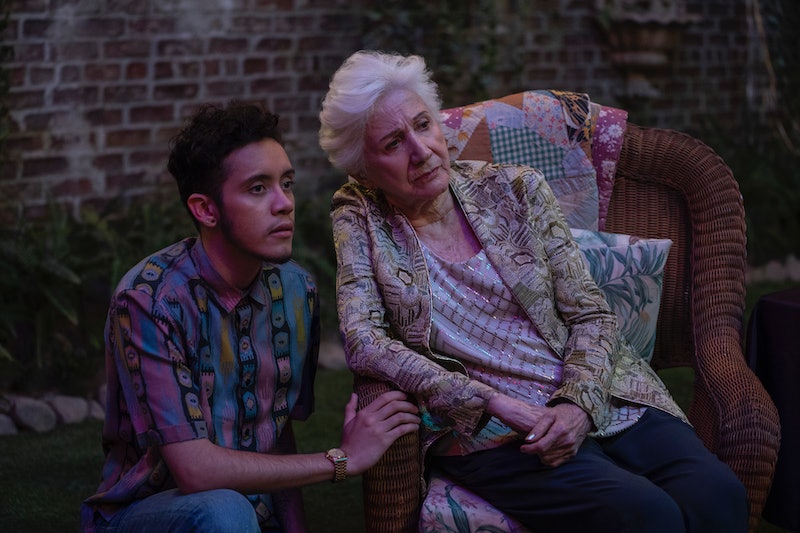 Spoilers ahead for Tales of the City Season 1. When we first meet Anna Madrigal in Netflix's Tales of the City, she just seems like a sweet motherly/grandmotherly figure to the queer people of San Fransisco. And that's what much of the show is about: the bond of the found family she's brought together at 28 Barbary Lane. But by the end of the first episode, we learn that she's also hiding a big secret, and the mystery of who's blackmailing Anna ends up having just as large a role in the story. It's not until the final episode that we finally learn the truth.

Until midway through the season, we don't even know what Anna is being blackmailed for. In the first episode, she receives a letter with an old photo of her standing with several other trans women. The attached note says, "I know you're a fraud." In the third episode, she receives another letter. This one contains a photo of her and a man in 1966, as well as property deed transfer paperwork for Barbary Lane. Rather than let her secret be expose, Anna signs over the property to the mysterious blackmailer.

Later in the series, a flashback episode of a young Anna in 1960s San Fransisco reveals what she's been hiding all these years. She had begun dating a cop, even while her trans sisters were being brutally attacked and "taxed" (basically robbed) by police every night. When her boyfriend's cop buddies found out that Anna was trans, her boyfriend told her that she had to go. But first, he gave her a large sum of money that he'd saved from the raids he'd conducted against Anna's very own trans friends. She used the money to pay for gender confirmation surgery, and she also bought Barbary Lane. Then she simply lived with the shame of knowing where the money had come from while fostering a queer community in her own backyard.

Anna's story is a complicated one. She profited off the pain of her own community, but she clearly spent her life trying to rectify that by making Barbary Lane a sanctuary for queer people. Still, there was no mercy from Claire (Zosia Mamet), who turns out to be the one blackmailing Anna all along. In filming her documentary about "queer community and its dissolution as a result of the strangling grip that capitalism has on San Fransisco," Claire interviewed Anna's old friend Ysela. That's how Claire learned about Anna's deceit, and she used it to blackmail Anna into giving her Barbary Lane... just so that she could demolish it.

"Tearing this place down is going to be the perfect ending for my documentary," Claire announces from the balcony of Barbary Lane in such a Scar-from-Lion-King way that you half expect animated hyenas to start cackling behind her. It's all a little bit cheesy: her motive was more selfish than righteous, and her response to being found out was comically over the top. But it's not even close to hinted that she might be the blackmailer, so it is, at the very least, a surprising twist.

In any case, while Anna didn't make all the right choices, you can see and understand both sides of the story when it comes to what she did. And in the end, Anna thanks Claire for blackmailing her because it forced her to tell the truth and step out from the shadow of her shame. She dies shortly afterward, and Mary Ann muses that perhaps she was just waiting until she could let that burden go before she could pass on. (Not that blackmailing is OK, but Anna made the best of a bad situation.)

Claire's evil villain turn was sudden, and a little unearned and corny. But that doesn't take away from the series as a whole, which is less a twist-filled mystery, and more a celebration of this little queer found family. Anna fostered that sense of community — perhaps as penance for what she'd done — but no matter the reason, she changed people's lives for the better. That's why, in the end, her adopted family forgave her darkest secret.