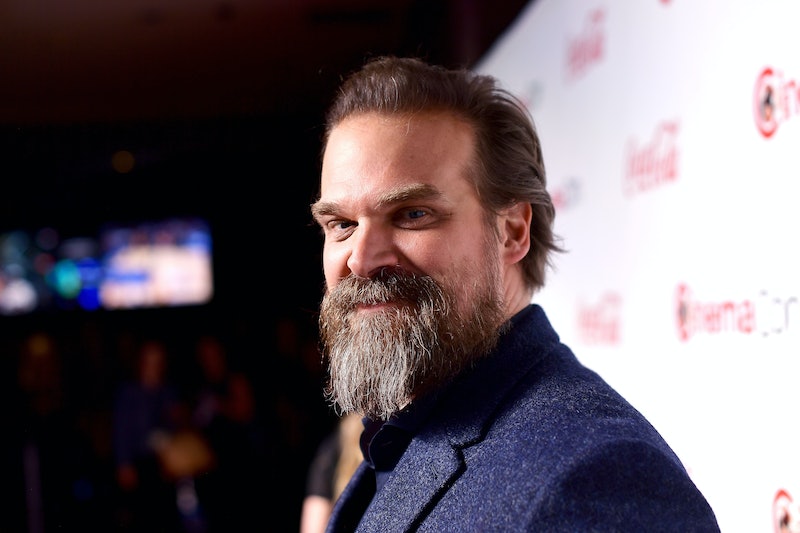 Marvel has announced their upcoming slate for Phase Four of the Marvel Cinematic Universe (MCU), and it sure sounds exciting. Among the big announcements was that Black Widow is finally, officially getting her own film, and as a cherry on top, Stranger Things' David Harbour is co-starring. So who's David Harbour playing in Black Widow, and why is it likely to strike a nerve with Stranger Things fans?

In Black Widow, Harbour is portraying a Russian character named Alexei, who goes by the codename Red Guardian. This is a pretty remarkable coincidence considering what Harbour's Stranger Things character Jim Hopper went through in the Netflix series' recent season. During Stranger Things 3, Hopper uncovers a Russian conspiracy in Hawkins, Indiana after capturing a Russian scientist named... wait for it... Alexei. Near the end of the season, Alexei is killed, and Hopper also appears to lose his life in the Russians' secret base in the season finale. The fact that Harbour is now playing a Russian named Alexei in his next major project is too big of a coincidence to ignore, but hopefully this version of Alexei doesn't suffer the same fate as his lovable countryman.

With the Netflix elephant in the room taken care of, it's time to get down to the business of discussing just who exactly Red Guardian is. First off, there have been several characters called Red Guardian in Marvel Comics. The version Harbour is portraying was the second to be introduced, but he is arguably the best known. Alexei Shostakov first appeared in the pages of 1967's Avengers #43, and was created by writer Roy Thomas and artist John Buscema. He was meant to be the Soviet Union's answer to Captain America, embodying the ideals of communism and fighting against the Western Menace.

Like Captain America, Red Guardian utilizes a disc-shaped weapon as his main source of offense. But instead of a shield, Alexei throws his belt buckle, which then returns to him magnetically. How menacing. Unlike Cap, Red Guardian does not have any augmented or superhuman abilities. He is highly-trained in combat and espionage, making him more similar in makeup to Black Widow than to Steve Rogers.

There's a reason why Red Guardian and Black Widow have similar abilities, and it's because they share quite the extensive history. The two were actually a married couple who then joined the KGB together. Natasha Romanoff became the Black Widow — who in the comics started out as a villain — while Alexei became a test pilot. He was then chosen to become Red Guardian, and the Russian government faked his death to turn him into the Soviet hero. Natasha then defected and joined the Avengers, which is who she was with when she next encountered her thought-dead husband.

Red Guardian battled the superhero team, coming into conflict with Black Widow and Cap. During the course of the battle, Red Guardian had a change of heart and decided to save his wife and rival from his comrades. After saving their lives, Red Guardian was killed by his criminal accomplice, Col. Ling. Or so it seemed. This being a comic book story, Red Guardian resurfaced years many later, alive, and once again a villain. This time, he tries to assassinate his former wife in the 2004 Daredevil storyline "The Widow," but is unsuccessful.

It's unknown how much of Red Guardian's backstory will appear in Black Widow — Harbour has stated they're playing with the character and aren't beholden to much — but it's clear from the comics that these two characters certainly have plenty of history to draw from.