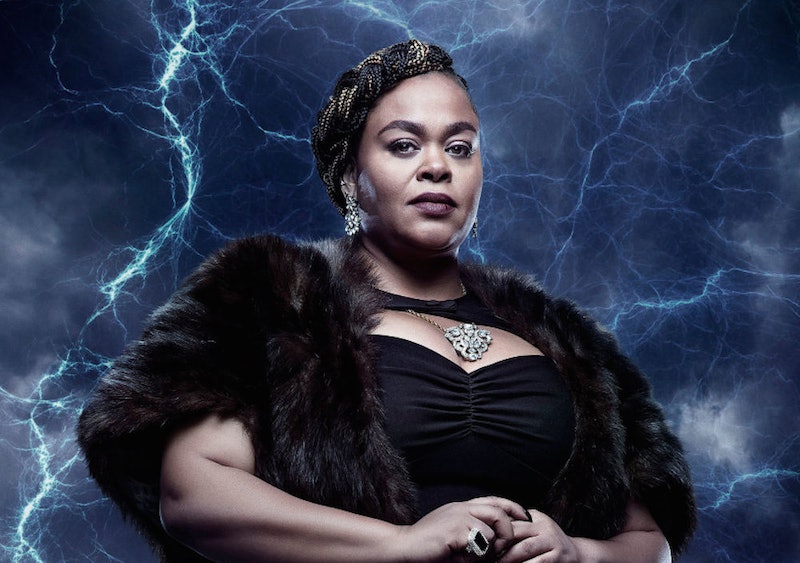 Since CW’s Black Lightning (executive producer: Mara Brock Akil) first premiered, the titular character’s arch-nemesis Tobias Whale has been the head guy in charge, wreaking nothing but havoc on Freeland and shooting folks with a harpoon. But as viewers learned in the most recent episode of the superhero series, there’s someone else calling the shots over Tobias. The Black Lightning episode “Lawanda: The Book of Burial” introduced Jill Scott as Lady Eve. And Lady Eve's debut brings nothing but pointed words and threats that, quite frankly, have Tobias shaking in his boots. But who exactly is Lady Eve on Black Lightning? Unfortunately, she's the crime-fighting vigilante’s latest nightmare.

According to Lady Eve's official character’s official description, she “serves as a bridge between Tobias Whale and a secret group of corrupt leaders.” On the outside Lady Eve seems pretty harmless — but don't get it twisted, she's all venom. By day she works in Freeland as the owner of a funeral parlor, but she quickly becomes an adversary to Black Lightning.

First introduced into the comic book realm as a member of the international terrorist group, the Kobra Cult, Lady Eve is no stranger to stirring up drama. After her debut in 1985's Batman and the Outsiders #24 issue, Lady Eve joined cult leader and military tactician Kobra on his plan to mind control U.S. Army officials and blackmail the U.S. Government. Eventually though, they were stopped by Batman and the Outsiders — of which Black Lightning was a member. This explains why she, like Tobias, is all for taking down Black Lightning's (co-producer: Melora Rivera) main character.

Speaking of Tobias... he's been struggling to accept the news that despite his best efforts to kill Black Lightning nine years ago, the electric-powered superhero is still alive and kicking (butt). When Tobias goes to see Lady Eve, in so many words she echoes what he said to his workers: Black Lightning has got to go before things get real ugly.

Lady Eve makes it clear to Tobias that Black Lightning's presence in Freeland makes the citizens think they can step up to people like the 100 gang and fight back. And as far as she's concerned this is a no-go. Tobias bends to her demand that Black Lightning be stopped and promises her that he'll handle it ASAP.

Up until this point Tobias has been ruthless, with his actions and his language dripping with confidence. But Lady Eve's presence brings out something in Tobias viewers hadn't seen before: fear.

“Lady Eve is the only person of authority over [Tobias]," Marvin Jones III —who plays Tobias on the show — told Comic Book Resources. "It means something to him, I think ultimately because it’s a woman. I think ultimately his affinity for Lady Eve has to do with the fact that she’s kind of a mother figure to him — but she’s not his mother.”

Mother to Tobias or not, Lady Eve makes it quite clear to everyone that he's to do as she says. For a split second you almost want to root for Lady Eve because Scott is just that good of an actress, and then you remember she's a villain.

As the rest of Season 1 continues, viewers will learn more about the complicated relationship between Lady Eve and Tobias, according to Entertainment Weekly. “Throughout this first season of Black Lightning, you’re going to be exposed to the human side of Tobias Whale as well as the sociopath that he is,” Jones told the magazine. “He’s going to go through an emotional ride and being the focus of negativity starts to take its toll on his personal life.”

Black Lightning is just getting re-acquainted with the superhero life and already he's got two powerful villains on his tale. And judging by how quickly Gambit deleted that video footage of Tobias, something tells me that Black Lightning should be very afraid.