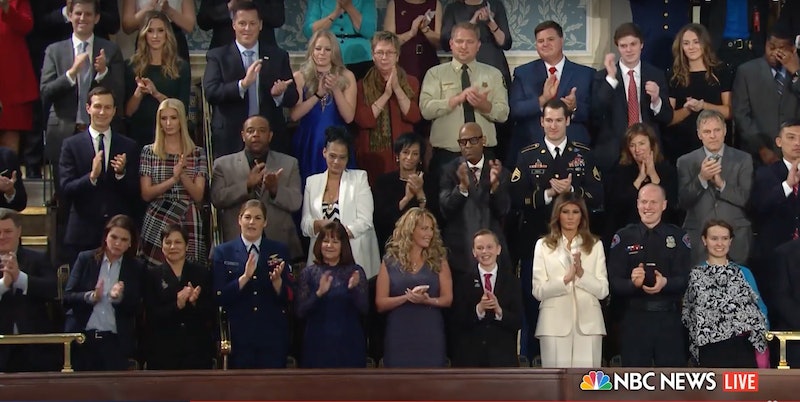 Before Trump's first-ever State of the Union began, news cameras panned around the room, showing some faces you might not know. Guests' seating is always telling at such events. Some lawmakers, for example, remained seated when Trump approached the podium. Other lawmakers brought guests — oftentimes people who have been affected by the president's policies — to make a point to the nation's leader. So, you might be wondering about the officer seated next to Melania Trump at the SOTU. He has a pretty fascinating (and touching) story.

Ryan Holets is a police officer in Albuquerque, New Mexico who took in a baby girl whose mother was homeless and addicted to opioids. In fact, he and his wife, Rebecca, agreed to adopt the baby, who they named Hope, before she was even born. "I've gotten so tired of seeing so many situations where I want to help but can't," he said to CNN. "And in that moment, I realized I had a chance to help and to heck with the risks."

It's changed my perspective forever. I can't drive anywhere without noticing people that are homeless. I can't help but notice people that are panhandling. Then I think about everything they've gone through.

Just by chance, Holets noticed a couple injecting something into themselves while responding to a false alarm one day. What happened next was entirely unexpected.

CNN reported that the woman, who was eight months pregnant at the time, broke down. She revealed that she was addicted to crystal meth and heroin. Later, the couple approved of the adoption of their baby girl, who was born in October.

During his SOTU, Trump gave the couple a big shoutout.

As we have seen tonight, the most difficult challenges bring out the best in America.

We see a vivid expression of this truth in the story of the Holets family of New Mexico. Ryan Holets is 27 years old, and an officer with the Albuquerque Police Department. He is here tonight with his wife Rebecca. Last year, Ryan was on duty when he saw a pregnant, homeless woman preparing to inject heroin. When Ryan told her she was going to harm her unborn child, she began to weep. She told him she did not know where to turn, but badly wanted a safe home for her baby.

In that moment, Ryan said he felt God speak to him: "You will do it -- because you can." He took out a picture of his wife and their four kids. Then, he went home to tell his wife Rebecca. In an instant, she agreed to adopt. The Holets named their new daughter Hope.Ryan and Rebecca: You embody the goodness of our Nation. Thank you, and congratulations.

It's clear that Melania also had a lot of respect for all of her 15 guests. In fact, instead of arriving at the SOTU with Trump, she decided to arrive with them.

"In addition to holding a White House reception and photo opportunity for them, along with their friends and family, she is accompanying them to the Capitol," her spokeswoman Stephanie Grisham told CNN. "Once there, the first lady and Mrs. Pence will host a more intimate meet-and-greet to engage with them on a personal level prior to the speech."

Though Trump's speech itself met its fair share of criticism, learning about Americans like the Holets definitely made things much brighter. Regardless of party affiliation, everyone should agree that their decision to open their arms to a baby shows the goodness in humankind. And right now, it seems like people need every glimpse of hope they can get.