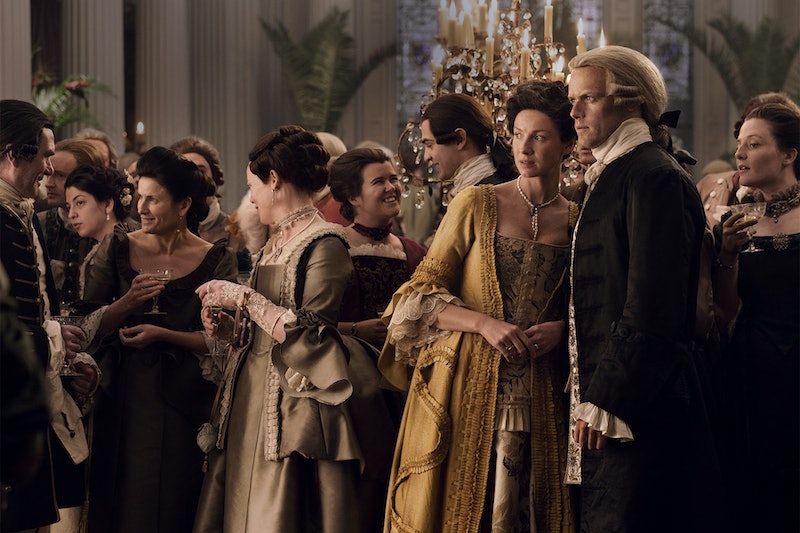 Many players in the Outlander world return during the penultimate episode of Season 3, "The Bakra." Spoilers follow. But no character's comeback is quite as epic as Geillis Duncan's. The time traveler is in Jamaica and obsessively seeking out the solution to a prophecy on Outlander. This prophecy is the reason why sailors abducted Young Ian and why the seer Margaret Campbell and her greedy brother Archibald traveled to the West Indies. At a party at John Grey's governor home, Geillis has Margaret read the prophecy, which says a Scottish king will rise if a 200-year-old baby is killed. This prophecy may sound incoherent, but it actually spells trouble for Claire and Jamie. And little does Geillis know, but she has already met the child in question.

Geillis has hired Margaret to help her uncover the "prophecy of the Brahan Seer," which is supposed to inform her of when there will be a Scottish king. (As the BBC notes, there is a real legend about the Brahan Seer of Scotland from the 17th century.) According to Geillis, Margaret must hold three sapphires of the MacKenzie clan to successfully interpret the prophecy. And Geillis turns out to be right. Once all three stones are in Margaret's hand, she delivers the following message:

"When twice twelve hundred moons have coursed between man's attack and woman's curse and when the issue is cut down, then will a Scotsman wear a crown."

Margaret's brother Archibald is able to explain that this means, "A new king will rise in Scotland upon the death of a child that is 200 years old on the day of his birth." And while Geillis is initially clueless about this Benjamin Button-esque 200-year-old baby, viewers should be one step ahead of her. The prophecy is most likely referring to Jamie and Claire's child, Brianna.

Brianna was conceived in the 1700s and born in the 1900s, so she truly is 200-year-old child. And while Geillis hasn't made that connection just yet, there's no doubt she will in the Season 3 finale. It can't be a coincidence that Jamie hands Claire the photos of Brianna before he's arrested. Since Claire is going to Geillis' Rose Hall home to free Ian (interestingly enough, there is a real-life legend of a White Witch who lived in Jamaica's Rose Hall), Geillis will probably see Claire's photo of Brianna and figure it out. It's particularly not good news for Bree that Geillis will recognize her in the photos since they met in the Season 2 finale, "Dragonfly in Amber."

Geillis last appeared in "Dragonfly in Amber" as the 20th century's Gillian Edgars, leader of the Scottish nationalist group, the White Roses of Scotland. Brianna overheard Gillian say in a speech that she wondered what Scotland would be like if the rebels had won the Battle of Culloden and that she passionately believed Scotland should be ruled by a Scottish ruler. But Gillian proved to be an unhinged extremist, since she decided to travel back in time to "further the cause" and murdered her husband in the process. "She's a little crazy on the whole Scottish nationalist thing," Brianna said of her. And Geillis' actions in "The Bakra" prove how painfully true that is.

Since the prophecy says the child will have to die on the day of its birth, fans can assume Geillis will want to travel through time to 1948 Boston to kill Brianna. It doesn't seem like the blood-bathing Geillis would hesitate to murder an infant, but she may become even more motivated to kill her when she learns that Brianna's parents are responsible for murdering her love, Dougal MacKenzie. Geillis believes that Dougal died a hero at the Battle of Culloden. But if she discovers that Jamie stabbed his uncle, Geillis will have wrath on her side when it comes to killing baby Brianna.

Yet, Outlander already provided viewers a clue about how Geillis' story will end. Back in the fifth episode of Season 3, "Freedom & Whiskey," Claire's friend Joe Abernathy shows her the bones of a white woman who was killed in a cave in the Caribbean over 150 years ago. Joe strangely has the same last name that Geillis currently does. And Claire learned in the last episode from Father Fogden that there is a sacred cave named Abandawe, and Margaret previously warned Claire of Abandawe in "'Crème de Menthe." So it's likely that Claire and Geillis will face off in this cave in the Season 3 finale as Claire attempts to stop Geillis from traveling in time to murder an infant Brianna. And considering Outlander is Claire's story — and not Geillis' — there's a very good chance that Claire will be the witch to win this battle.

Viewers of the TV show who have not read Diana Gabaldon's books may feel at a disadvantage right now. But, based on forum discussions, the prophecy and Geillis' intentions were even more confusing in the Voyager book. Slight book spoilers follow. Questions about the prophecy lingered for readers until some more details were revealed in the most recent book, 2014's Written in My Own Heart's Blood. In that book, Brianna discovers a letter from Frank that talks about the Brahan Seer's prophecy. As the Tumblr page Drunklander outlines, Frank warns Brianna that he discovered a genealogy chart that indicates the confusing dates surrounding when she was conceived and when she was born. This could mean that the prophecy that Geillis is so consumed by in Voyager could continue to play a major part in future Outlander books.