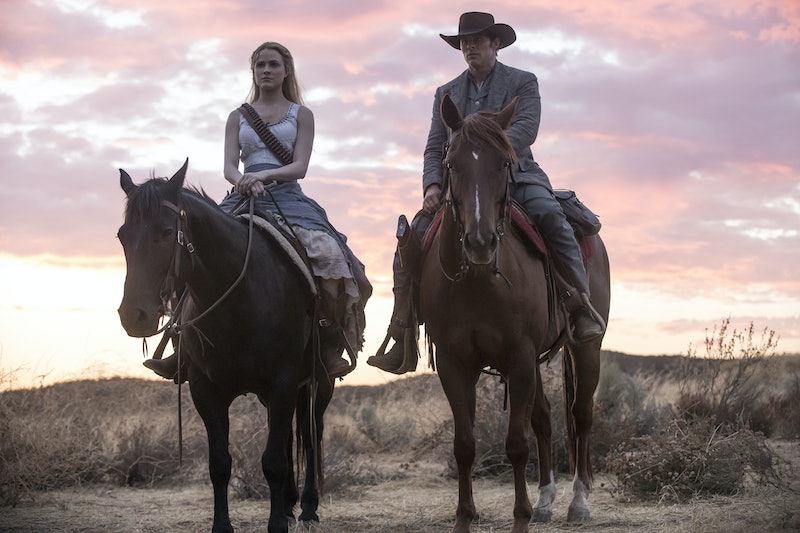 Spoilers for Westworld Season 2, Episode 2. While the Westworld Season 1 finale wiped the slate violently clean and set the stage for a straightforward robot rebellion in Season 2, the new batch of episodes hasn't been content to play it safe, introducing a wide array of new characters, quests, and puzzles to solve. Who is the Colonel on Westworld Season 2? In the sophomore season's second episode, avenging host Dolores declares her intention to find this mysterious new character and join forces with him in the fight against Delos and the rest of humanity. But will he prove to be an ally… or another adversary to defeat?

As satisfying (and kind of disturbing?) as it was to watch Dolores herself gun down the smug Delos board members in the Season 2 premiere, she wisely realized she would need an actual army if she was actually going to defeat the well-armed forces the corporation was bound to send in to take them out. The good news is, an army already exists inside Westworld; the bad news is, they're murderous disloyal mercenaries known as Confederados.

Viewers first met the Confederados in Season 1 when the former Confederate soldiers hired William, Logan, and Dolores to steal some nitroglycerine to aid in their merciless slaughter of Native and Mexican people. The leader of such a despicable group of men likely isn't going to be anyone a normal person would want to tangle with. Good thing Dolores could never be described as a "normal person." (Or even a "person," if you're being technical about it.)

Before she can get to the Colonel though, Dolores has to work her way up through the ranks starting with the Major — Major Craddock, specifically, as played by Kingdom actor Jonathan Tucker. (Craddock was also glimpsed once earlier in the episode, as one of the hosts partaking in the demonstration for Logan; so it's immediately clear he's a very old host, one of the park's originals.)

Unsurprisingly for a man of his caliber, Craddock is initially resistant to the idea of suddenly taking orders from a rancher's daughter. So Dolores happily puts forward a demonstration of her prodigious powers to persuade him: after gunning down Braddock and all of his men, she uses a kidnapped tech to bring all the "dead" hosts back to life. Her newly undead converts in tow, Dolores marches on the Colonel's fort with the aim of recruiting even more soldiers to her cause.

But will the Colonel be persuaded as easily as the Major? If Dolores isn't careful, she may find herself facing off against two enemies instead of just one; seeking out an ally as potentially dangerous as he is means she could end up fighting both the Delos forces and the Confederados. Thanks to Season 2's multiple timelines, viewers already know that ultimately things don't go well for Dolores' rebellion. In only about two weeks' time, her entire robot army will end up dead, floating in that out-of-place lake in the middle of the park.

Could the Colonel have something to do with why Dolores' host army ends up in that body of water? Bernard said that he killed them all, but whether or not he was telling the whole truth — or even remembering things correctly — is very much still up for debate. There are obviously plenty of conflicts brewing, both between the hosts and the humans and between the hosts themselves. As great as it would be to see the hosts present a united front, the reality is much more complex than that. And Dolores will have her work cut out for her if she hopes to accomplish her goal of taking over not just Westworld… but the whole world.