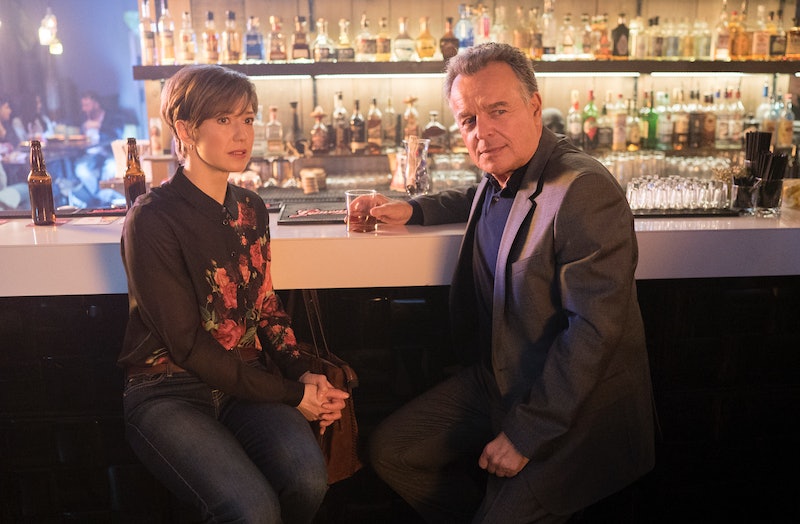 Fargo has always been an odd show, but it seems to have made the transition from just odd to flat-out weird in Season 3. Earlier episodes in the season hinted that things were going to get strange, and that promise was delivered on in the June 7 episode, "Who Rules the Land of Denial?" After a chilling chase scene through the Minnesota woods, an injured Nikki and Mr. Wrench end up at an ethereal bowling alley and Nikki has a conversation with a man who carries a great deal of biblical knowledge and a tiny cat named "Ray." Who's the bowling alley man on Fargo and where has he been seen before?

It's no accident that the man in the bowling alley is played by Ray Wise, one of the stars of Twin Peaks, the original example of how weird television can be. And this Fargo character carries an omnipresent, inhuman energy that seems to be carried over from the David Lynch show.

This isn't the first time Fargo fans have seen Wise on the series. This mysterious man was introduced in the third episode of the season, "The Law of Non‐Contradiction" as Paul Marrane, a man that Gloria Burgle happened to share a flight with and run into at another bar. "Paul Marrane" also happens to be the name of an immortal mythological being who famously wanders the Earth.

When Paul and Gloria talk, it's about grand concepts — the nature of evolution and paradoxes and such — but when Paul and Nikki speak at the bowling alley, the entire conversation has an overwhelmingly biblical tone. Paul speaks of Hebrew mythology, notable Jewish figure Rebbe Nachman, and quotes Psalms 94:16, "Who will rise up for me against the wicked? Who will take a stand for me against evildoers?" He also speaks of the bowling alley as a spiritual place. "We all end up here eventually to be weighed and judged as it is now for you and your friend," he tells Nikki. "Some thought that [Mr. Wrench] should stay behind but I convinced them that he was on a better path now." Who is this man, and why is he talking about this place like he's God?

Paul Marrane certainly hints at a greater knowledge of the universe and the nature of good and evil, which is fitting, as he's named after a famously ambiguous mythological figure. "The Wandering Jew," referred to by the name "Paul Marrane" in the classic text Letters Writ By A Turkish Spy, is an immortal man destined to wander the Earth, having been cursed by Jesus Christ for taunting him on his way to crucifixion. The legend has little basis in the Bible itself, but has transformed over centuries of storytelling. This originally anti-Semitic character has been reimagined in Fargo as a being who may be working hand-in-hand with some kind of greater force. Fargo Season 2 had aliens, and it looks like Fargo Season 3 is upping the ante with angels — or something angel-like.

Before giving her and Mr. Wrench a car, Marrane asks Nikki to deliver a message. Specifically, he asks her to deliver Bible verse Obadiah 1:4: "Though thou exalt thyself like the eagle, though thou make thy nest among the stars, thence will I bring thee down, saith the Lord." Marrane, be he Wandering Jew or biblical angel, sees Nikki as someone who can bring down the unjust. This quality may have been the same thing that drew him to Gloria Burgle in Los Angeles, helping put the pieces in order to bring down the evil that is V. M. Vargas.

Although a famous biblical story is high-minded concept to include in the otherwise relatively realistic Fargo, it's not entirely untrue to the creators of the original film. The Coen Brothers, who created the original Fargo film, have covered discussions of Jewish mythology in their film A Serious Man (starring Michael Stuhlbarg and Fred Melamed, both guest stars in Fargo Season 3), and have previously featured a hero sitting down at a bowling alley bar to converse with an omniscient narrator in The Big Lebowski.

Whoever this man in the Bowling Alley is — if he's The Wandering Jew, God, an angel, or some other spiritual figure — it's clear that this man has a plan, and that Nikki is going to play a part in it.