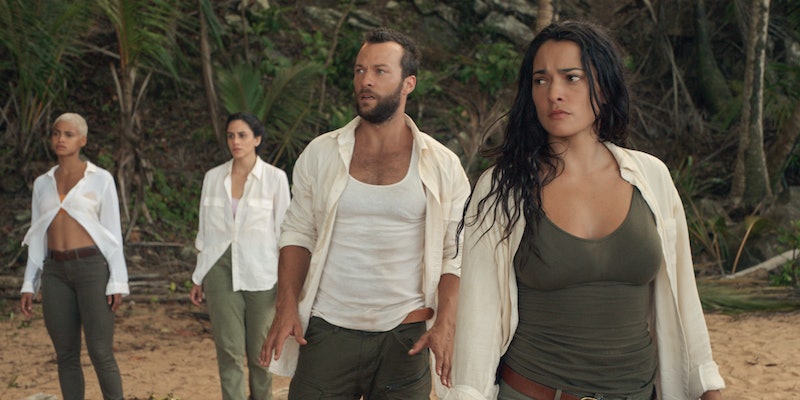 Netflix's new sci-fi show, The I-Land, introduces a lot of questions. Why can't anyone remember how they got to the island? Why were they "chosen" to be there? Who is the random man in black clothing who appears to be in charge? Is any of it even real? One thing that isn't a mystery, though, is whether or not The I-Land will return for Season 2. It's been billed as a limited series, so it's unlikely that it will come back.

Of course, there is some precedence for shows that were intended to be limited series returning for more episodes. But unless The I-Land becomes a sweeping cultural phenomenon in the same way that Big Little Lies did, it's safe to presume The I-Land will be sticking to one season — which may be for the best. As a show front-loaded with mysteries, having a short run time may actually be beneficial to viewers who don't want to wait several years to learn about what's really going on.

Still, that doesn't mean it won't leave you in the mood for more. Luckily, there are already several shows about mysterious islands that could make for great complementary viewing after The I-Land's credits roll.

The I-Land is not the first show to follow a group of people with mysterious pasts being manipulated by a man in black (looking at you, Westworld), but Lost is the prime example. Polar bears, violent and secretive "Others," and menacing shadow monsters haunt and terrorize the survivors of Oceanic Flight 108 — and that's just in Season 1. As the show goes on, more and more mysteries are introduced, many of which are resolved and some of which are still unsolved to this day. While you may not get all the answers you seek, Lost is the quintessential "mysterious island" show.

Arrow is primarily a superhero show, but when it's not following Oliver Queen on his quest to rid Starling City of crime, it's flashing back to the five years Oliver spent on the mysterious island of Lian Yu. What begins as a kind of show-within-a-show about surviving on a deserted island soon becomes a tale of the island's inhabitants and the mercenary forces putting those inhabitants at risk. Lian Yu plays less of a role in the series over time, but Arrow provides just enough breadcrumbs about the island over time to keep audiences hungry for more.

Wrecked takes a more comedic approach to the idea of struggling strangers being stuck on an island, but that doesn't stop the show from creating its own kind of mysteries. By the time the island's true nature is revealed in Season 3, the show morphs from a parody of shows like Lost and The I-Land into a comedic Hunger Games that mixes suspense and mystery with dark comedy.

So while The I-Land probably won't be back for Season 2, there are still plenty of ways to get your mysterious island fix after all is said and done.