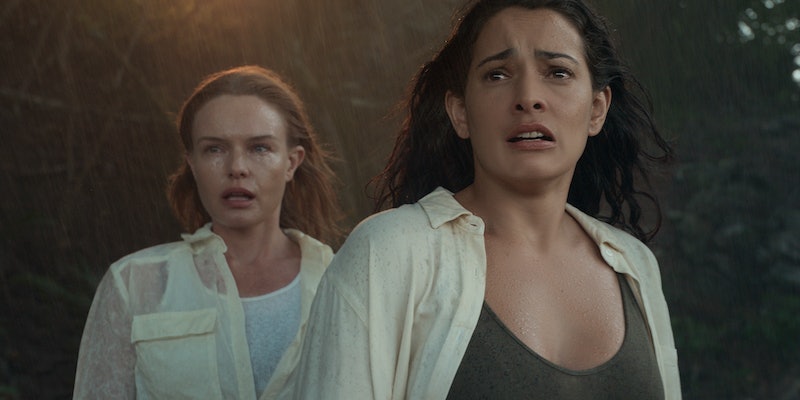 Prepare for a major case of déjà vu, because Netflix's new I-Land trailer is giving off serious Lost and Westworld vibes. If you've watched either of those sci-fi/fantasy hits, then this show's setup is going to feel awfully familiar. Per Netflix's official synopsis, I-Land will focus on 10 strangers who wake up on an island with no recollection of how they got there. Now they have to band together to face the trials this mysterious place has in store for them. Or, as Lost's Jack Shephard would tell the group: "Live together, or die alone."

That's the Lost part of the show's inspiration, but Westworld fans shouldn't feel left out. The trailer suggests that the island is actually a simulation crafted by masterminds watching the castaways from computer monitors. One nefarious looking character explains, "If you die in there, you die out here, too." He also reveals that if the castaways do something wrong, the island will find a way to make them pay. Much like the theme parks in Westworld, the island appears to be some sort of virtual reality nightmare, although this one seems to be less about attracting the rich and famous, and more about doling out punishment to the visitors.

Previously, Netflix teased the show with a Fyre Festival inspired promo, but the trailer hints at a different show entirely. It's revealed that the 10 people were chosen for this experiment, but it's unclear if they were willing participants or if they were forced into the simulation. At the end of the trailer, Kate Bosworth's character tearfully says she remembers her life, but she doesn't sound too happy about having her memories back. It seems likely the characters each did something criminal that landed them in this less than desirable vacation nightmare.

In addition to Bosworth, the series also stars Natalie Martinez, Alex Pettyfer, Ronald Peet, Kyle Schmid, Kota Eberhardt, Sibylla Deen, Anthony Lee Medina, Gilles Geary, and Michelle Veintimilla. The show's synopsis reads, "Faced with the I-Land’s extreme psychological and physical challenges, they must rise to their better selves — or die as their worst ones." The trailer focuses in on Bosworth and Martinez's characters in particular. The two women appear to be at odds with one another, but they're also both shown piecing together the island's mysteries just a little bit faster than everyone else. If the I-Land's main characters are going to be two kick-butt women fighting against a cowboy hat-wearing bad guy, then it's going to be hard to resist checking it out.

So far, there's no sign of a smoke monster or a robot uprising, but the show could still turn out to be good fun, especially for sci-fi fans. The seven-episode series hits Netflix on Sept. 12, making it the perfect length for a quick weekend marathon. And hey, once you make your way through the I-Land's trials, you can always stream Lost or Westworld too. Because, come on, there's no such thing as too many philosophical sci-fi/adventure dramas. As Jack would say, "We have to go back!" — even if we're visiting an entirely different island this time around.

More like this
Watch The Trailer For Netflix’s Edgy New Comedy 'FAKES'
By Brad Witter
Everything To Know About Netflix’s 'Never Have I Ever' Season 4
By Jack Irvin and Gabrielle Bondi
What’s New On Netflix: 'Never Have I Ever' & 'Indian Matchmaking' Return
By Arya Roshanian
What’s New On Netflix: 'Bridget Jones’s Diary' & 'Monster-in-Law'
By Arya Roshanian
Get Even More From Bustle — Sign Up For The Newsletter