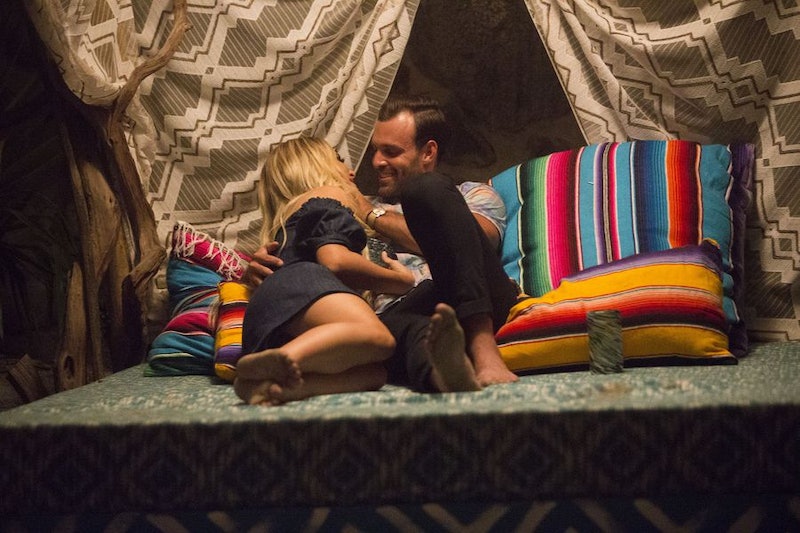 Even though Season 4 of Bachelor in Paradise is still airing, there are two people who haven't made it a secret that they've coupled up: Amanda Stanton and Robby Hayes. There have been plenty of handholding photos and cute social media interactions between the two of them. They are obviously dating, so there's really no point in entertaining the idea that anyone else in paradise is a contender for either of their hearts. They are together for sure, and there are actually a lot of reasons why Amanda and Robby actually make a great couple.

Based on the episodes that have aired, it really doesn't seem like the sparks are flying between them, but it was far from electric chemistry last season when Carly Waddell and Evan Bass met and now they are married. Things between Amanda and Robby are far from that initial Carly and Evan repulsion, but the point is that anything is possible in paradise.

Sure, Amanda seemed to be a little hesitant when it came to the idea of dating Robby based on their initial conversation on Bachelor in Paradise, but it really just makes so much sense for them to be together.

Robby made it all the way to the final two on JoJo Fletcher's season of The Bachelorette. He was the first one to say he loved her out of all the contests, but he got left in the dust even though he was ready to propose in the finale. Ben Higgins eliminated Amanda after he met her children during hometown dates on his season of The Bachelor. Amanda even got engaged to Josh Murray during Season 3 of Bachelor in Paradise. They have both rebounded after some tough public breakups and this is something they can bond over.

2. They Both Live In Los Angeles

Since they both live in LA neither of them has to uproot their current life just to be together. They can both keep their regular routines and date each other without the hassles that come with long distance dating.

3. They Are Taking It Slow

Instead of just jumping in for the kiss on BiP, Robby asked Amanda if she was comfortable kissing yet and she wasn't. Robby had no issue waiting and still continued to pursue her. Not only that, but Amanda was questioned about the relationship during an appearance on The Morning Breath podcast. She said "No," when asked if Robby has met her kids, but she also made it a point to emphasize, "He’s sweet. He’s really sweet." This is a definite contrast from the instant family she got into with Josh after Season 3. Taking things slow is the way to go. There's no need to rush.

Sure, looking like iconic dolls isn't the most solid foundation for a relationship. Nevertheless, if they are already into each other and they just happen to look like a real life Barbie and Ken, this is only a positive bullet point to add to their list. Plus, they have a great option for a couple's Halloween costume this year.

5. They Are Both Social Media Influencers

Robby's listed occupation on BiP is "Social Media Influencer," but he actually is one and so is Amanda. They both endorse products on their Instagram pages. Amanda even has over a million followers. Their followers care about what they're wearing, the products they're using, and which hot spots they're visiting. If they are both influencers on their own, they would be an Instagram power couple together.

6. They Aren't Afraid To Poke Fun At Themselves

Unfortunately being in Bachelor Nation comes with criticism along with the praise. Robby has no issue making fun of himself and he even posted a meme making fun of his "Social Media Influencer" title on his own Instagram page. s for Amanda, she is shown running away from a giant slice of pizza in the opening credits of this season of BiP to poke at her past relationship with the pizza-loving Josh Murray. They are both very much in on the joke and it's nice that they're not taking themselves too seriously.

7. They Hang With A Lot Of Bachelor Alums

Aside from the fact that Robby lives with Bachelorette alums Chase McNary and Jef Holm, both Robby and Amanda hang with Bachelor cast members all the time. It makes sense since a good amount of them live in Los Angeles. Now they can merge their Bachelor squads into one super squad of reality TV stars.

After five combined seasons of looking for love on reality TV, it seems like Amanda and Robby have potentially found a solid match in each other. There are so many reasons why the romance really could work, now the fans just need to wait for this season to finish airing to see if it actually will.