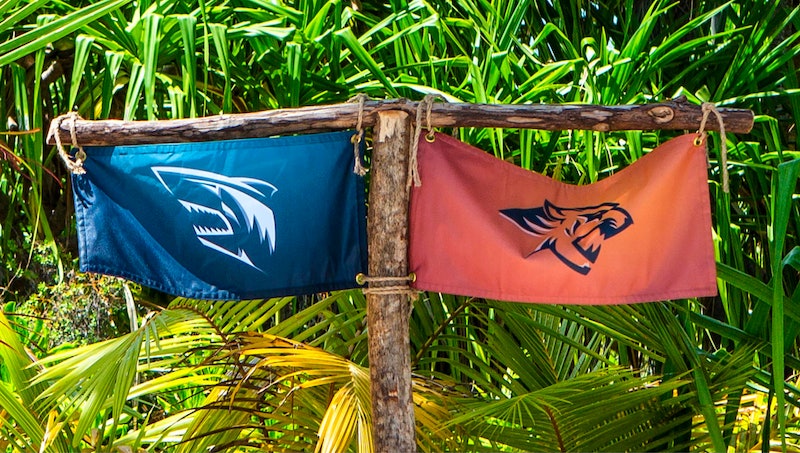 Being sent to a remote tropical island in the South Pacific doesn’t sound too bad, right? Throw into the mix eight other islanders, two teams, and one £50,000 prize pot, and things start to heat up. Shipwrecked is back on E4 at 9 p.m. tonight (Jan. 28) after a seven-year hiatus, and, by the sounds of things, it's definitely been worth the wait. The basic premise of the Shipwrecked: Battle of the Islands still stands, but why are Shipwrecked teams called Sharks and Tigers?

E4 has announced the initial group of nine that will be going to paradise, and the Independent has reported the show will follow a pretty familiar format to its 2012 predecessor. The group will split into two teams: the Tigers and the Sharks. Each team will then compete for new islanders to join them with the aim of being the biggest team at the end of the series. Looks like picking a team really is no joke.

I contacted a Shipwrecked representative to ask why the teams are called the Sharks and the Tigers. He told me:

"It’s what the two tribes have been called since the programme started the Battle of the Islands format in 2006. I guess they’re both ferocious and wild, appropriate for the theme of the show."

Naming the teams after two of the fiercest predators in the animal kingdom is logical. The fight for the prize pot is often fraught, especially at the end, and it hasn’t been uncommon for contestants to use pretty dirty tactics to ensure their team wins over new contestants. Let the battle commence.

The Sharks and Tigers are nearly as old as Shipwrecked itself. Whilst the show started way back in 2000, Shipwrecked: Battle of the Islands was first introduced in 2006, The Sun reports. It is credited with launching the careers of presenters Jeff Brazier and Sarah Jayne Crawford, both of whom appeared in series three of Shipwrecked, according to Digital Spy, as well as TV personality Stephen Bear, who appeared in season eight.

Presenter Vick Hope will be joining the Sharks and Tigers on the new series of Shipwrecked as the voice of the series. Speaking about the show in a press release she said:

“I’m chuffed to be voicing the all new series of Shipwrecked. I was such a fan of the show back in the day on T4, and my friends and I would be so invested in all the tribal twists and turns on Shark and Tiger Island, so it’s a real honour to get to have the first sneak peek at winter’s hottest reality show. There are some amazing characters, epic bombshells and lovely waves of nostalgia ahead.”

Throwing together nine complete strangers on two desolate islands with the incentive of £50,000 to try and win others over, what could go wrong? While hipwrecked may have taken a break, it is definitely back with a bang, and it looks like the Tigers and Sharks are ready to fight it out for victory once again.

Watch Shipwrecked on E4 weekdays at 9 p.m. from January 28