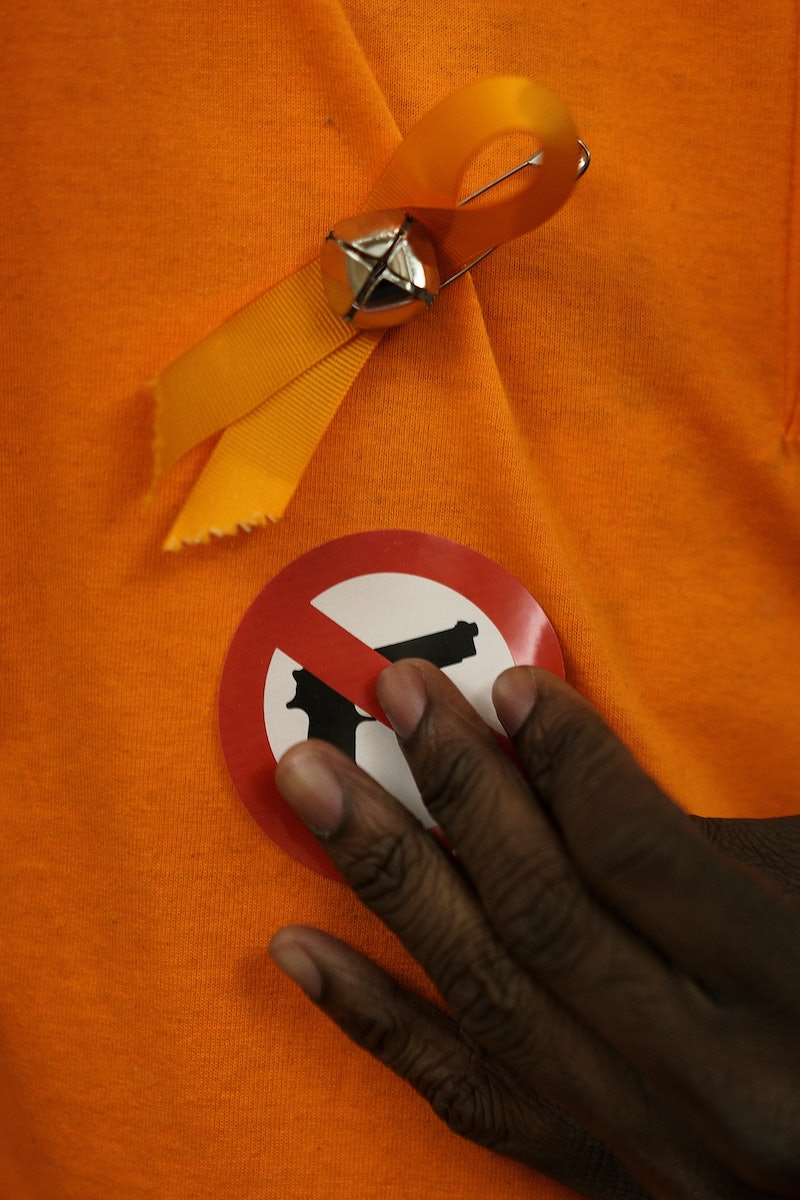 In response to the horrific high school shooting in Parkland, Florida, that claimed the lives of 17 people on Valentine's Day, many young people have rallied in support of gun control. On Wednesday, students across the United States will participate in the National School Walkout while wearing orange. But why the color orange? The reason goes back to a movement dating back to 2013.

The Wednesday walkout takes inspiration from #WearOrange, a movement that began in five years ago, after the tragic gun-related death of a 15-year-old. On Jan. 29, 2013, Hadiya Pendleton died after suffering gunshot wounds in Chicago. Since then, her family has honored the young girl's memory by protesting gun-related violence while donning orange.

On the website for "We Are Orange", the organizers explain their choice,

We wear orange for Hadiya and to honor the more than 90 lives cut short and the hundreds more injured by gun violence every day—and to demand action. Orange is what hunters wear in the woods to protect themselves and others from harm. Orange is a bright, bold color that demands to be seen. Orange expresses our collective hope as a nation—a hope for a future free from gun violence.

Protesters will not only wear orange on Mar. 14, they intend on holding silence for 17 minutes. Just like the color, the number is a deliberate choice as well, signifying the 17 people killed on Feb. 14. One minute will represent one life lost.

Organizers for the walkout have said that that the protest isn't limited to students only; other people are encouraged to participate by wearing orange and, if possible, walking out of wherever they are for 17 minutes. "Whatever feels right to you," the Women's March website says.

The march, which has been planned by the Women's March youth chapter "Empower," has explained the fundamental reason for the walkout in their detailed organizer toolkit,

Women’s March Youth Empower is calling for a National School Walkout to protest Congress’ refusal to take action on the gun violence epidemic plaguing our schools and neighborhoods. Our elected officials must do more than tweet thoughts and prayers in response to this violence.

It added, "Students and allies are organizing a National School Walkout to demand Congress pass legislation to keep us safe from gun violence at our schools, on our streets and in our homes and places of worship."

The walkout won't be limited to symbolic gestures alone. Students also laid out several demands on Mar. 14. According to its organizers, the march has a set of policies that it cosigns and a separate set of policies that it does not agree with. The policies that the National Walkout members agree with, according to their website, include ruling out civilian access to assault weapons like AR-15s, strengthening background checks on those seeking to buy firearms, and the "Stop Militarizing Law Enforcement Act," which was introduced by Georgia Democratic Rep. Hank Johnson.

Policies that the organizers oppose include bills like "Conceal Carry Reciprocity" from last year, which would give every state the power to accept other states' conceal carry permits, essentially freeing the movement of firearms in the country. Plus, the organizers are against legislation that would encourage and incentivize arming school staff. Already, several Republicans — including President Donald Trump — have suggested that school personnel should get firearm training to protect students, but critics say that such an approach could disproportionately hurt students of color as they already face racial bias in the American education system.

In addition to explaining the point of using orange as the signature color for National Walkout Day, the organizers also guided people to know their rights if they plan on participating. If you're interested in joining the cause, you can watch the American Civil Liberties Union explain your basic rights when it comes to free speech, protests, and walkouts.