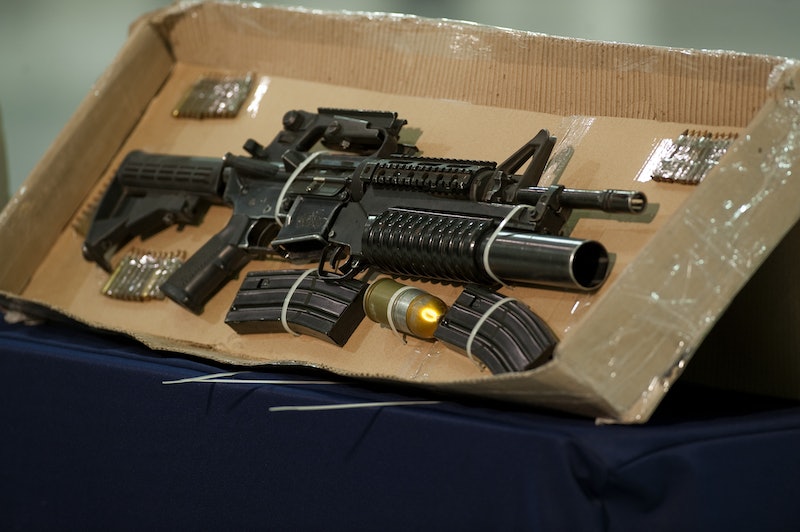 On Sunday night, a gunman opened fire on concertgoers in Las Vegas killing at least 50 people and injuring hundreds. It's the deadliest mass shooting in modern U.S. history, with the gunman firing from the 32nd floor of the Mandalay Bay hotel into a music festival on the ground. According to reports, that a "cache of weapons," including 10 rifles, was found in the shooter's room after the attack.

Knowing that, people may wonder why aren't fully automatic guns illegal? Their ability to quickly and fatally wound hordes of people at once makes these type of weapons extremely dangerous.

Las Vegas and the state of Nevada have some of the most permissive gun laws around. Per Newsweek, Nevada's lax gun laws include that firearms owners don't need licenses, don't need to register their guns, and can own as many as they like. The outlet also reported that "automatic assault weapons and machine guns are also legal in the state as long as they are registered and are possessed in adherence to federal law, according to the National Rifle Association." In addition, gun-owners in the state may carry weapons openly without a permit and can also get a license to carry concealed. Guns with high-capacity magazines are allowed.

CNN law enforcement analyst James Gagliano told the outlet in the aforementioned article just how much damage weapons like that can do.

With such a horrific metaphor as that, it's hard to understand why fully automatic weapons, capable of so much damage, aren't illegal; the reason why is filled with so many loopholes that stop people from being safe if the weapon is in the wrong hands.

According to Daily Kos, it's not illegal for people to own military grade machine guns or other fully automatic guns, but "ownership of these weapons is restricted." But here "restricted" is not as much as you may think: While most average people are seemingly limited from their ability to own these weapons, there are numerous loopholes. Citizens, gun dealers, and gun ranges cannot buy new machine guns, but those purchased prior to 1986 still exist and are traded around — in fact, as Daily Kos reported, "There's about one machine gun for every 1,000 Americans."

As is often the case after a gun-related tragedy like this, gun control becomes a hot topic. Those against laws that allow open carry, machine gun ownership, and unlicensed firearm owning are quick to speak up that events like these show that the country needs more gun control laws. Those on the opposite side, those who are vocal about the right to bear arms, will loudly disagree. It's the same every time, and there are entirely too many tragedies like this one that spark this kind of debate — all the while nothing changes.

As the situation in Las Vegas is an ongoing investigation, it isn't fully known why the shooter committed this act, or how many weapons and what type were used, nor who owned them and whether it was legally or not. All of that will be discovered in time, and it's best to not rush to judgement about whether Nevada's lax gun laws are to blame.

Still, the bottom line is that this event did start up the conversation once more, and also drew attention to the permissive laws on the books in Nevada. Perhaps this attention will push lawmakers to change things for the future. Or, maybe things will stay exactly the same.

But, as tiresome as this conversation can be — as it's been had so many times — it's an important one, and it will likely wage on in the days and weeks to come. Only time will tell if anything changes this time.