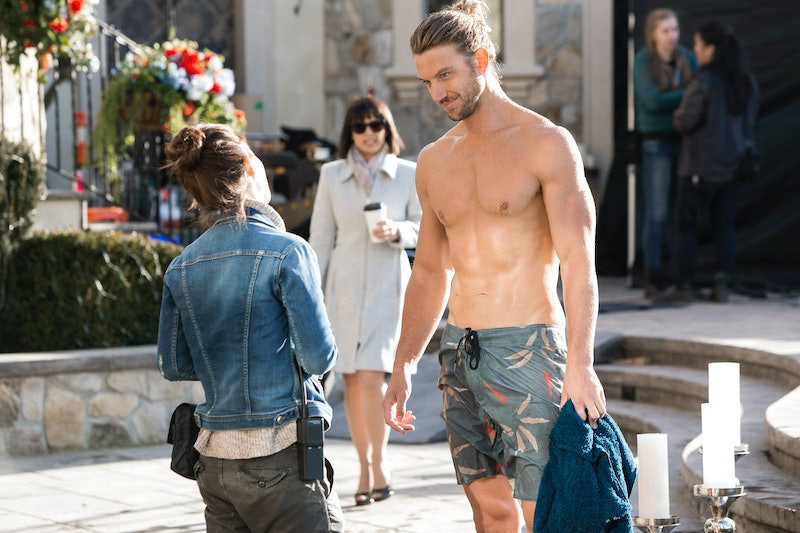 Spoilers ahead for Season 3 Episode 5 of UnREAL.

Every season, UnREAL ups the ante, and in Season 3, they’re taking on their biggest challenge yet — a savvy Suitress instead of a Suitor. But this time, it's not Serena causing the drama so much as the male contestants being willing to stir the pot. One in particular, the man-bunned, hippie do-gooder August, is in a love triangle with Quinn, Rachel, and the “bachelorette” in question. And since this is UnREAL we're talking about, it's probably not going to end well for anyone involved.

"He's taken his eye off the prize and it's come back to bite him," Adam Demos, who plays August on UnREAL, tells Bustle. Not to say that the bite isn’t at least a little deserved: It’s not exactly kosher for a reality TV contestant to start sleeping with the producers of the show. But, Demos says, August is just a man who acted on his attraction to Quinn. “The reality is, August is only human and Quinn’s an attractive, strong woman who owns her power, you know, and he’s only human,” he says. “That’s just the way it went down. When you have a strong woman who knows what she’s doing, that’s extremely attractive."

But August's relationship with Quinn is quickly souring, as he's threatened to expose his relationship with Quinn as sexual harassment instead of the consensual thing that it was. Suddenly, the man who went on Everlasting as the “hippie” and wanted to bring awareness to the causes he supports is unraveling, and August is trying desperately to stay on the show.

“He came on [Everlasting] with goals in mind to create platforms to create awareness, and I feel like he got taken off the path when he got involved with Quinn and Rachel," Demos says. "I think it’s really a survival tactic, so he finds a way to stay on the show and get back to why he originally came on the show. It’s ridiculous, because [his relationship with Quinn was] not sexual harassment. He was obviously up for it, you know? But he’s just trying to stay in the game.”

Staying in the game, though, is difficult with Rachel and Quinn at the helm. When they want revenge, they’ll get revenge, as seen when Rachel sets up August to be groped by a faux park ranger on one of the dates. August decides then and there that he has to show Rachel and Quinn that they can’t push him around. “That just throws another dynamic for August of, ‘Oh my god, who did I just get into bed with?’ Literally and figuratively,” Demos says of August’s mindset. “They’re capable of absolutely anything, so I do think that he was just massively naive going into this whole thing. Now seeing it, he’s like, I’m going to have to go in with my own game and get them to leave me alone.”

August eventually spills the beans to Serena that her new frontrunner Jasper is only on the show to win a bet with his friends. According to Demos, it’s as much an act of valor as it is of desperation. “I feel like Serena is falling for this Jasper character even though he’s betting on her, so I feel like there’s a point where August really does care about her emotions,” Demos says. “It’s also like, well, I stopped up, too, and you’re stuck on this guy who’s stuck on winning you, like you’re some prize, so let’s just get it all out there and clean the slate almost. It’s August’s chance to say, you know, I’ve done some bad things, but the other blokes have, too, so just give me a shot. Of course he wants to stay on there.”

According to Demos, viewers should look for Serena and August to “have a spark,” but in reality, Season 4, which is set to air in 2019, is where August’s big plays will happen. “For August, it’s just he learns so much about being on the previous season, so he’s going in there with quite a confidence about it,” Demos says “Also, there’s that…. there’s a hint of feelings for Quinn and Rachel, and you can’t just let those go when you have feelings for people, so that may get thrown into the mix as well. Season 4 is all-stars, so putting the guys and girls together is a whole other dynamic.”

For now, though, in Season 3, August will have to deal with not only winning back Serena’s trust but also all of the other male contestants, who, in a fit of jealousy and rage, went so far as to cut off August’s man bun. Demos, though, wasn't quite as sad about losing his character’s signature hairdo.

“That man bun was for the show! That was extensions for me. I have to thank the writers for whoever cut it off," he says, pointing out that his hair extensions took six hours on his first day. Demos won't fully disavow the man bun, though. "It highlighted the character and what he was about, so it was cool… Once I put that bun up, I was ready to go.”

Man bun or shorn locks, August is here to stay on UnREAL, and he’s not letting anyone — Quinn, Rachel, or another contestant — get rid of him.